Dynamic Philosophies of Life: Imaginary Dialogue Between Laozi and Socrates 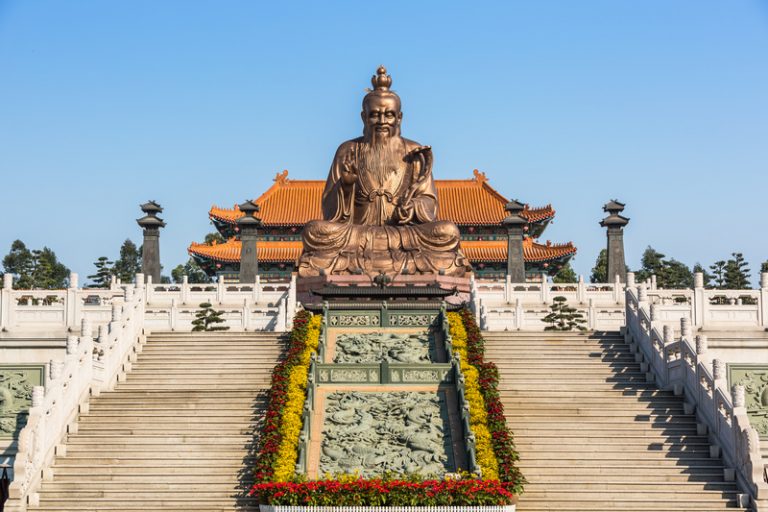 Laozi and Socrates are iconic founders of Eastern and Western philosophies of life. (Image: via Dreamstime.com © Matee Nuserm)

The period between 800 B.C. and 200 B.C. is known as the most glorious era in the history of human thought. During this time, people of great wisdom, who laid down the philosophies of life and the belief systems for later generations, appeared in the East and West. Two of those great sages, Laozi and Socrates, are the protagonists of this article.

“Be content with what you have; rejoice in the way things are. When you realize there is nothing lacking, the whole world belongs to you.” Laozi

Of these two sages, one laid down the philosophy of Taoism for Chinese civilization, and the other laid down the Greek philosophy that provides the foundation for all of Western philosophy. At about the same time in history, they shaped the main moral values ​​and spiritual core of Eastern and Western classical culture.

Laozi’s belief and practice focused on the universal principles of living in harmony with nature and the natural order of Heaven and Earth.

Philosophies of life by Laozi and Socrates

The two sages are towering in their scope and insights into life and the cosmic order. Laozi left behind the Taoist classic Tao Te Ching. This is a brief summation of life based on the order of nature and the eternal laws of the Cosmos. It is written with around 5,000 Chinese characters. He was able to discover the cosmic order. He presented a philosophy of life called the Tao, or the Way.

The Tao is based on living in harmony with the cosmic law, heaven, and earth. Laozi’s philosophy emphasizes being part of everything, harmonize with everything, flow like water, be humble, and don’t be attached. He did not expect the world to fully understand his words, so he left the Central Plains from Hangu Pass and headed for other places.

Socrates (c.470 – 399 B.C.) was a Greek philosopher from Athens. He is credited as one of the founders of Western philosophy, and as being the first moral philosopher of the Western ethical tradition. Socrates wrote no texts in his day. Much of what we know about Socrates comes down to us in the Complete Works of his eminent student, the Greek philosopher Plato, and others.

Socrates believed that virtue was sufficient for happiness. His method was to help people find out truths for themselves, how to narrow things down and sift out the truth and the facts; if something is not possible, then what is left? Socrates believed that to live a life of virtue, live by moral codes, and live a just life were the best ways of all. He believed in taking the middle way, and not to overreach. This way of life he believed leads to contentment and happiness.

Socrates was a great believer in the freedom of the individual, the pursuit of happiness, truth, goodness, and justice. He encouraged people to free themselves from their false beliefs and self-deceit. His philosophy gave rise to the belief that divine intelligence guides the world for the best. He believed that we must strive to discover the truth, for therein lies happiness and virtue.

Due to his outspoken criticism of what he regarded as the moral corruption of Athens and their reliance on the practice of “might is right,” he made powerful enemies of the ruling class of the city-state and the aristocrats. He wanted to help people to live moral lives and discover universal truth. Socrates did not claim to have any wisdom or to know anything. Ironically, in this way, he was able to prove that he was much wiser than everyone else in Athens who claimed that they knew something, and upon examination were found to not know anything.

Let us imagine a meeting between Laozi and Socrates

If these two highly esteemed sages had met each other during their lifetimes and agreed to share their insights about the mysteries of life, time, space, the order of nature, the eternal world, football, music…, what profound wisdom would they have left us?

Let us speculate and imagine some using the knowledge we have today to search for inklings about their perspectives on life and their wisdom. What would they think of us today?

Socrates says: “The rich people are contented because contentment itself is wealth.”

Street vendors in the city calling out to promote their goods under the neon lights, bustling and whistling everywhere, feasting, singing, and dancing in the bar, noisy fights happening everywhere.

Socrates says: “Above all the noise, quietness is the most profound melody.”

Laozi responds: “Quietness is when there is no desire and the universe will naturally be stable.”

Laozi says: “Yes, knowing others is clever, and knowing yourself is enlightenment.”

At this time, a wealthy young man passing by overhears their conversation, and he feels that their words were full of wisdom. Despite his wealth, he is overwhelmed by sadness.

He tries to escape his sadness by buying expensive things and meeting beautiful women. Yet the happiness procured is short-lived, so he approaches the two sages and asks for the secret to true happiness.

Laozi sighs: “Something rare and precious makes one abnormal and causes harm.”

Socrates says: “The secret of happiness is not to seek more but to be able to be happy even if you get very little.”

Socrates continues: “The fewer our needs, the closer we are to the gods.”

At this time, a religious scholar passing by overhears their conversation about gods, so he could not help showing off his knowledge. In front of the two sages, he talks about the origin, history, and doctrine of religions around the world.

The two sages listen and smile at each other.

Socrates says: “I cannot teach anybody anything. I can only help them think.”

Lao Tzu says: “Those who know do not speak. Those who speak do not know.”

The scholar came to realize that these two are wise people and he was in no position to teach them, so he left.

In history, there have been countless scholars who had read up to 10,000 books, but no one remembers them as they could not leave behind a single word of wisdom. The profound wisdom and the philosophies of life in the words of a sage cannot be obliterated even after thousands of years.