Revolution: For the Love or Hatred of Humanity 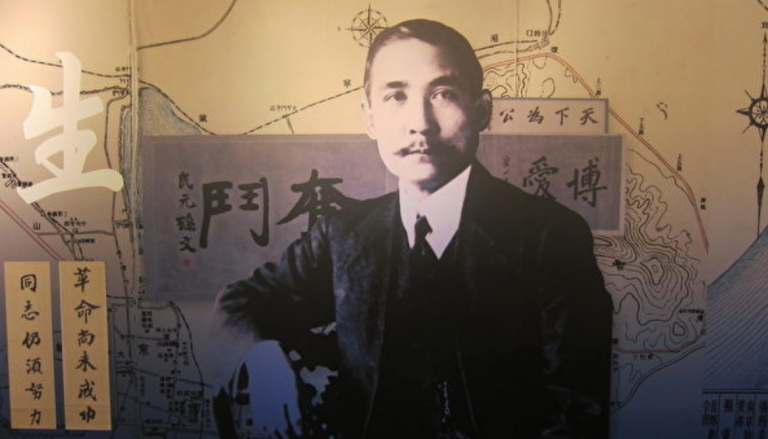 In the Three Principles of the People, the founding father of the Republic of China, Dr. Sun Yat-sen, especially advocated these eight cardinal virtues and referred to them as the inherent morality of the Chinese nation. (Image: via The Epoch Times)

Guilin is a place that greatly influenced modern Chinese history and the Communist revolution specifically. Most people know that the city of Guilin in southern China is well-known for its beauty, and the Southern Song literati Wang Zhenggong’s poem summed it up with the words “Guilin’s landscape tops the world.” Still, few know that Guilin is also famous for its historical and cultural significance.

After Sun arrived in Guilin, he stayed in the royal palace of a former Ming Dynasty prince. During his stay, he gave three famous speeches that drew large audiences and supporters. While organizing the army for the Northern Expedition, he also traveled to Qixingyan (Seven Star Rock) in his spare time, socialized with the locals, and had his guards build roads. During Sun’s four months residency in Guilin, he convened with Maring in December 1921.

During the First World War, after the Russian revolution abolished the monarchy, Lenin established a communist government, the Union of Soviet Socialist Republics (USSR). In the initial stage, the government was very friendly to China. It voluntarily announced that it would abandon all its privileges in China during the imperial era and forfeit the Boxer indemnity. At the same time, it expressed its sympathy for the Chinese Kuomintang and its willingness to help the nation once oppressed by imperialism. The gestures were very tempting to many young people in China and led them to believe that the Soviet Union would treat China equally.

In 1921, Chen Duxiu and others formally established the Communist Party of China in Shanghai and held the first National Congress. The following year, a meeting was held in Guangzhou, announcing that the Chinese Communist Party was a branch of Communist International.

Arguments over the Chinese revolution

At this time, Maring believed that he would cooperate with the Kuomintang and use it as a springboard to infiltrate China, so he went to Guilin to visit Sun for talks. In the beginning, Maring expressed his sympathy, support, and friendship for the Kuomintang, and the meeting went well. But when the discussion hit the critical issue — the view of the revolution — conflicts emerged between the two. In the end, the meeting broke up.

Zhang Ji, the Minister of Propaganda of the Kuomintang, recorded the dialogue on the Wuhan Joint Conference minutes:

Maring asked at the beginning: “What is the principle of your revolution?”

Sun replied: “China has a tradition, derived from Yao, Shun, Yu, Tang, Wen, Wu, Zhou Gong, and Confucius, one after another. My ideological foundation is based on this tradition, and my revolution is to inherit this tradition and carry it forward.”

The Chinese culture is extensive and profound, but Maring couldn’t understand the meaning; therefore, Sun tried to explain the tradition and the revolution with simple words.

Sun briefly answered: “I am revolutionizing for the love of mankind!”

After hearing the answer, Maring disapproved and replied: “Revolution for loving humankind is difficult to succeed. We Communists are revolutionizing for the hatred of humankind.”

The distinctions between love and hate of the people

After the death of Sun, President Chiang Kai-shek succeeded him in leading the National Government. Chiang once said in a speech that Premier Sun’s eyes were full of the fact that the authorities oppressed the Chinese people and the people’s cry for survival, so he assumed the responsibility of saving the nation and led the people to carry out the revolution. His revolutionary motive was for the love of the people. During the process, arbitrary killing was not allowed. After success, society could achieve peace.

The Russian people were full of anger and resentment toward its ruling class because they were oppressed by tyranny and exploited by landlords. The Communist Party took advantage of the radical hatred by inciting the so-called proletariats to attack other classes’ citizens for its own gain.  Therefore, their revolution was based on hate, and their tactics were ruthless and brutal. Even after the revolution was successful, society would still be filled with hatred and struggle.

Twenty-some years later, the Chinese Communist Party employed the same psychological tactics to seize power in China. Today, you can see the two revolutionary concepts on full display on both sides of the Taiwan Strait — a democratic government in Taiwan based on the love for its people, and a Communist-ruled mainland China based on the hatred of its people.