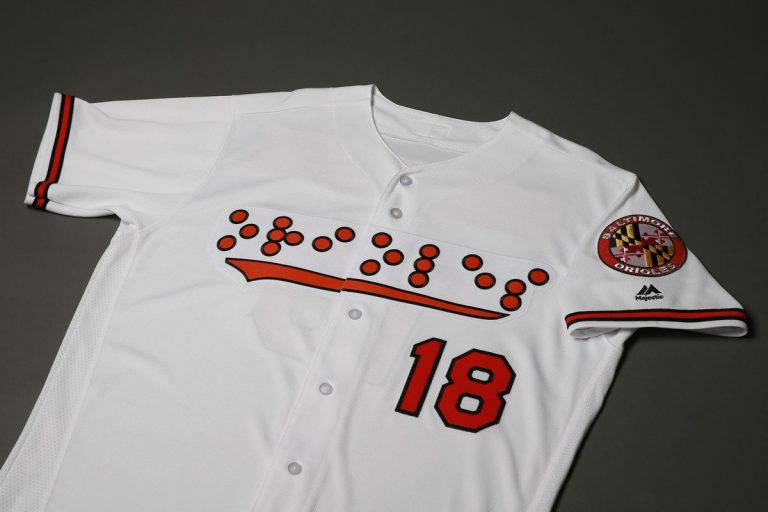 On the front part of the players’ jerseys, the word Orioles was spelled out in braille. (Image: Baltimore Orioles)

This event took place during a baseball game at Camden Yards, where the Orioles were playing against the Toronto Blue Jays. On the front part of the players’ jerseys, the word Orioles was spelled out in Braille. On the back of the jerseys, the names of the players were also lettered using Braille. To understand what was written in Braille on the jerseys, Braille alphabet cards were distributed among the fans at the venue.

Along with Braille lettering on the uniform, the team invited Carlos Ibay, who is a blind concert pianist. He sang the national anthem at the event followed by the first pitch by Mark Riccobono, the NFB president.

Braille is one of the most popular ways blind people communicate

Riccobono praised the initiative taken by the ball club, noting that it will help and inspire blind people. He also said that Braille is one of the most popular means that blind people use to communicate. Riccobono also said that he and his organization applauded the idea of using Braille lettering on the players’ uniforms.

The NFB’s Director of Public Relations, Mr. Chris Danielsen, said that along with baseball, many other sports were exclusively broadcast on the radio before the age of television. He also mentioned that both blind people and fans with eyesight continue to enjoy radio broadcasts of baseball games.

The jerseys with Braille lettering were signed and auctioned off on the Orioles’ team website. The money from the auction went to the National Federation of the Blind. Also, one of the jerseys was sent to the Baseball Hall of Fame to be kept as a keepsake.

It is very inspirational to know that a pro sports organization like the Orioles is willing to bring this to the forefront by wearing Braille front-and-center on their uniforms. It’ll be interesting to see if other teams across different sports will follow suit, but for now, the Orioles will proudly lead the way in this department.