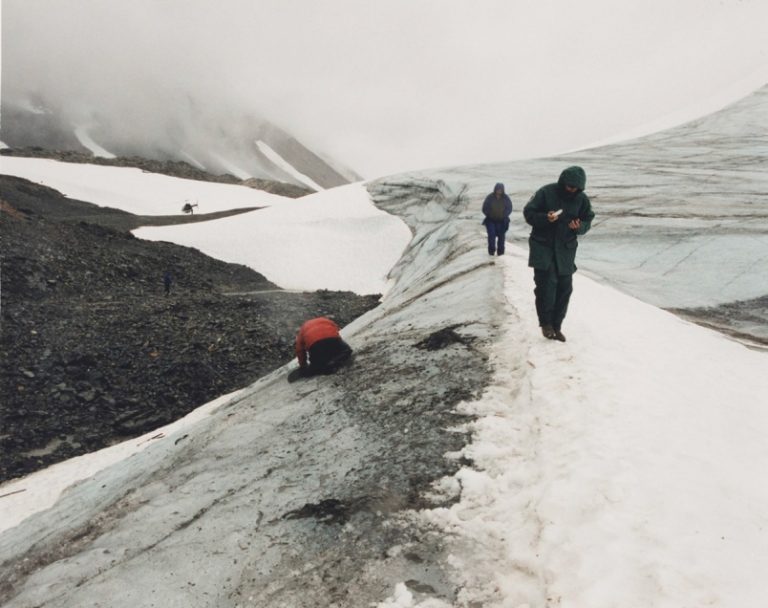 View of the glacial edge high in the Tatsenshini where Kwäday Dän Ts’ìnchi was found in 1999. (Image: Al Mackie via Northwest Coast Archeology)

The efforts to trace the root of humans have yielded fascinating results over the decades. One such instance is the “Canadian Ice Man” whose remains were found in a melting glacier in British Columbia, Canada. The discovery of remains of fossilized ancestors of present-day humans throws up intriguing details and challenges to existing theories.

In August 1999, three hunters — Bill Hanlon, Mike Roche, and Warren Ward — were hunting sheep in Tatshenshini-Alsek Park in the northwestern-most corner of British Columbia. The hunters were walking along a glacier, above the tree line, and noticed some bits of wood, which they thought unusual given their location. They examined the wood and noticed carvings and notches, possibly indicating the wood formed the frame of a backpack. Searching with binoculars, they saw the body of the “Canadian Ice Man” in the ice. They later discovered bones, traces of fur, and a walking stick buried in a melting glacier.

They reported their find to Yukon’s archaeology department staff and turned in a number of artifacts they collected from the site.

Before making a public announcement, the archaeologists notified representatives of the Champagne and Aishihik First Nations, whose historical territory was the location of the body. They visited the site and decided to name the person Kwäday Dän Tsʼìnchi, which means Long Ago Person Found. A team of archaeologists was assembled to assess the find, and the First Nations were further consulted about the project. They supported having scientific studies done, including DNA analysis.

Identity of the ‘Canadian Ice Man’

Kwäday Dän Tsʼìnchi represents the oldest well-preserved human remains in North America. The young man was estimated to be approximately 18–19 years old at the time of death. The cause of death is unknown, but there appears to be no sign of serious injury, and hypothermia is a possibility.

He died near the onset of the Little Ice Age. An examination of the food in Kwäday Dän Tsʼìnchi’s digestive tract reveals that he had traveled a distance of around 62 miles in the three days prior to his death, from the coastal region up to higher elevations where he was found. Based on pollen found in the contents of his colon, he was traveling in the summer.

Tissue studies revealed that his long-term diet consisted principally of shellfish and salmon, indicating that he was originally from one of the communities near the Pacific Ocean coast; however, hair samples indicated that his diet over a couple of months before his death had been more strongly meat-based than usual, suggesting that he had spent some time inland. His stomach contents included beach asparagus and he was carrying salmon and shellfish with him, suggesting that he had been back at the coast again and was traveling back inland to the Tatshenshini River at the time of his death.

DNA testing of more than 240 volunteers from the local Champagne and Aishihik First Nations revealed 17 persons who are related to the “Canadian Ice Man” through their direct maternal line.

However, traditional tales of Yakutat Tlingit, southern Tutchone, and the Chilkat may provide a clue, as folklores made mention of villages that used to exist on the bank of the Tatshenshi River. Kwäday Dän Ts’ìnchi was possibly traveling to one of these villages.

It is assumed that many other persons also died in the same time span as the “Canadian Ice Man,” but their remains have yet to be uncovered.