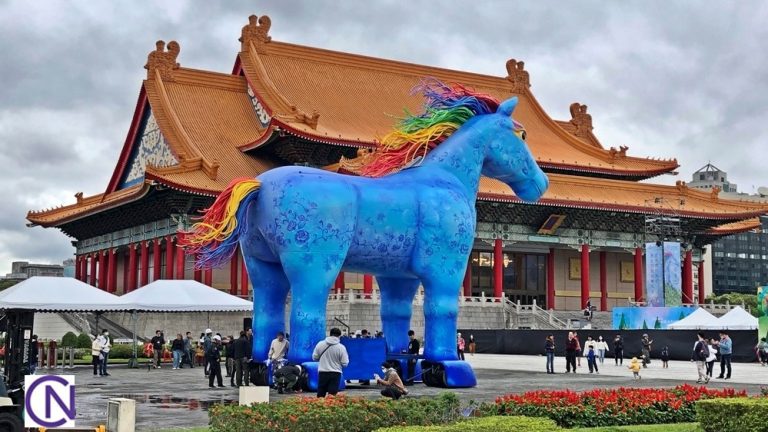 It was sponsored by the Hakka Affairs Council, a ministerial-level government agency under Taiwan’s Executive Yuan, to promote the Hakka culture and Hakka language in Taiwan.

Settled on a high mountain, there once existed a unique village populated by two tribes. One thing special about the tribal settlement was that a miraculous horse would descend from the sky whenever it was going to rain. Nobody knew what color the horse really was, as it always changed colors very quickly.

The story nevertheless centered around three courageous kids who tried to alleviate the conflicts between the two tribes who were suffering from the monkeypox virus and a drought.

The performance was organized by a famous Taiwanese children’s theater troupe, “Paper Windmill,” and was held at the plaza between the National Concert Hall and the National Theater at Taipei’s iconic Chiang Kai-Shek Memorial Hall in mid-March 2021.

The highlight of this show was an enormous blue Rain Horse, which was 10 meters (32.8 feet) high, 13 meters (42.6 feet) long, and 4.5 meters (14.7 feet) wide at the shoulders. Moreover, the three-story-high horse had a rainbow-colored mane and tail. It was moved slowly from the Memorial’s enormous white archway to the center of the plaza during the performance.

Additionally, the striking giant statue was displayed at the plaza of the National Dr. Sun Yat-sen Memorial Hall for two days after the completion of the performances at the Chiang Kai-Shek Memorial Hall.

Since Hakka people are one of the linguistic minorities in Taiwan, the event was aimed at promoting Hakka culture and the Hakka language, and showing caring and blessings through performing arts while the COVID-19 pandemic is still prevalent around the world.

In the meantime, as Taiwan is faced with its worst drought in 56 years, the Hakka Affairs Council also hoped that the miraculous Rain Horse would be able to bring more rainfall to ease the current alarming drought situation in Taiwan.

The Hakka Affairs Council actively promotes Hakka culture in Taiwan. Over the years, a variety of similar events have been held one after another.

In 2010, the first Hakka children’s musical drama performance in the world, Hey, Small Kid (Hey, A Di Gu! 嘿！阿弟牯) was presented. Thereafter, the Tale of Tonghua Island (桐花島的故事),” and the JhugeShiro (Hero of Heroes 諸葛四郎) were performed in 2016 and 2019 respectively. All of these extravaganzas have truly been a delight for children and adults alike over the years.