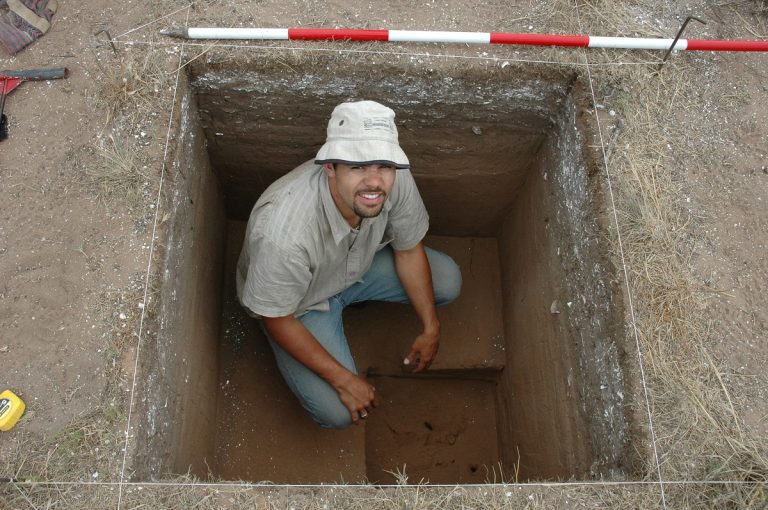 Dr. Christopher Wilson has worked at the excavation since before 2008 when the artifact was found. (Image: via Flinders University)

The discovery of a rare bone artifact near the Lower Murray River casts more light on the rich archaeological record of Ngarrindjeri country in southern Australia. Details of the Murrawong bone point, dated between c. 5,300 and 3,800 years old, have been described by Flinders University, Griffith University, and other experts in a new paper in Australian Archaeology.

Probably made from a macropod (kangaroo or wallaby) bone, the point was likely used for piercing soft materials — for example, used as a pin on a cloak made of possum furs — or possibly as a projectile point, say the research leaders Dr. Christopher Wilson and Professor Amy Roberts from Flinders University Archaeology.

While stone artifacts and shell middens are commonly found on the surface, bone objects are mostly uncovered during excavations. The last similar one uncovered in the Lower Murray River Gorge was in the 1970s. Dr. Wilson, a Ngarrindjeri man, says:

“Even one find of this kind provides us with opportunities to understand the use of bone technologies in the region and how such artifacts were adapted to a riverine environment.”

“Bone artifacts have lacked the same amount of study in comparison to artifacts made of stone, so every discovery reminds us of the diverse material culture used by Aboriginal peoples in this country.”

The bone artifact was found during recent excavation work. The project was undertaken in collaboration with the Ngarrindjeri community. This research forms part of a larger project that Dr. Wilson is leading to investigate the rich archaeological record of the Ngarrindjeri country.