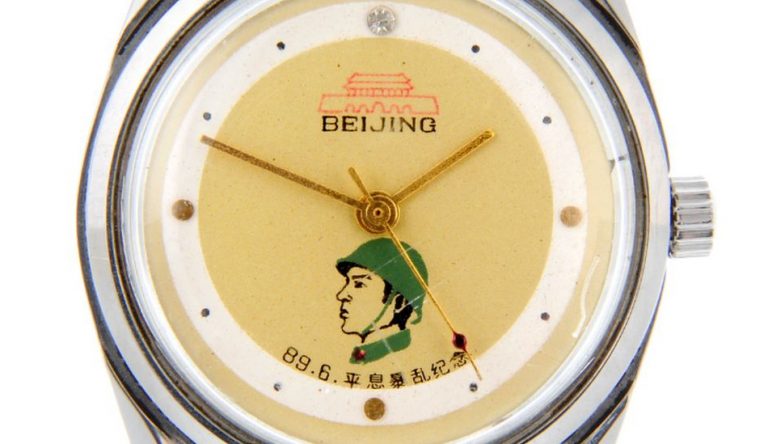 A UK auction house specializing in luxury watches and unique pieces of jewelry has withdrawn a watch given as a reward to Chinese soldiers who participated in the Tiananmen Square Massacre. (Image: via Fellows)

A UK auction house that listed a rare Tiananmen Square wristwatch “given to troops by the Communist Party Beijing Committee and Beijing Municipal Government” with a green-helmeted soldier on the face along with the words “to commemorate the quelling of the rebellion” had to withdraw the item from its online catalog following reactions on social media to the sale.

The watch would have been given as a reward to Chinese soldiers who massacred unknown numbers of pro-democracy citizens on June 4, 1989 (known as the Tiananmen Square Massacre).

According to the Birmingham-based Fellows Auctioneers, which specializes in “luxury watches, designer brands and unique pieces of jewellery,” the watch was priced to sell for between US$3,400 and US$4,800. Its provenance was carefully researched. The Tiananmen Square wristwatch watch face contained a red-colored outline of Tiananmen Square at the top along with the soldier wearing a green military helmet and the text “89.6 to commemorate the quelling of the rebellion.” The back of the watch was engraved with “the Beijing Municipal Committee of the Chinese Communist Party & Beijing Municipal People’s Government.”

Despite Fellows confirming that “to the best of our knowledge, the vendor is not associated with the PLA, nor the Chinese government,” views on social media were that the watch constituted “admissible evidence and the owner should be traced and tried for the massacre which China tried to cover up.”

After the death of the outspoken Hu Yaobang, General Secretary of the Communist Party of China, martial law was declared to quell protests caused by fear and uncertainty of China’s economic future, the opening up of the country, and corruption and favoritism in the government. Protesters went on hunger strikes, started mass sit-ins, and occupied Tiananmen Square and other public spaces.

Ordinary Chinese people created human barricades to stop the People’s Liberation Army (PLA) from entering the public spaces and were shot at, many from behind. Former British Ambassador to China Sir Alan Donald wrote: “The 27 Army APCs [armoured personnel carriers] opened fire on the crowd before running over them. APCs ran over troops and civilians at 65 kph [40 miles per hour]” and were followed by bulldozers that were sent to scoop up the lifeless bodies that were then incinerated and washed down drains. The number of people killed is not known, but the Chinese communist regime’s own internal assessment placed the number at 10,454. (Independent)

The incident was captured in one of the most recognized photographs of all time: the actions of the anonymous solitary protester known as “Tank Man” by AP photographer Jeff Widener and British photographer Stuart Franklin on June 5, 1989, one day after the Chinese military crackdown. The incident has been memorialized by the Chinese people as representing the Tiananmen Square Massacre.

The Chinese Communist Party (CCP) leadership has always maintained that the student movement was “a counter revolutionary rebellion, unprecedented in the history of the Republic.” According to the book Beijing Spring, 1989: Confrontation and Conflict — The Basic Documents, Military spokesperson Zhang Gong reported to foreign journalists in a press conference called on June 6, 1989, that no one was killed in Tiananmen Square and no one was run over by tanks in the Square.

The Party leadership position was that the dead were soldiers defending themselves from those rebelling and put out initial figures stating that 5,000 PLA soldiers were killed. In contrast, only 300 of the counter-revolutionaries had died. Other reports then said it was only 200. One only has to look at the famous “Tank Man” photos of the time to see the massive line of tanks and tiny lines of protesters to understand that this is a reversal of the facts. China had already closed foreign media channels and restricted foreign journalists and fed them the Party line.

In an unusual twist to censorship of free speech and democracy, Bill Gates sold his photography collection owned by Microsoft’s Corbis Entertainment, containing the archive of “Tank Man” photos, to Chinese media company Visual China Group (VCG) in 2016, with VCG becoming the distributor both inside and outside China. Proponents of free speech are concerned that this will allow more CCP censorship inside China and that VCG will completely censor the Tiananmen images within the Great Firewall.

This is not the first time that a copy of the handmade Tiananmen Square wristwatch by artisan watchmaker Xu Yaonan from the Chinese state-owned Beijing Watch Factory has appeared for sale. Xu told the BBC that he “made tens of thousands of them really well” and that a watch was one of the three things that people really wanted to own back then, the other two being a sewing machine and a bicycle. Xu was not willing to discuss the Tiananmen Square wristwatch further as he said that the subject was still sensitive. He was clearly proud of the quality and said that the very big order of the Tiananmen Square wristwatches by the Beijing Mayor had helped the factory through tough times. As he was allowed to speak to Western reporters in China in 2015, the interview content would have been censored.

In 2007, a Tiananmen Square wristwatch was posted for sale on eBay in a protest action to raise awareness by the owner, a former PLA elite officer who, according to him, was among troops who were given the Tiananmen Square wristwatch. He would not reveal any details to protect his family from reprisals by the CCP. The sale proceeds of the eBay auction were to be donated to the Tiananmen Mothers Campaign, a Chinese democracy campaign headed by a retired professor of philosophy, Ding Zilin, now 84 years old, whose 17-year-old son Jiang Jielian was killed in the massacre on June 3, 1989. The group is campaigning for justice for those who were shot and killed by the soldiers, and Ding’s objective is to get the CCP to admit the deaths and make a public apology.