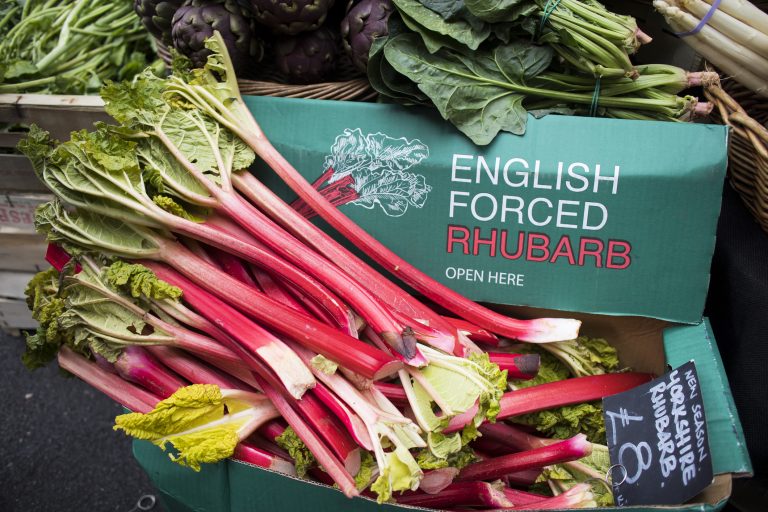 Yorkshire forced rhubarb (Rheum rhaponticum) is an out-of-season rhubarb that is first grown outside for a period of two years so that the exposure to frost toughens the roots. (Image: Elena Rostunova via Dreamstime)

Forced rhubarb was a popular trend in the early 19th century, but the process is laborious, and not many people are inclined to putting the effort into producing this winter rhubarb in the English countryside. Life is a circle that often keeps repeating patterns. The adage that history repeats itself is true as every form or culture makes a reappearance after a certain time and becomes the trend. Now, forced winter rhubarb is making a comeback.

For 59-year-old Jonathan Westwood, the tradition was started by his great-great-uncle in 1870 Yorkshire and has become his passion. A farmer by profession, Westwood grows forced rhubarb in what is known as the Rhubarb Triangle of Yorkshire, England. Taking over the family business 15 years ago from his father, he continues the painstaking but sweet tradition of harvesting forced rhubarb.

What is forced rhubarb?

Yorkshire forced rhubarb (Rheum rhaponticum) is an out-of-season rhubarb that is first grown outside for a period of two years so that the exposure to frost toughens the roots. After initial exposure to the frost, the rhubarb is lifted from the ground and placed into forcing sheds. Once in the darkened sheds, heat is applied to cause the rhubarb to grow quickly in search of light.

Why grow and harvest rhubarb in the dark?

Growing rhubarb in the dark, which means total darkness, accomplishes two things. First, the rhubarb stalks grow faster than usual as the plant searches for light to make chlorophyll. Second, the sweet glucose produced in the rhubarb that would normally be used to grow the plant’s huge leaves is instead stored in the stalks. This means that the stalks of forced rhubarb are sweet instead of sour.

During forcing, the rhubarb plants will be on the alert for even the tiniest bit of sunlight so that they can begin their natural growing process. Even the beam from a flashlight would be enough to break the forcing! For this reason, the rhubarb is harvested by candlelight to maintain the tenderness of the shoots and ensure that growth continues.

If the crowns are exposed to too much light, they will cease to grow and photosynthesis will occur resulting in a bitter flavor. The stalks are harvested by hand to prevent other crowns from rotting due to botrytis. After the rhubarb is harvested, the crowns are composted, ensuring more sustainable production.

The forcing of rhubarb began in Yorkshire in 1877, the first place in the world to construct special forcing sheds. Cheap coal from local mines heated the forcing sheds, which helped produce rhubarb early in the year when fresh fruit was scarce. West Yorkshire once produced 90 percent of the world’s winter forced rhubarb. In the late 1960s and early 1970s, many small fields that had been used to grow rhubarb were sold for building houses, as they were very close to urban areas.

Why force the process?

The growing process produces rhubarb that is sweeter and more delicately flavored, with an especially vivid red color. In terms of color, the inside of the stem is a bright white, with the outside a vibrant blood red.

The plant is fickle at its best. While it thrives during the winters, if you have soil that is too wet or weather that is too hot, say goodbye to your plants. And you have to spend over 10 winters properly caring for and understanding the plants before you move on to the forcing stage. In a way, the rhubarb plants teach you patience and perseverance. But the final sweet and pale rhubarb is worth all the hard work you have put into the plants. It also teaches you to reconnect with nature and understand her language of weather and soil.

With correct timing, the product can be harvested in the spring when rhubarb cordials are in high demand. While only a handful of farmers are willingly taking up forced rhubarb cultivation, some over 300 tons of the produce is sold to high-end grocery stores. It is said that even Buckingham Palace is into forced rhubarb.

Such is the status of forced rhubarb that it was added to the European Commission’s Protected Designation of Origin (PDO) list of its protected regional delicacies. Hence, Yorkshire forced rhubarb shares a similar status as French Champagne.