Kombucha: What You Need to Know About This Awesome Drink 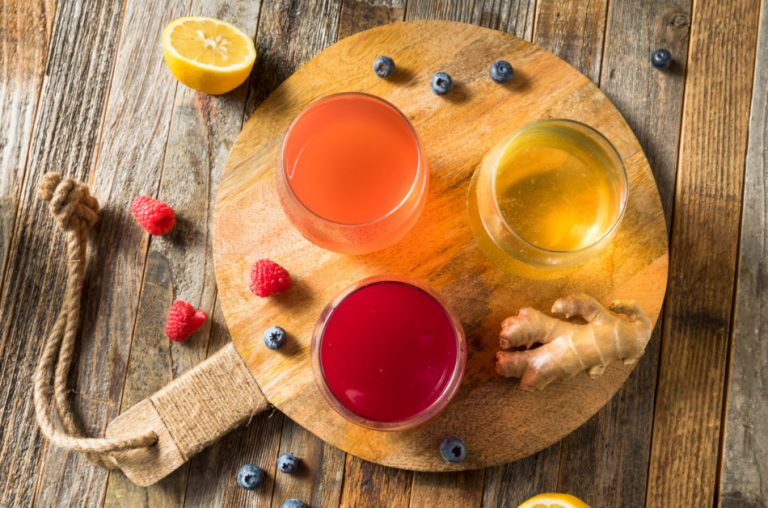 People resort to consuming various types of health drinks and herbal beverages for enhancing immunity and obtaining numerous benefits. It is quite commonplace to see people in your group of friends or professional circle opting for beverages like green tea or coconut water. However, there are other healthy beverage options many don’t yet know about.

One such example is kombucha. It has been made mostly by home-brewers, but with time, kombucha has begun making an appearance on the menus of eateries and pubs. Those wary of sugar-laced soft drinks or the side effects of energy drinks can give it a try!

Kombucha is a beverage that is prepared by fermenting tea with a symbiotic culture of bacteria and yeast (SCOBY). When the fermentation happens, the yeast changes the sugar content in the tea into alcohol. The bacteria then turn the alcohol into acetic acid and similar organic acids. In the end, it becomes a sour and refreshing drink. Commercial kombucha drinks are available in many flavors, such as raspberry, ginger, lemon, and passionfruit. It is low in sugar and has many health benefits, according to proponents.

The proponents of kombucha say consuming it can give you several health benefits. The drink is made with a live culture of yeast and healthy bacteria. This brings you the same benefit as taking probiotics. The fermentation process leads to the creation of organic acids and they help eliminate harmful pathogens. Besides, the tea base contains polyphenols like catechins, known for robust antioxidant properties. These help in reducing the impact of carcinogenic compounds in the body.

What the studies say

So kombucha does contain bioactive components that may have a beneficial impact on human health. Studies regarding the drink’s claimed benefits have mostly been executed on animals. However, extensive human studies should still be carried out to support the health claims.

Dr. Michael Conlon, a CSIRO senior research scientist says: “The health potential of probiotics more generally can vary depending on the number and type of microbes, what you consume them with, and the composition of your own gut microflora. It’s likely the number of microbes in kombucha would be much lower than what you might see in a commercial probiotic product.” (Choice)

Those looking for beverages with reduced sugar amounts can try kombucha. While the base tea does contain sugar, it is consumed in the fermentation process by the yeast. Not every type of kombucha sold in the market has the same amount of sugar. However, on average, it does contain a lower amount of sugar compared to soda and other carbonated drinks.

Those who have never tried drinking kombucha may be concerned about the alcohol content in it. The truth is, it does contain alcohol owing to the fermentation process. However, alcohol exists only in trace amounts. This is not enough to make one feel intoxicated as such. While it is low in alcohol, the beverage has a slightly acidic flavor and complements foods of varying types.

That said, there have been a few instances of companies that produce commercial kombucha faring poorly in keeping the alcohol content within permissible limits. As a result, Whole Foods Market, a top U.S. grocery chain, recalled all its products on its shelves in 2010, including those made by brand leader GT’s Kombucha. More recently, Buchi, an Australian producer, also had to recall its products owing to high alcohol levels.

There are so many brands of kombucha and variants aplenty too. It would be wise to inspect the labels before buying the drink. Not all variants are pasteurized. If they are not, then they should be refrigerated. Refrigeration stops any more fermentation while retaining the health benefits. You also need to check for added sweetening agents. While the health claims are yet to be ascertained, drinking kombucha in moderation should be okay for most people.