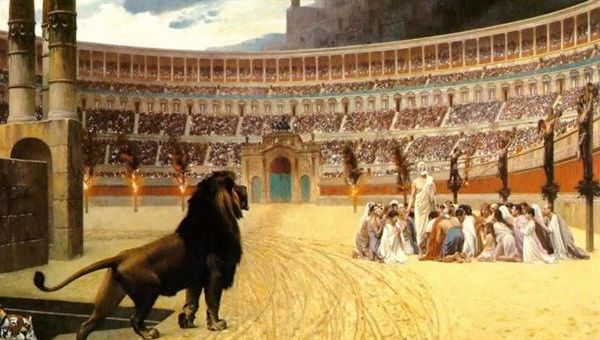 The imperial Romans gloated over the slaying of Christian martyrs. (Image: Public Domain via Flickr)

It is truly amazing that International Time, historic eras, and events are often referenced and referred to as Anno Domini, or A.D. for short. Anno Domini is Latin for “in the year of Our Lord.” This refers to the Christian era.

Suffering from a severe disability or incurable disease is usually considered to be a great misfortune in one’s life. Added to that, the burden of crippling conditions becomes heavier seeing that others are healthy and full of vitality, while they are tortured by the pain and hardly wish to live.

People often complain about why God and life seem to be so unfair. People wonder why their misfortune came about. There are many reasons. Research indicates that karma plays a very important role in both good fortune and misfortune.

In her book Many Mansions, Dr. Gina Cerminara cited cases where Edgar Cayce, the most famous modern American prophet, used his “interpretation” and analysis of a patient’s previous lifetime to diagnose and treat their condition. Edgar Cayce had the special ability of “tele-diagnosing” patients from thousands of miles away under hypnosis.

The ancient Romans gloated over the slaying of Christian martyrs

In Cayce’s interpretations, he found that there were many cases of disability in this world that could be traced back to the ancient Roman era. In their previous lives, the protagonists of these cases directly or indirectly participated in the persecution of Christians during that time.

One case study was that of a 45-year-old woman. When she was 36 years old, she became paralyzed by polio and was unable to walk. She had to rely on a wheelchair to move around. After trying various treatment methods, she asked Cayce to do a past life interpretation for her.

Following the interpretation, she learned that the cause of her paralysis in this life was due to the sins she committed in ancient Rome. In A.D. 37-68, when the Roman tyrant Nero was frantically persecuting Christians, she was a member of the royal family. Instead of showing sympathy for the persecuted Christians in the arena, she laughed loudly. The price for such heartless ridicule was paralysis in this life.

The protagonist in another case was a girl. She was a noble in the Nero dynasty in a previous life. She often enjoyed watching the persecution of Christians in the arena. She especially laughed out loud when she was watching a girl’s body being torn apart by a lion. This aristocrat who took pleasure in the suffering of the martyrs repaid her karma with the pain of hip tuberculosis in this life.

The third case study was that of a film producer. He contracted polio when he was 17 and had a mild limp. The interpretation of his past life also involved the persecution of Christianity in the Roman period.

He was a soldier at the time and was sent to suppress Christians. The Christians were peaceful and did not put up any resistance. He created karma not because he obeyed orders as a soldier, but for mocking those who held steadfast in their beliefs. The disability he suffered in this lifetime was to help awaken his heart and realize the damage he had caused.

The fourth case study was that of a boy. At the age of 16, his spine was injured in a car accident. He lost sensation completely from the fifth vertebrae and was unable to move. He could only rely on a wheelchair.

Seven and a half years later, when he was 23 years old, his mother asked Cayce to do a life interpretation for him. Tracing the reincarnations of his previous two lives, Cayce in one of those lives discovered that he was a Roman soldier in the early days of Christianity. He was an arrogant man, and was directly involved in the persecution of Christians. Therefore, he has to endure painful torment in this life.

The interpretations of the previous lifetimes of these suffering people have revealed the root cause of their conditions: They laughed, gloated over, and persecuted those kindly, peaceful people who bravely held fast to death for their belief in God.

At the same time, life interpretation shows that behind the apparent cause of disease, there seems to be a deeper and unknown cause, and there is an invisible force controlling the destiny of people.

This also confirms the ancient Chinese motto of the millennium: “Good has its reward and evil has its recompense.” Although the protagonists in the first two cases did not directly participate in the persecution, they did not distinguish between good and evil.

In this life, they had to pay the painful price for their ignorance and ruthless behavior in their previous life. Those who directly joined in the persecution, especially the fourth case where the protagonist suffered such excruciating pain that he preferred to die rather than to live, since he was young at the time this happened.

To avoid misfortune and Divine retribution in the causal loop, you must be on your guard and keep the laws of karma in mind. There is a lesson herein for all those tyrants continuing to persecute the faithful even today.