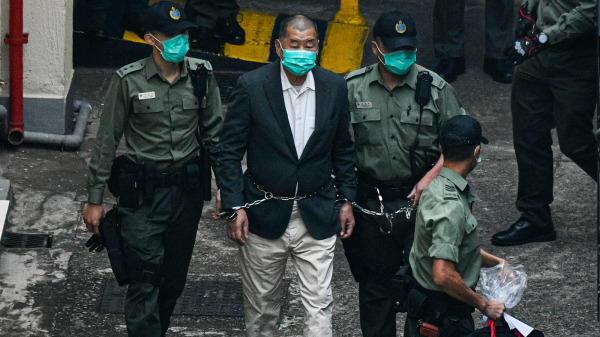 Nine Hong Kong veteran pro-democracy activists and lawmakers, including the founder of Next Media, Zhiying Jimmy Lai, were sentenced to prison for their participation in pro-democracy protests in August 2019. (Image: via secretechina.com)

On April 16, nine Hong Kong veteran pro-democracy activists and lawmakers, including the founder of Next Media Lai Zhiying, also known as Jimmy Lai, have been sentenced to prison terms ranging from 8 to 18 months for their participation in pro-democracy protests in August 2019.

Jimmy Lai, who has been in jail since last December after being arrested and denied bail for his National Security Law charge, was sentenced to 12 months in prison for this charge of participating in pro-democracy protests.

This sentencing of Jimmy Lai is only the beginning

That is only the beginning: He has yet to be tried for seven additional charges of which the national security charge is the most serious. This means that Jimmy Lai, now 73 years old, could face life and die in prison.

A few days ago, the BBC broadcast an interview done with Jimmy Lai a few hours before he was arrested by Hong Kong police. When he was asked whether he is afraid of being arrested, especially when parting with his family, Jimmy Lai, who has always been tough, burst into tears and said: “I do have fear.”  Tough guys also have unspeakable fear, but to pursue democracy and justice, he chose to overcome fear and would not give in to intimidation.

Jimmy Lai is a media tycoon and a billionaire in Hong Kong. He is unlike other wealthy people and has been one of the prominent critics of the Chinese Communist Party (CCP).

Why he embarked on the road of democracy

Lai Zhiying was born into a wealthy family in Guangzhou. His family lost their wealth after the CCP took power. According to unofficial sources, he has six siblings. At the age of 7, his family members were scattered. His father left for Hong Kong, and two older sisters and brothers were still in middle school and university and were transferred to different places so they rarely got home. His mother was sent for rehabilitation by the CCP.

He, his twin sister, and another slightly mentally retarded sister were left behind to fend for themselves although neighbors did render some assistance occasionally. In the beginning, they turned to collecting scraps and when they had no money, they had to go hungry.

When he was 9 years old, he started working at the Guangdong railway station, carrying bags for passengers. He escaped from mainland China at the age of 12 to find ways to earn money. He sailed to Hong Kong hidden in the bottom of a boat as a stowaway.

Like many famous tycoons in Hong Kong, he started from scratch as a child laborer in a garment factory upon his arrival in Hong Kong and then rose to become a billionaire today.

After coming to Hong Kong, he started to learn English on his own. At the age of 25, he started his own business after making some profit from his investments in the Hong Kong stock market.

In 1989, everything changed for Jimmy Lai

The CCP sent armed troops accompanied by tanks to Tiananmen Square to crush and kill the students of the democracy movement. From this June 4 incident, he became an advocate for democracy and bravely criticized the CCP through his publication Next Magazine. He soon became a “thorn in the side” of the CCP.

At that time, the CCP threatened to close all his Giordano chain stores in mainland China. Jimmy Lai was left with no choice but to sell his clothing business and later venture into media by founding Next Media, the most influential media company in Hong Kong.

He once mentioned that the June 4 incident had a profound impact on him: “no June 4th incident, there would be no Next Magazine and no Apple Daily.”

Just as the local media in Hong Kong were increasingly fearful of the CCP, Jimmy Lai has been a persistent critic of the CCP’s violation of human rights through his publications and writing. He has been seen as a hero by many Hong Kong people, but to the CCP, he has been viewed as a “traitor” who threatens national security.

Jimmy Lai has been the target of hostile attacks and disturbances. His home was firebombed several times and his media headquarters was also not spared. However, none of these could deter him from speaking out. He continued to actively participate in pro-democracy protests in Hong Kong and was arrested several times by Hong Kong police during the anti-extradition movement.

Last year in 2020, just as all the countries were struggling to fight the coronavirus and when the Hong Kong people were unprepared, the CCP implemented Hong Kong’s version of the National Security Law.

The implementation of this law came as a death knell for Hong Kong. Jimmy Lai was worried that Hong Kong would become as corrupt as mainland China. With the rule of law being eroded, Hong Kong’s economic credibility as the world’s second-freest economy and its status as a global financial center would be completely destroyed.

In the face of political suppression by the CCP, Jimmy Lai resolutely chose to stay behind in Hong Kong. He told the BBC: “He had only one dollar when he came to Hong Kong and everything that he has accumulated, including a warm family and supportive family members, all come from Hong Kong.” He believes that now is the time to repay Hong Kong and it is time for redemption.

To his supporters, Jimmy Lai is a brave man who took great risks to defend the freedom of Hong Kong. After his arrest, someone left a post on Twitter:

“I respect Mr. Lai very much. He is very courageous and one of the few wealthy people who will not betray his principles of life.”

Jimmy Lai is also known for being a truthful person. During the anti-extradition movement in 2019, he urged the then-President of the United States, Donald Trump, to help Hong Kong and said that Trump is the only one who could help to save Hong Kong.

On April 16, many Hong Kong people who supported Jimmy Lai and the other eight pro-democracy activists embraced each other and wept.  Recently, Hong Kong officials and Beijing’s mouthpiece repeatedly criticized the pro-democracy newspaper Apple Daily under Next Media. Ta Kung Pao, the CCP-controlled newspaper in mainland China, even published commentary articles advocating a ban on Apple Daily to plug the loopholes in national security.

On the other hand, there are commentators who believe Jimmy Lai and Apple Daily represent Hong Kong’s past glory and today’s decline under Chinese Communist Party rule. This is a tragedy for Hong Kong and a warning to the world.