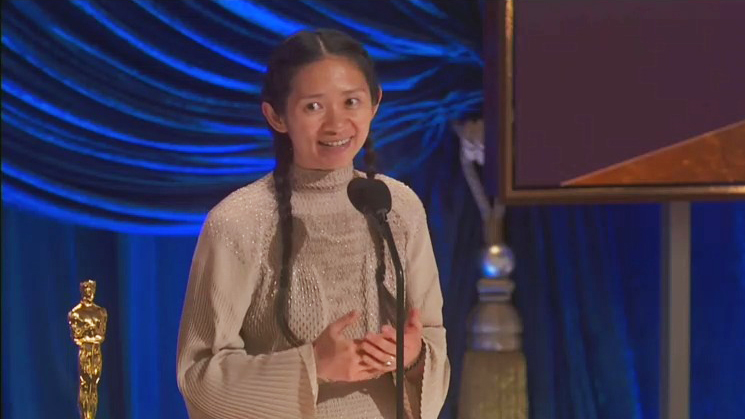 While the world celebrated China-born director Chloé Zhao’s historic three Oscar wins for Nomadland, including best picture, best director, and best actress at the 93rd Academy Awards on April 25, China’s censors were busy trying to wipe any trace of the wins from the web.

Despite extensive coverage of her historic achievement outside of China, there is no news about the win on China Central Television, the Xinhua News Agency, or the Chinese Communist Party’s People’s Daily.

The Global Times a news site owned by the People’s Daily, posted an op-ed late Monday acknowledging Chloé Zhao’s win, but criticizing Nomadland as “typically American and far from the real-life of the Chinese people.”

Of Zhao, the Global Times wrote: “We hope she can become more and more mature. In an era when the China-US confrontation is intensifying, she can play a mediating role in the two societies and avoid being a friction point. She cannot escape her special label, and she should actively use it.”

Despite the government’s hard-line, Zhao still has her share of supporters within China. As news of her win was shared by unofficial accounts on Weibo, many users left comments congratulating Zhao and criticized the nationalistic attack against her. But censorship soon kicked in, and the posts vanished within hours.

One of the popular posts scrubbed from Weibo was a video of Zhao’s acceptance speech at the ceremony, in which she spoke proudly of her Chinese roots. Zhao said she used to recite classic Chinese poems and texts with her father, and one particular line from the Three Character Classic — “People at birth are inherently good” — had helped her keep going when things got tough.

“Those six letters had such a great impact on me when I was a kid, and I still truly believe them today. Even though sometimes it might seem like the opposite is true, I have always found goodness in the people I met, everywhere I went in the world,” she said.

It’s not the first time Nomadland and its director have been hidden by Chinese media; last month, The Associated Press (AP) reported that China’s censors removed social media posts and other publicity about the movie.

The reason for China’s erasure of Zhao’s wins likely stems from her comments in Western media outlets. She said in a 2013 interview with Filmmaker magazine that China was a “place where there are lies everywhere,” a comment that was later removed from that article, according to the AP, but not before it drew a considerable backlash in China.

The Korea Herald newspaper ran a splash story and picture as the lead in its English-language edition on April 26. The Korea Times did the same and included a Yonhap news agency follow-up story entitled “Korean film industry people shine at Oscars for second year in a row.”

Just days after the Oscar nominations were announced on March 15, reports surfaced that the Chinese Central Government had instructed local media “not to transmit live coverage and to downplay the awards coverage.” The order allegedly came from the propaganda department of the Chinese Communist Party.

In a disappointing turn of events symbolizing the worsening situation over the last year, Hong Kong broadcaster TVB announced it would not air the Oscars for the first time in 50 years. The decision was likely based upon Zhao’s comments as well as the Oscar nomination of Do Not Split in the Best Documentary Feature category, which captures the Hong Kong demonstrations in 2019-2020.

“This has been a very dark period for Hong Kong,” said director Anders Hammer, who braved tear gas, rubber bullets, live rounds, and pepper spray to make the documentary. “More than 50 activists and local politicians were arrested in early January. Two of the politicians you see in our documentary will be put on trial. They are now in prison waiting for the trials to start, but they are risking life imprisonment.”