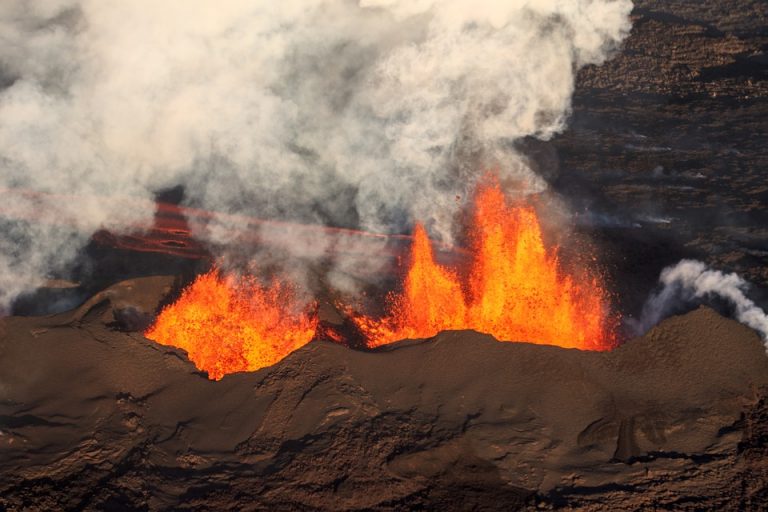 Violent continental collisions and volcanic eruptions are not things normally associated with comfortable conditions for life. However, a new study unveils a large ecosystem of microbes living deep within the earth that is fueled by chemicals produced during these tectonic cataclysms. (Image: via pixabay / CC0 1.0)

Violent continental collisions and volcanic eruptions are not things normally associated with comfortable conditions for life. However, a new study unveils a large ecosystem of microbes living deep within the earth that is fueled by chemicals produced during these tectonic cataclysms. This study involves Associate Professor of Microbiology Karen Lloyd from the University of Tennessee, Knoxville.

When oceanic and continental plates collide, one plate is pushed down, or subducted, into the mantle and the other plate is pushed up and studded with volcanoes. This is the main process by which chemical elements are moved between Earth’s surface and interior and eventually recycled back to the surface. Maarten de Moor, associate professor at the National University of Costa Rica and coauthor of the study, said:

“Subduction zones are fascinating environments — they produce volcanic mountains and serve as portals for carbon moving between the interior and exterior of Earth.”

Normally, this process is thought to occur outside the reach of life because of the extremely high pressures and temperatures involved. Although life almost certainly does not exist at the extreme conditions where Earth’s mantle mixes with the crust to form lava, in recent decades, scientists have learned that microbes extend far deeper into the Earth’s crust than previously thought.

This opens the possibility for discovering previously unknown types of biological interactions occurring with deep plate tectonic processes. An interdisciplinary and international team of scientists has shown that a vast microbial ecosystem primarily eats the carbon, sulfur, and iron chemicals produced during the subduction of the oceanic plate beneath Costa Rica. The team obtained these results by sampling the deep subsurface microbial communities that are brought to the surface in natural hot springs, in work funded by the Deep Carbon Observatory and the Alfred P. Sloan Foundation.

Microbes sequester a large amount of carbon produced during subduction

The team found that this microbial ecosystem sequesters a large amount of carbon produced during subduction that would otherwise escape to the atmosphere. The process results in an estimated decrease of up to 22 percent in the amount of carbon being transported to the mantle. Peter Barry, an assistant scientist at the Woods Hole Oceanographic Institution and a co-author of the study, said:

“This work shows that carbon may be siphoned off to feed a large ecosystem that exists largely without input from the sun’s energy. This means that biology might affect carbon fluxes in and out of the earth’s mantle, which forces scientists to change how they think about the deep carbon cycle over geologic time scales.”

The team found that these microbes — called chemolithoautotrophs — sequester so much carbon because of their unique diet, which allows them to make energy without sunlight. Lloyd, a co-corresponding author of the study, said:

“Chemolithoautotrophs are microbes that use chemical energy to build their bodies. So they’re like trees, but instead of using sunlight they use chemicals. These microbes use chemicals from the subduction zone to form the base of an ecosystem that is large and filled with diverse primary and secondary producers. It’s like a vast forest, but underground.”

This new study suggests that the known qualitative relationship between geology and biology may have significant quantitative implications for our understanding of how carbon has changed through deep time. Donato Giovannelli, a professor at the University of Naples Federico II and co-corresponding author of the study, concluded:

“We already know of many ways in which biology has influenced the habitability of our planet, leading to the rise in atmospheric oxygen, for example. Now our ongoing work is revealing another exciting way in which life and our planet coevolved.”

Provided by: University of Tennessee at Knoxville [Note: Materials may be edited for content and length.]