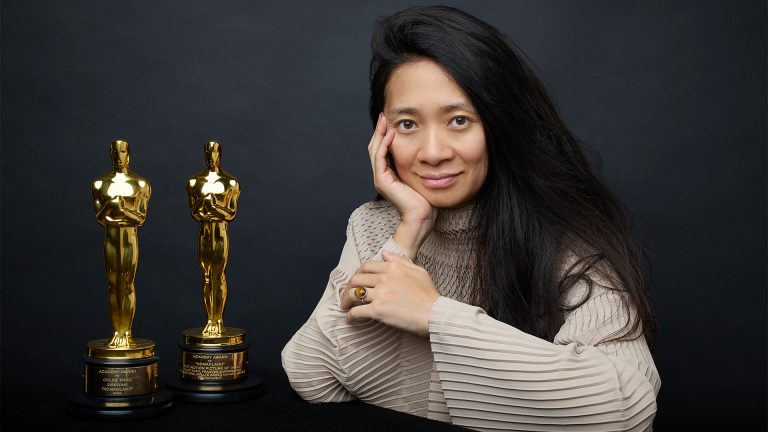 Chloé Zhao, who was born in Beijing, is the first woman of color to receive the best director Oscar. (Image: via Variety)

In a recent interview at an international film festival, Zhao was asked if she’d ever considered telling her childhood story on the big screen. Zhao confessed that she had thought about it, but says she does not yet have the courage to share her story of growing up in China. “It will take several more years,” Zhao said.

Chloé Zhao was born in Beijing in 1982. Her father, Zhao Yuji, is the former general manager of Capital Iron and Steel Company. Her biological mother is a hospital employee, and her step-mother is the famous comedic actress Song Dandan.

At the age of 14, Zhao left China for boarding school in the United Kingdom. She later graduated with a degree in political science from Mount Holyoke College, an elite private college in the United States. Zhao went on to study film production at New York University’s Tisch School of the Arts under the guidance of director Spike Lee.

While Nomadland has been awarded three Oscars, two Gloden Globes, and several other international awards, it has met with opposition in Zhao’s home country of China, where she has quickly gone from being the “Pride of China” to being the “Humiliation of China.” Not only has her award-winning film Nomadland been officially banned in China, but even discussing the film is now frowned upon.

Please watch this Variety interview with Zhao after her historic Oscar wins:

The reason? In an interview with news.com.au last year, Zhao was quoted as saying, “My country is now the United States.” After the comments surfaced recently, they caused quite a stir in China. Zhao was scolded online by the Little Pink, a group of zealous young Chinese Nationalists who strive to guard China against the slightest criticism. The group of internet commentators, who have received praise from the Chinese Communist Party, labeled Zhao a “traitorous female director” for her comment.

Curious Chinese netizens dug up Zhao’s reasons for leaving China in 2013. When questioned at the time by foreign media, Zhao said: “It all began with the place where I grew up, China, which is full of lies.” Zhao went on to say: “The information I have been exposed to since childhood is all fake.” Zhao said she had to leave China to learn the true history of her homeland.

Zhao has since found success as a director in America and has received international acclaim for her work.

Her latest film, Nomadland, based on Jessica Bruder’s book Nomadland: Surviving America in the Twenty-First Century, tells the story of Fern, a 61-year-old widow who finds herself suddenly unemployed after the plant she works at shuts down. With few options in her small town of Empire, Nevada, Fern takes to the road living life in her van as a modern-day nomad.

During an interview with three other nominees for the Oscar for Best Director, Zhao was asked about creating a film about her own childhood growing up in China. Zhao said: “Exploring your own past is a terrifying thing. Telling other people’s stories is easier for me. To have to relive the anxiety of my adolescence [in China]… it will take a few more years. I think, as I become more mature, I won’t be so afraid to examine my past.”

Zhao admires other directors who have had the courage to tell their own stories. After seeing Korean-American director Lee Isaac Chung’s semi-autobiographical film Minari, Zhao had nothing but praise for Chung, saying: “I don’t have that kind of courage. I think you are very brave.”

While Zhao may not yet be ready to tell her own story, she’s staying busy with other work. Her next film, Eternals, a Marvel Comics story about an immortal race of superheroes, is due for release in November 2021.