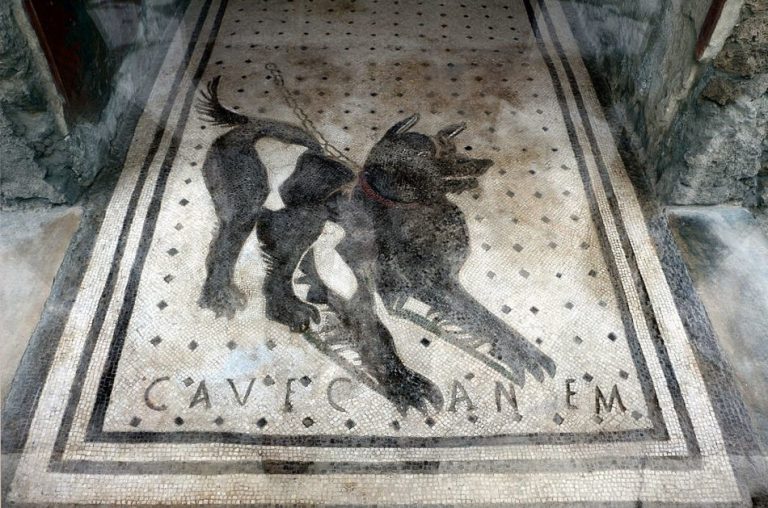 A mosaic depicting a guard dog was discovered at the entrance to the 'House of the Tragic Poet' amidst the ruins of Pompei by archelogist Antonio Bonucci in 1824. (Image: via Wikimedia Commons)

It is quite well known that the ancient Romans were used to living lavish lifestyles. They were great connoisseurs of art too. However, their love of animals as pets is lesser known. If historical artifacts found in the famous city of Pompeii are anything to go by, citizens of the Roman Empire were canine lovers and relied on dogs to guard their homes against thieves and intruders.

Pompeii used to be one of the prominent and flourishing cities in the ancient Roman era. The residents of Pompeii lived life extravagantly, or so say the historians. The artifacts and relics found amidst the ruins of the city also corroborate the view. Pompeians were fond of keeping exotic animals and growing rare plants. They kept cats and dogs at home, while the wealthy even imported peacocks from Eastern countries. However, they liked to keep guard dog breeds for safeguarding their abodes.

Pompeii destroyed by a volcanic eruption

On a fateful Day in A.D. 79, the city of Pompeii was destroyed by a massive volcanic eruption. Mount Vesuvius erupted, killing many inhabitants and destroying their belongings. The ravaged ruins of Pompeii were buried under approximately 30 feet of ash and mud for close to 1,700 years. When excavation began in the 1800s, many interesting and thought-provoking relics were found, including ornaments, utensils, attire, etc. One of the unearthed relics is what historians think is the oldest ever “Beware of dog” sign! The archaeological site has since been visited by many historians and tourists.

A mosaic depicting a fearsome dog was found at the house of a Roman poet in Pompeii. Since its discovery and subsequent restoration, it has become a major tourist attraction. The mosaic is in black-and-white with the words “cave canem” engraved on it. The inscription means “Beware of dog” — a phrase many dog owners use to notify intruders even now. The dog was domesticated as is evident from the mosaic. There is a chain around its neck.

The finding of the guard dog mosaic is of immense historical significance. It reiterates the belief that dogs have always been close companions of humans. From the mosaic, it is evident that the guard dog was not of a docile nature. It does look fearsome. Historians deduce that the ancient Romans were particular about safeguarding their property from intruders and that is why they kept aggressive dog breeds. The exact time of the creation of this mosaic is not known. However, historians are of the view it was made sometime in the 2nd century B.C.

The house where the mosaic was found itself has become a favorite of tourists and scholars visiting the Pompeii ruins. It is famous for the enticing mythological-themed frescoes and pretty mosaic floors. It was found by famous archaeologist Antonio Bonucci in 1824. While the house is not very large, the fact is its frescoes and interior are well preserved. It is hard to say what the fate of the inhabitants of the house was. They could have been killed in the enormous volcanic eruption or they might have been lucky enough to flee the city in time. But the house was somehow protected under the blanket of ash.

When the dog mosaic was found, it was soaked in mud and dirt, which is quite natural. It was restored much like many other relics found at the famous archaeological site. After that, it was put on display under a transparent cover. Pompeii happens to be one of the UNESCO world heritage sites. Scholars and historians believe as restoration progresses and more relics are unearthed, more insights can be gained into the life and culture of the ancient Romans.