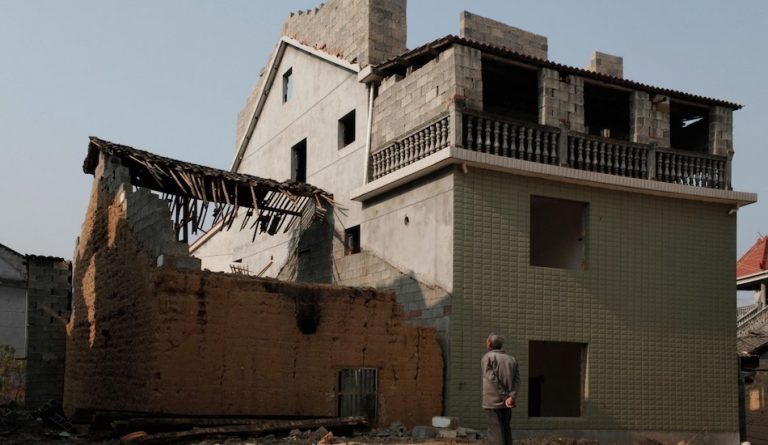 A man from the village requesting a photo of him before his homes are demolished. From the photo series 'Here Live Only Sparrows.' (Image: via Wiktoria Wojciechowska)

Here Live Only Sparrows is a photo series on China’s vanishing villages that is beautifully and quietly observed. It serves as a poignant reminder of the communist government’s destruction of communities. The people whose lives it leaves behind haven’t given up all hope.

Polish photographer and visual artist Wiktoria Wojciechowska took part in an artist residency in Beijing in 2013. During this time, she created a powerful series, Here Live Only Sparrows, which shows demolished houses in a village near Beijing, with the inhabitants forced to relocate so the government could make more room to build factories.

An excerpt from the photographer’s website shares the story of the harsh history that inspired the title, along with a touching story of an encounter with a local from the village.

“In the middle of 1958, Mao Zedong started the “Sparrow War.” He blamed birds for destroying yields and causing famine. All Chinese were obliged to exterminate sparrows, using slingshots, batons, knockers, drums, pots — everything which haunted, made sounds, and did not allow birds to sit. It took 15 minutes for a sparrow to die of exhaustion.”

Hundreds of millions of sparrows were killed, and they came close to extinction. It wasn’t factored in that sparrows ate insects, such as locusts; therefore, locusts no longer had their main predator.

By the following year, the locust populations grew excessively, eating all the crops in sight. This led to grain production in most rural areas collapsing, followed by a massive famine.

The topic of the famine is taboo in China, with any books being written about it becoming banned. It’s a dark part of their history where many people were murdered for food and people began to eat each other, along with accounts of parents who ate their own children to survive.

‘Here Live Only Sparrows’ recalls the human and environmental devastation

Almost 50 years on, Wiktoria Wojciechowska ponders this, and we are left to draw parallels between China’s people and the sparrows. A feeling of extinction within the village, yet a small feeling of hope in the symbol of a sparrow and an old man she encounters, a gentle resilience, as she visits a village almost completely demolished to make room for economic growth.

“While I was passing first buildings, I felt the void, total emptiness and heard only the voice of birds rushing over my head. It was the beginning of February, but the days were very hot. The temperature was up to 30 degrees Celsius. I was surrounded by abandoned buildings without windows, doors, and roofs. Scary, empty eyes of houses, which were vibrant and full of life a few months ago. The shadows were painted on the facades.”

“I crossed next alleys looking into buildings as on Chirico’s images. I was overwhelmed by desolation and mess of scattered stuff: children’s notebooks, backpacks, hats, and pots. On the square in between wreckage of crushed windows, there were cards left by some poker players. I was entering the houses; New Year’s decorations lost their colors; the sun was shining through the breaks of missing tiles, sparrows were bouncing merrily between the batons.”

“I was climbing to higher floors, passing following rooms in the middle of Kafkaesque labyrinth from dreams: narrow streets, slits between houses, outdoor kitchens, bricks, glass, columns, till the top of the building. I was jumping over obstacles without destination. It was so stuffy that my head was spinning…”

“Suddenly someone touched my arm. I turned around and saw an old short man with an honest smile.”

‘What are you doing here?’ he asked.

We sat on the tiny bench, which he had brought from inside.

‘Tao Zhuang will be demolished like other villages. The government needs new places for factories. All people were resettled.’

He poured hot water (kaishui) into a little bowl and gave it to me. Few green tea leaves were floating inside. Drenched in sweat I was listening.

‘I keep an eye on this till the demolition, I am the only man here. Please take a photo of me and my home. These two are mine: the new and the old one.’

“He poured some water in my cup. We were sitting on a wooden bench in the center of a place which will be wiped out from the face of the earth in a moment and we were watching cheerful sparrows making the nest in the building’s slot.”