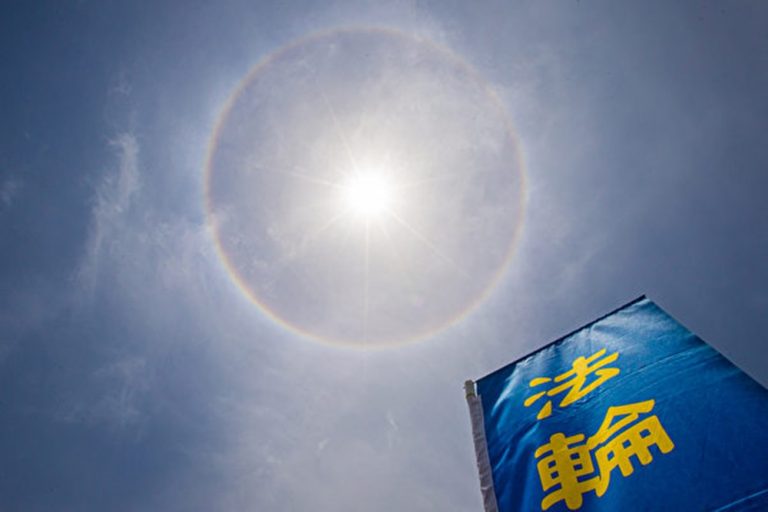 An amazing sun halo with rainbow colors surprisingly appeared in the sky. (Image: via The Epoch Times)

An amazing sun halo with rainbow colors surprisingly appeared in the sky when some 5,200 Falun Gong adherents assembled at the plaza between the National Concert Hall and the National Theater in front of Taipei’s iconic National Chiang Kai-shek Memorial Hall in Taiwan on May 1, 2021.

These Falun Gong followers were there to participate in the image and character formation activities marking the 2021 World Falun Dafa Day and the 70th birth anniversary of Li Hongzhi, founder of Falun Gong.

Please watch the following video of “An Amazing Sun Halo Appeared During a Falun Gong Event in Taiwan.”

The spiritual discipline was introduced to the public in China’s Changchun City by Mr. Li on May 13, 1992. As Li’s birth anniversary also falls on that day, it has been celebrated by Falun Gong adherents and supporters as World Falun Dafa Day since 2000.

Taiwan, however, is not alone in holding Falun Dafa image and character formation activities. It originated in China in the 1990s at a time before this meditative practice was outlawed by the Chinese Communist regime, and similar events have been held in the United States and other countries.

Sun halo appears in the sky

Over the past 20 years, Taiwanese Falun Gong members have organized similar activities annually, but it was the first time to see an amazing sun halo with rainbow colors appearing in the sky during the image and character formation activities.

The highlight of the event was the formation of the magnificent images of two pink peach-shaped steam buns with green leaves, 14 Chinese characters, and two Arabic numerals by about 5,200 Falun Gong members donning clothes in designated colors.

The pink peach-shaped steam buns symbolize wishes for longevity and happiness, while the Chinese characters and the numerals denote the birthday greeting messages and the celebration of the 29th anniversary of the day that Falun Gong was introduced to the public in China.

Above the Chinese characters and the peach-shaped steam buns were two heavenly beauties, which signify good luck and happiness according to traditional Chinese culture.

It took three days for nearly 100 Falun Gong practitioners in the greater Taipei area to stick over 5,000 plastic mats in the designated locations on the ground according to the layout design prior to the event.

The preparation work was in fact a strenuous task, as it was raining on the first two days and sunny on the third day. It took a lot of time and effort to dry the granite bricks on the ground with mops, and then stick the mats on the bricks with tape, piece by piece.

Right after the image and character formation, thousands of the participants stood in lines in the plaza to demonstrate the five sets of peaceful and gentle exercises, including standing meditation, sitting meditation, and another three sets of exercises.

The event was wrapped up with the Falun Dafa Tian Guo Marching Band’s performance at the Memorial’s Liberty Square. They performed about 10 uplifting songs, including Falun Dafa Is Good, The Stars and Stripes Forever, Joy to the World, etc. Their magnificent performance deeply impressed many visitors and a large audience that happened to come out from the National Concert Hall.

Falun Dafa, also known as Falun Gong, is a spiritual practice that is practiced by millions in over 100 countries around the globe. Based on the universal principles of Truthfulness, Compassion, and Tolerance, Falun Gong is rooted in Buddhist tradition and consists of two main components: self-improvement through studying the teachings, and gentle exercises and meditation.

In Taiwan, a group of people started to practice Falun Gong in 1994, two years after this spiritual discipline was introduced to the public in China. Since then, there have been hundreds of thousands of Taiwanese practicing this meditation practice across the country.