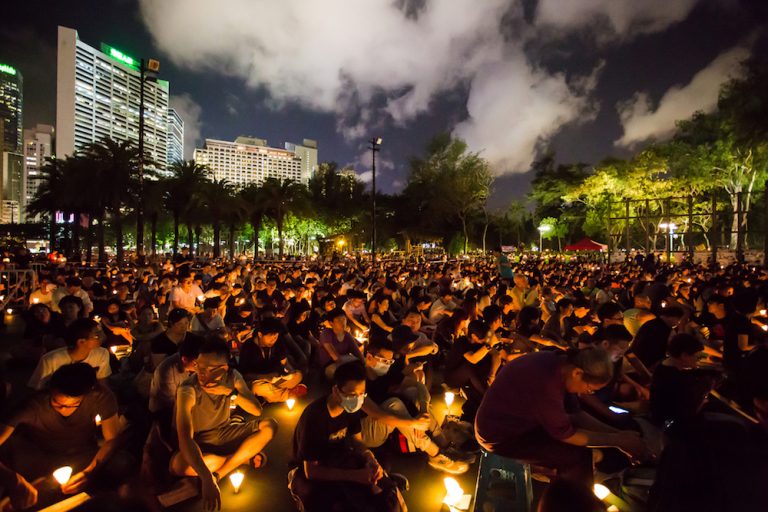 People join a vigil for the Tiananmen Square massacre of 1989 in Hong Kong’s Victoria Park on 4 June, 2015. (Image: Jess Yu via Dreamstime)

Last year, tens of thousands of Hong Kongers publicly commemorated the 1989 Tiananmen Square massacre despite a ban on such efforts by police officials citing health concerns due to the pandemic.

The ban has now caught up with dozens of activists, among them Joshua Wong, who, with several others, was sentenced to jail on May 6 for attending the traditional vigil held in the city’s Victoria Park.

As punishment, Wong was handed a 10-month jail sentence, while three other activists — Lester Shum, Tiffany Yuen, and Jannelle Leung — were given lesser sentences.

“Welcome to the new Hong Kong, where peaceful protest is now a crime,” tweeted Mya Wang, senior researcher on China at Human Rights Watch, after learning of the sentencing.

AP reported that a further 20 people face charges over the vigil.

Wong — who is already serving 13.5 months in prison for partaking in an “unauthorized protest” — is among 49 democracy activists charged under Hong Kong’s national security law that was imposed by Beijing in mid-2020 after a year of massive pro-democracy protests and social unrest.

The law bypassed the local government and was incorporated into Hong Kong’s mini-constitution. Criticized for being overly broad and arbitrarily applied, the law outlaws subversion, secession, foreign interference, and terrorist acts.

The law has created a dread that the city will eventually become as repressed as the mainland, with many Hong Kongers and their supporters fearing it has nullified freedoms meant to be protected under the so-called “one country, two systems.”

“It is increasingly clear that the Chinese government no longer has any regard for Hong Kong’s Basic Law and the right of Hong Kongers to freedom of expression and freedom of assembly,” said Benedict Rogers, the chief executive of UK-based rights group Hong Kong Watch.

Under the “one country, two systems,” Hong Kong had been the only part of China where people were allowed to commemorate the June 4, 1989, Tiananmen Square massacre when People Liberation Army soldiers slaughtered pro-democracy protestors most of whom were students.

Hong Kong had held commemorations for those killed during the crackdown for over 30 years, with the first large vigil being held in 1990, seven years before the city was returned to China from Britain.

With the current situation in Hong Kong, there are fears that the city’s traditional June 4 commemorations will not be allowed to occur again. While this has yet to be said outright by police officials, the city’s pro-Beijing leader Carrie Lam recently said such events need to fall within what the law permits.

“It depends greatly on what is going to happen at the gathering, whether participants fall into offences prohibited by the national security law,” Lam said, reported the South China Morning Post.

Lam said that Hong Kong must respect the country’s constitution.

In mainland China, the Tiananmen Square Massacre and events surrounding it are some of the many events made taboo by the CCP, which this year marks its 100th anniversary on July 1.

The exact number of people killed during the PLA’s crackdown is unknown, but the higher estimates are in the thousands.