God Does Not Tolerate an Evil Heart Full of Wicked Deeds 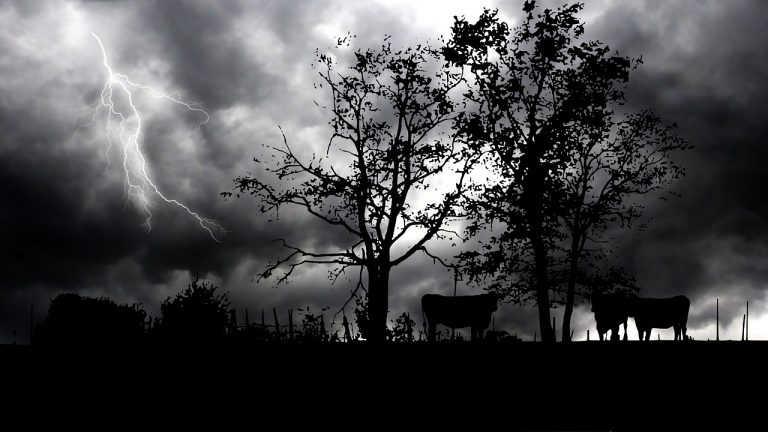 As recorded in ancient texts, the god of thunder is in charge of the 'five' thunders and punishes wicked deeds in order to maintain justice in the world. (Image: RENE RAUSCHENBERGER via Pixabay)

There is a common saying among Chinese people: Those who have an evil heart and do wicked deeds will be punished by “five thunders.” “Five” is related to the ancient Chinese concept of the five elements of the cosmos — metal, wood, water, fire, and earth.

As recorded in ancient texts, the god of thunder is in charge of the “five thunders” and punishes wicked people in order to maintain justice in the world. Real examples of such punishment have been recorded during the periods of all Chinese dynasties. This is a brief extract of cases that occurred in the Qing Dynasty.

In the countryside of Zhenhai County, Zhejiang Province in the Qing Dynasty, four brothers went fishing. When the fishing boat was returning home and about to enter the port, another vessel full of cargo was leaving the port at the same time.

When sailors in the cargo vessel saw the fishing boat heading straight for their boat and to avoid any collision, they shouted to alert the fishing boat to change course to avoid a collision. However, the four brothers refused to give way and ordered their boatman to steer straight ahead. This caused the cargo ship to capsize and sink into the water.

Then, a survivor emerged from the water and clung to the side of the fishing boat to seek help. The boatman panicked and asked the four brothers what to do next. The four brothers felt that if they rescued the man, their arrogance of causing the cargo vessel to sink would be exposed.

Instead of saving the man, they incomprehensively ordered the boatman to chop off the man’s hand that was holding onto the fishing boat. The drowning man still persistently held onto the boat with his other hand. The boatman chopped off the other hand as well. Finally, the man fell into the sea and perished in the water’s current.

Four brothers struck by a thunderbolt

In the sixth lunar month of that year, there was a severe thunderstorm with heavy rain and lightning. The four brothers were all at home. They were hit by a thunderbolt in their own yard and were killed. The boatman was also hit but survived and was able to speak. He disclosed the wicked deeds they had committed. Everyone came to know that their deaths were due to retribution for their evil deeds.

During the reign of Guangxu of the Qing Dynasty, there were two brothers, Shen Da and Shen Er, in Yangshe Village, Jiangsu Province. Both were farmers. Shen Da had two sons and Shen Er had one son. Shen Er’s wife, who was named Yang, was a robust and greedy person with an evil heart. She nagged her husband every day and insisted that he should separate the family property from his brother.

Shen Er finally relented. However, Yang’s greediness went even further.  She thought to herself that if her brother-in-law’s family died, then the fields would all belong to her family and this would be even better!

One day when the brothers were busy in the field, Yang went to her mother and plotted with her to kill her brother-in-law’s whole family of four by putting poison in their meal.

On the night of the 23rd in the fifth lunar month, there was a thunderstorm with heavy rain and lightning that hit the house where Yang lived. Yang’s 4-year-old son shouted that “thunder is coming!” Yang, of course, also heard the loud peals of thunder, but she did not have any scruples and was blinded by her evil heart. She still wanted to carry out her plan to put poison in the freshly cooked rice the next day while her own family would eat the leftovers from the previous day.

When Yang was about to lace the food with the poison, the thunder struck again. Yang’s mother felt scared and told her daughter to stop the crime. However, Yang refused to listen because of her evil heart. She went into the room to get the arsenic.

As she was getting the arsenic, she heard the thunder and before she stepped out of the room, she was hit by a thunderbolt and instantly killed. Yang’s mother was also hit and fell to the ground. After she was lifted up, she could still speak and told everyone of her daughter’s evil plot. Everyone came to understand the cause of Yang’s death.

The day after, Shen Er bought a coffin to bury his wife in the field. That night, the thunderstorm and lightning continued to strike. After dawn, Shen Er found that Yang’s coffin was broken apart and her body was exposed. It could be seen that God could not tolerate Yang’s, vicious heart. Even after death, her wicked deeds were still exposed by God.

Source: epochtimes.com Translated by Chua BC