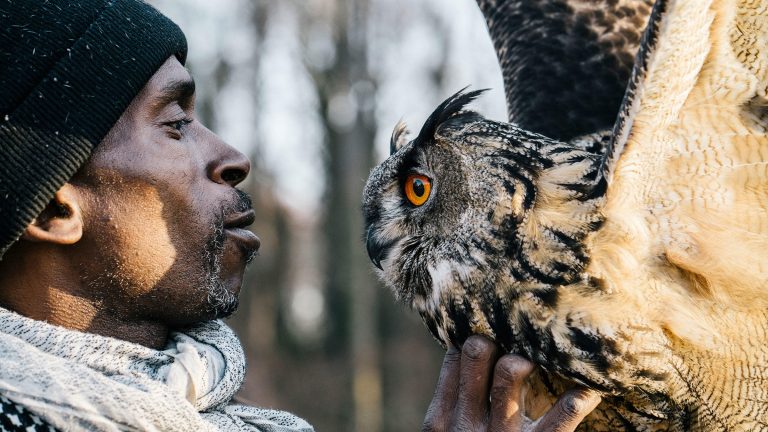 Rodney is a falconer and licensed raptor specialist, as well as a mentor and youth community leader. (Image: rodneysraptors.webs.com )

People find numerous outlets or ways to lead a more meaningful life in unusual things. Rodney Stotts is one such individual who uplifted himself from a life of crime to become a falconry expert and now he shows others how to do the same.

Rodney was a directionless young man in southeast Washington, D.C. in his early 20s. Thus, it was almost unimaginable that he would spend the remainder of his life teaching falconry to others, but that is exactly what he is doing now.

Falconry was an escape from a life of crime

At one point in time, Rodney realized that a life of crime was a dead end and he was drawn to falconry and river conservation as an alternative to jail, or perhaps more likely, death.

Today, Rodney is a falconer and licensed raptor specialist, as well as a mentor and youth community leader. He creates transformative opportunities that connect youth to the environment and community through his non-profit organization called Rodney’s Raptors.

Please watch this video of Rodney’s work with falcons and the local community:

Rodney is a master falconry license holder, just one of about 30 in the entire country, a prestigious title that takes seven years to earn. As a license holder, he is able to capture juvenile birds of prey, including hawks, owls, eagles, and ospreys. In urban areas, young predatory birds often face hostile and dangerous situations from both wildlife and humans. The juvenile preying birds find it hard to survive and are very few like Rodney with the skills necessary to care for the birds.

Falconry was driven by love for the environment and his birds

Rodney’s road to falconry began when he got a job with the Earth Conservation Corps (ECC), which at the time was engaged in cleaning up the Anacostia River. The group’s founder was an ace falconer, which allowed Rodney to developed an interest in the sport. Rodney said on the issue: “I found that my love for the environment and raptors was greater than the love for drug dealing.”

Now, Rodney’s falconry skills allow him to take care of several birds of prey. At his seven-acre Virginia-based farmhouse, he keeps a red-tailed hawk and four Harris hawks. Each falcon has a 512-cubic feet aviary. He also keeps horses at the farm.

“The raptors we have are all non-releasable birds, meaning they can never hunt, so if you look at a young person who’s locked up and [whose] basically future is determined because of a few mistakes that they made early on, you start looking at it like a bird. They’re injured for life, just like the youth, ” said Rodney

Rodney has also set up a website for his falconry program where people can find more information and enroll in a falconry training program. He also employs his birds to engage local youth in environmental education activities. Rodney says: “Falconry can help build character, compassion, and caring. Its importance is immeasurable. It changes lives.”