Game of Thrones Costumes: Are There Hidden Messages? 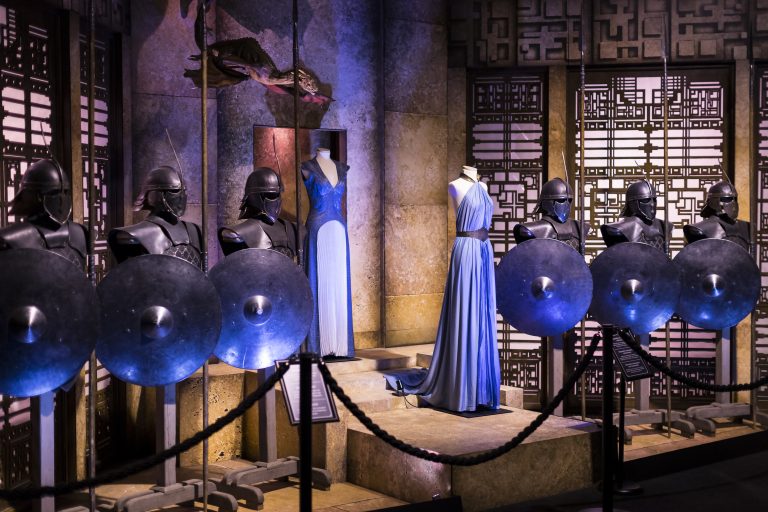 An exhibition of costumes and props from the movie `Game of Thrones` at the Maritime Museum of Barcelona, Spain. (Image: Dreamstime.com © Lestertairpolling)

Game of Thrones is one of the most popular fantasy drama television series, and it has developed a global audience. Shot in various countries, the series has taken its inspiration from various cultural sources.

Anyone who has watched Game of Thrones will definitely have noticed the elaborate costumes adorned by different characters. But have you ever thought that there might be hidden messages in the costumes of the series? There actually has not been much discussion on this topic, as viewers have been mesmerized by the performances and the plot of the series.

The costume designer of the series, Michele Clapton, is a British costume designer. She won an Emmy Award for the costumes in Game of Thrones in 2012. She went on to win again in 2014 and 2016.

Clapton opines that while the show is a fantasy drama, she obtained her inspiration for the various costumes from across the globe. If you look closely, you will observe that costume inspirations have come from the Japanese, Persians, Mongols, and Inuits. Chinese influence in costume design is also quite prominent in the series.

Clapton says that a costume should be designed in such a way that it becomes an integral part of the storytelling. She says: “It’s so easy to draw a pretty dress in a fun way. But this is so much more about finding the right look and telling so much more about that character, and that’s what I really, really enjoy: the storytelling.” Proper clothing adds personality and depth to the various dark, devious, and demented characters in the series.

Check out the details

Through the small screen, it might not always be possible to catch the smallest details on the costumes. But Clapton insists that these small details contribute to the depth of a persona. This is the reason that the designer invests a considerable amount of time and effort into these intricate details even though almost no one notices them. The embroidery done on the dresses depicts the life of a character and reveals how they see themselves, which adds to the production value.

On the clothing of each character, there is a depiction of a “sigil,” or a family crest. For instance, Sansa’s family sigil is a dire wolf, while that of the Lannister family is the lion. Sansa’s wedding in the Lannister family clearly depicts that she has been caught against her will. Also, Daenerys, the dragon queen, has scales on the blue dress that she adorns. Cersei has birds sewn on her costume as she calls her people “my little birds.” The dresses when seen speak much about the character and storyline.

Inspiration from the East

There is a close resemblance to Chinese ideology when it comes to the costume choices of Games of Thrones. This ideology could have foreshadowed the fate of almost all major characters in the series. The use of Hanfu clothing, in particular, Mandarin collars in costumes and horse face skirts, was quite prominent in the show.

The kimono is the most popular historic dress in Japan and many female characters in Game of Thrones are seen to wear kimono-inspired costumes. But there is a twist and whether it is intentional or if it is a mistake is unknown. In the kimono-style dresses in Game of Thrones, the outer layer was folded onto the inner layer to the left. But in normal kimonos, the outer layer is always folded to the right.

When the outer layer is folded to the right it speaks of positive energy and life and when it is done to the left, it signifies negative energy and death. In Game of Thrones, the latter was done. It was seen that most of the characters who adorned such styled costumes eventually faced doom at the end.