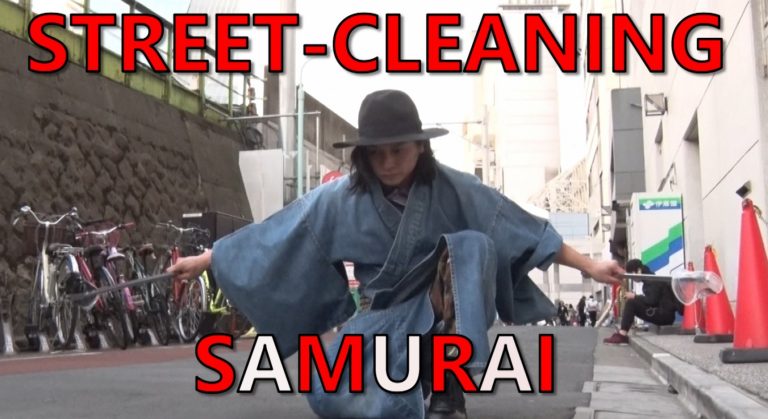 The Japanese samurai have turned their hands and their skills to cleaning up the litter off the streets of Tokyo. (Image: via allabout-japan)

Samurai to the rescue again. Japan has always been an inspiration for the world. Be it their technology or work culture and ethic, the Japanese has always been a benchmark. But littering is an issue that even the strictest country in the world cannot completely eradicate.

Littering is illegal and worthy of being penalized, but that does not stop people from smartly and “accidentally” dropping waste on the streets.

Roaming the streets of a busy but littered neighborhood of Tokyo is a group of samurai. These brave hearts tackle the littering issues as one would deal with a lethal enemy — with absolute and fatal moves.

If you happen to visit Tokyo and are roaming around the Ikebukuro district, you may suddenly come across a kimono-wearing person showing off some cool moves and then picking up a can from the street, so do not fear. That’s one of the litter collecting samurai.

Who are these samurai?

Japan has a tradition of noble military personnel who were known for their inner beauty and deadly fighting skills. While the “breed” of fighters no longer exists, the samurai culture has deeply influenced the present Japanese culture and continues to do so.

Being selfless, brave, and dutiful were the codes that dictated a samurai’s life. These men were also highly educated. A samurai was expected to wield a pen and a sword with equal efficiency. While 19th-century Western influence saw the decline of the samurai tribe and the warriors, the samurai culture prevailed.

Wearing the traditional kimono, carrying an open basket on their backs, and wielding tongs with precision and speed, the modern-day litter-collecting samurais are taking over the streets.

Calling themselves Jidaigumi Basara, these warriors are a part of a street performance group — Issei Ichidai Jidaigumi. These warriors wear a kimono or a robe and show off some cool samurai fighter moves while picking up the trash.

Seeing these moves, any person standing beside litter is sure to get a bit jittery. But the motto of these samurais is not to hate the perpetrator but their vice. These people even put up some small shows.

The motto of these samurais is not to hate the perpetrator but their vice.

Anything trending on Twitter is sure to trend in real life. The trend of mixing two forms to create a new and more effective form has been around for a while. The mixing of cleaning trash and litter from the streets while jogging — known as plogging — started in Sweden.

Joggers follow a specific route and they pick up the stray litter while running their route. They merge self-care with environmental care.

These samurai of Japan took up their ancient culture to not only address the issues of littering, but to also generate awareness among people to consciously and unconsciously stop littering.

And they have incorporated the modern thought process too. While ancient samurai culture was male-dominated, these litter warriors are a group of young men and women doing their bit for their nation.

Often, you can see some epic crossovers happen on the streets of Tokyo. Clean Arrow, inspired by DC’s Green Arrow, joins these samurais, and together they wage a war on the litter of the streets.

People like them are the real superheroes. These young men and women combine performances and litter collection to not only help clean the space they call home, but to also try and awaken the green warrior in others too.

These samurai are an inspiration for the kids of Japan, and others around the world, to stop littering. Learning these basic cleanliness codes from a young age will help give rise to a more environmentally conscious generation. Becoming an inspiration for all, these warriors are volunteers and pledge to keep up the war against littering.