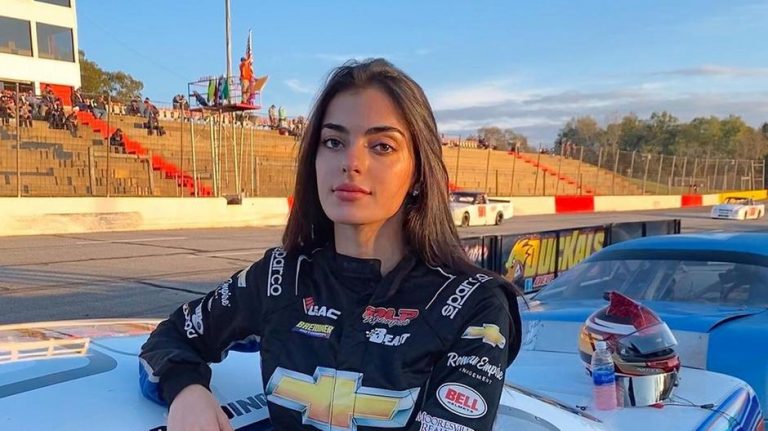 Toni Breidinger made history as she became the first Arab-American female driver to take part in a NASCAR national series at the Daytona International Speedway. (Image: via Facebook)

NASCAR, America’s stock car racing series has seen some tremendous drivers. Being a female driver is a tough job but Toni Breidinger has also made history as she became the first Arab-American female driver to take part in a NASCAR national series at the Daytona International Speedway.

After Toni Breidinger graduated from high school in northern California,  there was only one place she wanted  to be: the little town of Mooresville, NC, aka “Race City, USA.”

Her interest in racing started at age 8 when she raced her twin sister Annie at a go-kart race at the Sonoma Raceway in California. Seeing the sisters’ enthusiasm for auto racing, their father brought them both go-karts.

She started her professional racing career in 2014 with the United States Auto Club (USAC)’s Speed2 Midget Series and became its all-time winningest female with 19 wins when she left the series in 2016.

In 2017, she ran various Late model races throughout the state of California as a teammate to Hailie Deegan.

In March 2019, Toni Breidinger signed with GMS Racing to compete in several late-model events. She also became part of the Drivers Edge Development program that is composed of up-and-coming drivers from both GMS and JR Motorsports.

In 2018, Venturini Motorsports approached Toni to be a part-time driver for the ARCA Menards series.

In 2020, Breidinger competed in Carolina Pro Late Model Series for DLP Motorsports driving the 80 car. She placed 4th in points. In the 8 races in the series, she placed 3 Top 5s and 4 Top 10s.

In 2021, Toni signed with Young’s Motorsports. Before part-timing as a driver for Young’s, Toni took part in the W-series. The series aimed to be an all-female racing series and Toni was a participant. While she made it to the top 50 finalists, her name was later cut off from the program.

In February, she made history as NASCAR’s first Arab-American female driver when she raced in the ARCA Menards Series at the Daytona International Speedway, finishing in 18th place out of 33 — ahead of the two other women who competed. There are about 10 females, and more than 150 men, racing in NASCAR’s various series this year.

Her Lebanese heritage from her mother shines bright as she is passionate about the career she has chosen for herself — to be a race car driver. Her good looks have also helped her land modeling jobs, but her passion remains with race cars.

And while there’s been a lot of attention around her gender, Breidinger is chill.

“At the track, I don’t see myself differently from anyone else. I’m there to go win races, be competitive, and be treated as an equal,” she said. “The car knows no gender, the track knows no gender. It’s not something I’m thinking about. I’m here to do my job.”

Being just 21-years-old, Toni is an inspiration for many women who are trying to break the stereotypes and make history in a male-oriented sports world.

Toni and her sister Annie are American citizens by birth but having Arabic lineage often did subject them to typical stereotypes.

Toni believes that there is no such thing as a gender-oriented driver. She has said that once the helmet is on, it doesn’t matter if you are a guy or a girl. She also hopes that she is not the last female race car driver to make history. She also said that her role model is her mother.

Being a war refugee from Lebanon, Toni’s mother survived, made it to America, and never gave up on her dreams. Stong women often beget stronger women and the same is true for the Briedingers. And not just her mother. Toni’s love for speed was fueled by her father from a very young age and he encouraged them to chase their dreams at full speed.