The Magnificent Turtle Island in Taiwan 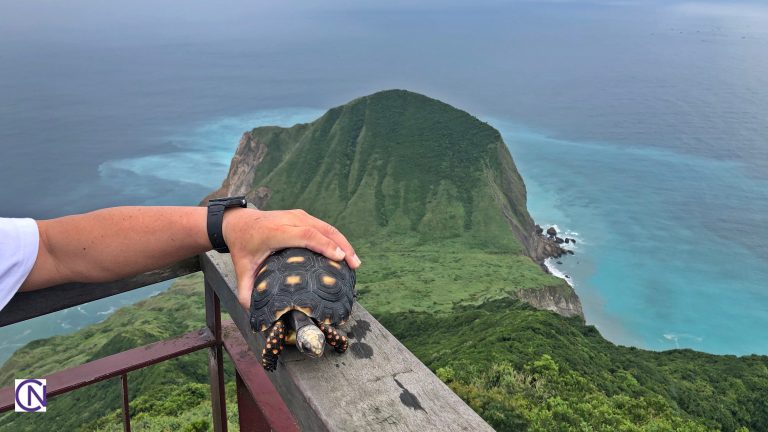 A visitor carried a pet turtle to the top of the highest peak on Turtle Island. (Image: Billy Shyu via Nspirement)

The island is named for the resemblance of its topography to a turtle swimming in the ocean. Covering an area of 2.8 square kilometers (1.1 square miles), Turtle Island is 3.3 km (2.1 miles) long and 1.7 km (1.1 miles) wide. Turtle Island is a landmark of Yilan, and is strikingly visible from most parts of the county.

Turtle Island is the only active volcano in Taiwan, and its last eruption occurred in 1785. The island was settled as early as 1835 by fishermen from China’s Fujian Province during the Qing Dynasty (1644-1911). With an elementary school, the population on the island reached 759 at its peak.

After the Taiwanese government relocated all the 106 households to Yilan County’s Toucheng Township and turned the island into the site of a military base in 1977, Turtle Island was off-limits to visitors for 23 years.

After Taiwan’s martial law was abolished in 1999, the county government created a campaign for making Turtle Island a tourist attraction. It was reopened as a maritime ecological park in 2000. Nevertheless, it is still a controlled military area. The daily limited entry is 1,800 persons, and no visitors are allowed to stay overnight.

With a coastline stretching 8.73 km (5.42 miles), the island can be divided into three parts: the Turtle Head, Turtle Back, and Turtle Tail.

The Turtle Head points toward the southeast. It is a hotspot for viewing the famous “Milk Sea,” a spectacular phenomenon resulting from the combination of the cold seawater and the hot spring water from the seabed.

As the Milk Sea contains rich bacteria that facilitate carbon fixation, it results in a special hydrothermal ecosystem. Additionally, white smoke could be seen emitting from cracks in the volcanic rock under the Turtle Head.

The Turtle Back covers the lion’s share of the island’s land area. There are many cliffs on the southeast side due to wave erosion and earthquakes. But the west side is relatively flat. On the north slope, there are a couple of small streams flowing into the ocean.

The highest peak of Turtle Island is located on the Turtle Back. The peak rises to 398 meters (1,306 ft) above sea level, which is called the “401 Highland” because there is a 3-meter observation deck on the top of the peak.

There is a steep and winding trail leading up to the peak. Visitors need to climb a total of 1,706 concrete steps to reach the top. Though the stairs are well maintained, it is strenuous to walk up to the peak. It usually takes over 1.5 hours to make it to the summit.

Near the Turtle Tail is the only piece of flat land where the visitor center and the only temple on the island are located. Visitors can also see the remains of the abandoned village and elementary school there.

Additionally, there are two brackish lakes with a pair of springs, one cold and the other hot, at the foot of the island’s steep northern slopes.

Along the inner side of the larger lake is a boardwalk leading to the 800-meter (2,625-ft) tunnel bored into the cliff. At the end of the tunnel is a gun emplacement, where visitors can take in the spectacular views of the ocean.

The waters surrounding Turtle Island are also a good place to watch whales and dolphins from March to November each year. A total of 17 species of dolphins and whales can be spotted, including spinner dolphins, common bottlenose dolphins, pygmy sperm whales, false killer whales, etc.

Small as it might be, Turtle Island is an ideal destination for visitors to take in the warmth of the sunlight and stunning natural wonders, as well as explore its rich fauna and flora.