Stargazing Amateur Discovers Greater Universe in His Own Back Garden 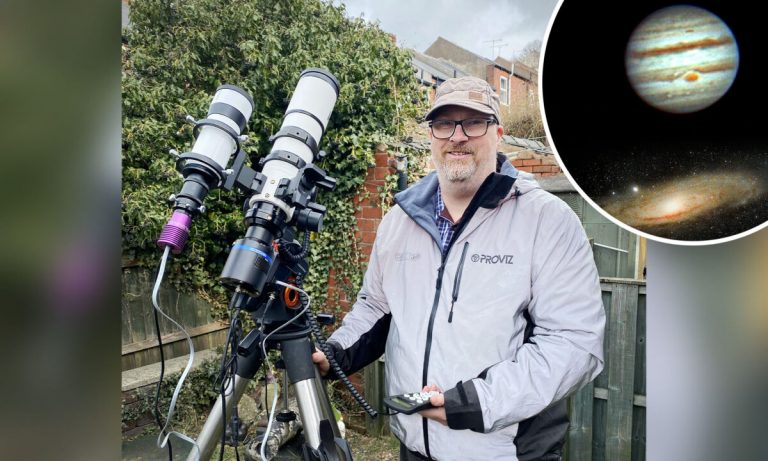 In our tiny ways, we are all astronomers and we all like stargazing. A deeper understanding of the space we Earthlings inhabit has always been the driving force behind all our actions.

The Moon and stars have always fascinated us as children and we spent hours stargazing and connecting the starry dots.

Many of our constellations are an imaginative depiction of the images they paint to the watcher. In a way, these are in the eye of the beholder. But the night sky gradually became a distant dream as pollution took effect, hiding the stars.

Astronomers who use high-end technology and cameras to capture both visible and invisible space are not as awed by the known entities that they regularly come across.

Often they are so engrossed in their hunt for life or information about the beginning of everything that they cannot see the stars closer to home. But a chance encounter by an amateur has reminded us of all of the magnificence that is known as outer space.

Astronomy has always fascinated many people, but Russell Atkin, a retired business analyst, took it up seriously at the age of 52. What started eight years ago as a hobby became a passion for the amateur astronomer. He is the person behind the incredible space photographs that are going viral.

And what is more astonishing is the fact that all the photos were taken from his own back garden in Sheffield. If you are thinking “impossible,” many of his acquaintances are finding it hard to believe as well.

Atkin took up reading books about astronomy and teaching himself about the various constellations. He started taking pictures of the night sky and has traveled the world to take “the perfect shot” of the visible universe.

But the views of the Andromeda Galaxy, the Orion Nebula, and the Pleiades star cluster right from his own back garden have left even him breathless.

The images of space extending back 1,350 light-years are made possible because of the respite nature and the Earth’s atmosphere got during the pandemic lockdown. With a clearer sky to gaze at, taking the pictures he took was not mere luck.

In a way, these stunning images are a link to the past that are being made visible to us just now. Being 1,350 light-years away, the starry lights captured in his pictures can be translated to have come from the time when the Vikings were busy taking over the world.

High-tech telescopes and long exposure cameras have always been the amateur space photographer’s best friends. The same is true for Atkin. He always relied on these two buddies to capture planets and stars, which often made him speechless with awe.

Photographing the Orion Nebula and the Andromeda Galaxy, the Milky Way’s nearest neighbor, are his proudest shots. The Nebula is the nursery of new stars and it is often seen as a fuzzy spot. The best part is that the Orion Nebula is actually the easiest to spot.

The three stars making up Orion’s Belt are the brightest in the night sky and once those are located, you can easily gaze at the nebula. For all the budding astronomers out there, if you are living in the northern hemisphere, capturing the Orion Nebula will be easiest in the wintertime (summer for the antipodes).

For people wanting to look at Andromeda, locate the Cassiopeia constellation. It is shaped like the letter M or W (depending on the perspective of the person), or look for Polaris, the North Star, and you will find Cassiopeia.

Carl Sagan, an astronomer and cosmologist, often admired the Earth and its solitary existence in the vast universe. He was a lover of space exploration, the unknown beyond the known world, and the prospect of life on other worlds.

Maybe we are alone, maybe not, but seeing the beautiful stars and galaxies that exist out there also provides a sense of comfort and belonging.