Secret Message on the Wall: An Inspirational Story 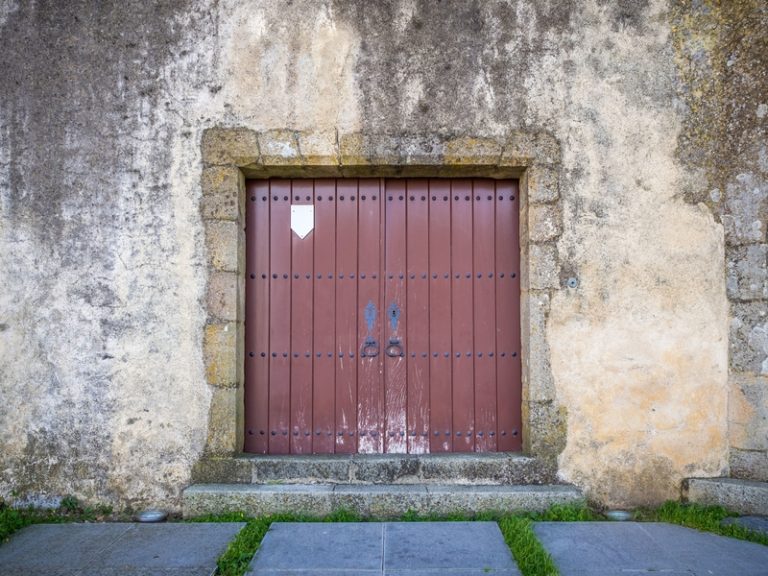 The church was very run down and needed a lot of repair work. Inside, the plaster crumbled off the wall. (Image: via Dreamstime.com © Wirestock)

The newly qualified pastor and his wife were assigned their first ministry. Little did the pastor know that on the wall of the church, he was about to help uncover a startling secret message from WWII.

It was an old run-down church, which had been neglected for many years and had fallen into disrepair. The church needed a lot of work. They set a goal to have everything in reasonable repair in time to have their first service on Christmas Eve.

They worked hard cleaning and scrubbing, repairing pews, plastering walls, painting, and decorating. They were making wonderful progress when a terrible rainstorm hit the city.

When the rain eased up, the pastor’s heart sank when he saw that the roof had leaked and caused a large area of plaster to fall off the front wall of the sanctuary just behind the pulpit. It would be visible for all to see.

There was no time to fix the gaping eyesore before the opening Christmas Eve service the following day. The pastor cleaned up the mess on the floor and with disappointment in his heart, headed home.

On his way home, he noticed that a local community was having a flea market-type sale for charity, so he stopped in to take a look. One of the items he noticed was a beautiful, handmade, brightly colored, ornately stitched tablecloth with exquisite work and beautiful colors.

The thought hit him, and he had a brave idea. It was just the right size to cover up the gaping hole in the front wall of the church. He bought it and hurried back to the church.

By this time, it had started to snow. As he was approaching the church, he noticed an older woman waiting for a bus. He knew there was no bus coming for another 45 minutes and he invited her to wait in the warm church. She was grateful.

The tapestry, which was actually a secret message, fit on the wall perfectly

She sat in a pew while the pastor got out a ladder and some equipment to see if this beautiful tapestry could redeem the gaping hole in the wall. When he finished hanging it up, he could hardly believe how beautiful it looked! And it covered up the entire unsightly area.

Then he noticed the woman walking down the center aisle. Her face was like a sheet. “Reverend!” she asked pointing at the wall. “Where did you get that tapestry?” And without giving him time to answer, she immediately requested that he check the lower right corner to see if the initials EBG were stitched into it there. They were. These were the initials of the woman. She explained in total disbelief how she made this tablecloth 35 years before in Austria.

The woman could hardly believe it as the pastor told her how he had just obtained the tablecloth. The woman explained that before the war, she and her husband lived in Austria. When the Nazis invaded, her husband, for her safety, made her leave Austria. He planned to follow her the following week. He never made it out of the country and was imprisoned within days.

She lost contact with him. She kept searching for him. Sadly, she was informed that he was dead and she never saw her husband or her home again. The pastor wanted to give her the tablecloth, but she made the pastor keep it to decorate the church wall.

She said that she made the tapestry to surprise her husband for his birthday. It had no meaning for her anymore as he was long gone, and it would only make her sad.

The pastor insisted on driving her back home in the snow. That was the least he could do. She lived on the other side of the town and was only on this side of town for an appointment.

The following day, the pastor and his new congregation held a wonderful Christmas Eve service. Many from the neighborhood came out to greet and welcome the new pastor and his lovely wife.

Christmas songs and hymns filled the air, and the pastor’s words of the humble birth of the Christ child and the humble rebirth of their church touched everyone’s hearts.

The Christmas spirit was warm in the hearts of all. At the end of the service, the pastor and his wife thanked each person at the door for attending the service and many confirmed that they would return.

One older man, a man the pastor had hired to do some painting who came to the service at the pastor’s request continued to sit in one of the pews and kept staring up at the front wall. The pastor wondered why he wasn’t leaving.

The man was baffled and asked the pastor where he got the hanging tapestry on the front wall, because it was identical to a tablecloth that his wife had made years ago for his birthday, when they lived in Austria before the war.

“How could there be two so much alike?” he wondered. He told the pastor how when the Nazis invaded, he forced his wife to flee the country for her safety. His plan was to follow her a week later, but he was arrested and put in a camp. He never saw his wife or his home again.

The pastor asked if he would allow him to take him for a brief ride across town, as he tried to figure out how to answer his question about the wall tapestry.

The pastor and his wife drove the man to the same house where he had taken the woman the day before. He helped the man climb the three flights of stairs to the woman’s apartment, knocked on the door, and he saw the greatest Christmas reunion you could ever imagine. It was truly a Christmas miracle.

Note to the readers: This story has taken on many versions—one of which I have edited for you today. The original author of this inspirational story is uncertain. From my own inquiries into the story, I believe that the original author is Reverend Howard Schade.