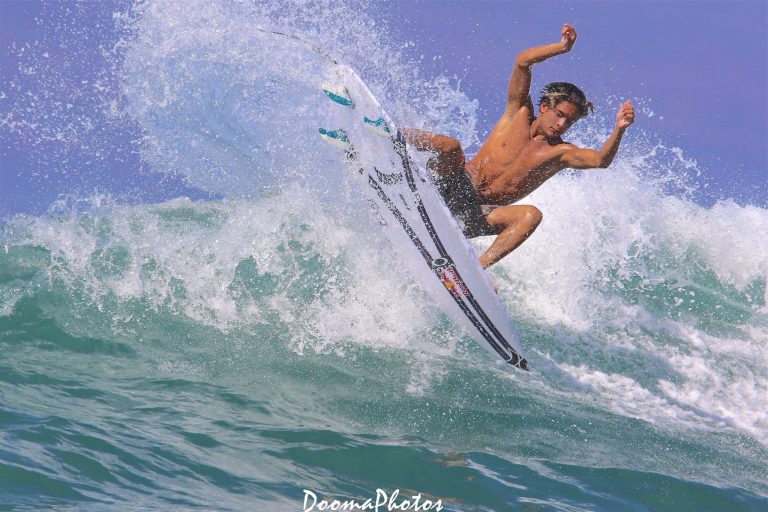 An 18-year-old Hawaiian named Eli Hanneman is taking the world of surfing by storm. (Image: Facebook)

The world of sports is continuously introducing us to young fresh faces. Recently, a 21-year-old woman became the first Arab-American NASCAR driver, and now an 18-year-old named Eli Hanneman is taking the world of surfing by a storm.

Surfing is no easy feat. Being on a plank and tackling strong waves, and riding them without wiping out takes real skills. Many have tried and failed to conquer the waves, but this 18-year-old Maui teen has proven that he truly is a real talent when it comes to riding the waves.

Fast, determined, technically adept, and fearless, Eli Hanneman seems to have the world at his feet when it comes to surfing. As well as impressing plenty of good judges with his free surfing ability, he’s already rubbing shoulders with the senior pros on the World Surf League (WSL) Tour.

Who is Eli Hanneman?

Born in November 2002, Eli stays true to his zodiac sign Scorpio, as Scorpios are known as water children. Hailing from Lahaina on the Hawaiian island of Maui, Eli started skating at 4 years old, and at 5, his father started taking him surfing. By 7, he was really hooked, and he also still tries to skate at least four times a week, even if it’s only for half an hour. Eli has taken part in many major surfing competitions even before he was 18.

While his career as a professional surfer began in 2017, it was four years earlier when Eli’s talents were first noticed. The event was the National Scholastic Surfing Association (NSSA) and the U.S. Prime National Championships, which had a large number of surfers, including Eli. Smaller in size compared to the other contestants, he showed poise and control that few of his age possess. Some of his specialties include driving deep into the rails and technical barrel riding.

“My long-term goal is to be a pro surfer, for sure, but I don’t want to get ahead of myself and focus on winning a World Title,” says Eli, “because if you try to set your goals too high, and just overlook everything going on now, then everything can pass you by and you don’t even realize it.”

There’s an obvious buzz about the young Maui surfer in competitive circles and among his peers, but when it comes to in-depth media coverage or even feature-length edits, Hanneman seems to fly under the radar — a special mix of endless potential without the insatiable hype. He’s spent a solid five years traveling and preparing to be a pro surfer, but he still describes himself as a small-town kid from Lahaina who definitely operates on Hawaiian time.

Earning lofty contracts and earnings running into six figures, Eli has never lost what matters the most — the joy of riding a wave. While the coronavirus pandemic has caused many sports and championships to be put on hold in 2020, Eli worked on a video series entitled Muse. In it, he showed off some extravagant moves, further cementing the fact that he truly is a surfing prodigy. The way he masterfully tackles the airs and the loops come as a surprise given Eli’s age.

Watching the Muse series, you get to know more about the teen and realize that his skills are beyond his years. One quote that stands out is when Eli says: “The more times you put yourself in scary situations, the more comfortable you get. So, I still have a long way to go.”

Apart from being a prodigy of the surfing world, Eli’s down-to-earth persona is what keeps the world hopeful about the next generation.