The Island of Jersey: Does Britain Still Rule the Waves? 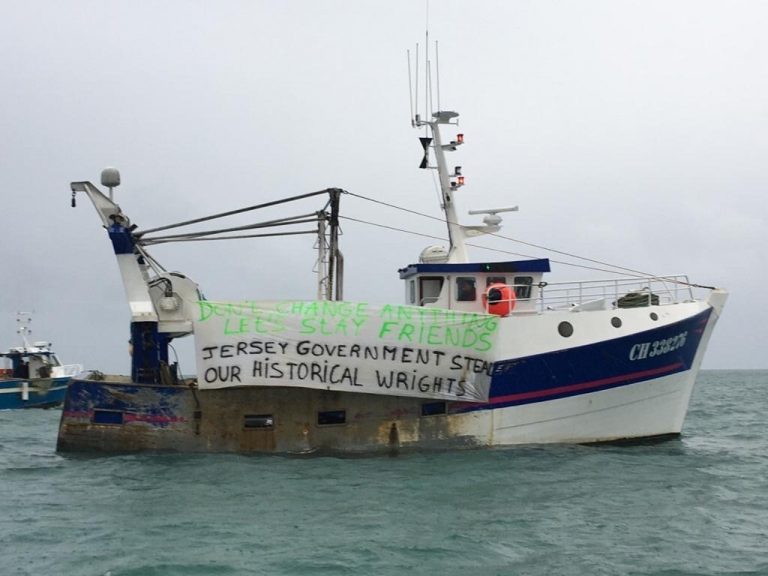 One of the protesting French fishing boats. (Image: via Jersey News)

Brexit has shown what importance is placed on fishing in UK waters as a row erupted in the British Crown Dependency of Jersey on May 5, 2021. Up to 70 French fishing boats made an early morning crossing to blockade the harbor at St. Helier on the UK island of Jersey located just off the coast of France.

The French boats staged a protest at restrictions on their fishing rights and stopped the Commodore Ferry from leaving the main Jersey harbor for several hours. Tempers flared alongside lit flares, Boris Johnson sent in two gunships to observe, while the French sent in two of their patrol boats.

Causes of the Jersey fishing row

It is said that the devil is in the detail, and it appears that the French protest was initiated after Jersey officials implemented license conditions that stopped EU Member State fishing vessels from accessing UK waters until they had the necessary (temporary) licenses issued.

The regulations now give fishing boats the same amount of fishing activity that they did between February 1, 2017, and January 31, 2020. Seventeen French fishing boats were unable to provide that information.

The French minister for maritime affairs, Annick Girardin, then threatened to cut off the electricity supply to Jersey, which is provided by an underwater cable from France. This escalated the local dispute to high stakes levels by stating that France had never agreed to the new post-Brexit arrangements. It also involved the EU, which accused the UK of administrative control measures.

Jersey is, in fact, responsible for its administration, and the disproportionate threat may halt plans to build additional cable infrastructure from France to Jersey.

The confusion over the rules and documentation brought in post-Brexit started with the new border in Kent, where international haulers needed to supply new documents known as the “Kent access permit,” or KAP. Further issues arose over the interpretation of personal imports of certain foods.

This now applies to passengers crossing the Channel. However, Dutch border control at the Hook of Holland ferry terminal told all passengers that since Brexit, they could not bring in sandwiches, fruit, or other items such as cereals in an apparent effort to push back at travelers for the changes to the regulations. Travelers can bring in small amounts of fruits, vegetables, and a few other items. Still, by confiscating everything and then posting videos of the wasted food, it seems a point was being made about the extra work now required.

Leaving the EU has diminished the market for fish from Jersey. The local market is too small to support the number of fishing vessels. The cost of maintaining boats is high; add to that, the retaliatory measures being taken by French ports stopping the Jersey boats from landing their catches and things look pretty challenging for the local fishing industry.

On May 7, the Jersey Express reported that “Jersey fishermen have been banned from landing their catch in Normandy ports,” while the Bailiwick Express @bailiwickxpress tweeted on May 4: “Normandy severs ties with Jersey as fishing row escalates.” The Jersey Evening Post reported that local Jersey fishermen were stopped unofficially and then officially from offloading their shellfish catches, a mainstay export to Europe as La Manche authorities closed the ports of Granville, Barneville-Carteret, and Dielette until further notice.

James Withers, chief executive of Scotland Food and Drink, had previously warned that financial aid packages should be provided to British seafood exporters who were at risk of losing their businesses post-Brexit. With the Lockdown induced by the global pandemic, the hospitality and restaurant businesses have closed, adding further pressure on an already struggling industry.

The days of “Rule Britannia, Britannia rule the Waves” with 19th-century British dominance of the seas may now be lost in the 21st-century dominance of regulations and red tape.