Duke of Burgundy Butterflies: Saved From Extinction by UK Farmers 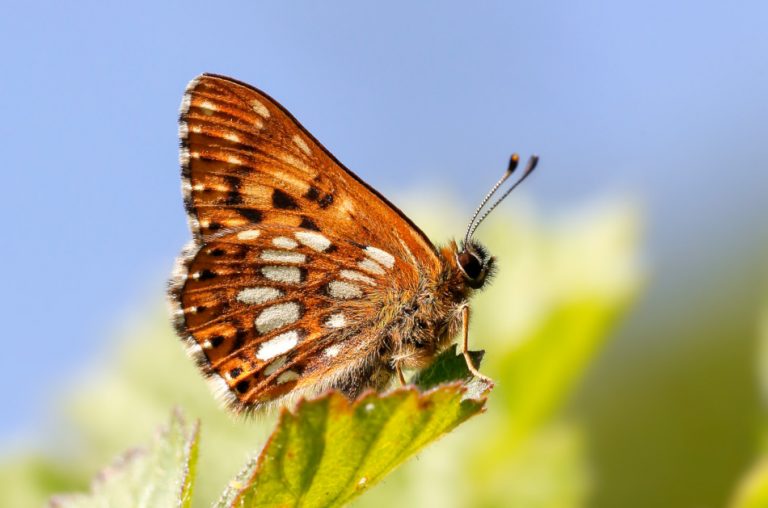 Duke of Burgundy butterflies had become Britain's rarest species after their population declined by 46 percent from 1995-99 and 2004-09. (Image: Charlie Jackson via Flickr)

Why have UK farmers spent time and resources saving the Duke of Burgundy butterflies? Ruskin Bond once said: “And when all the wars are over, a butterfly will still be beautiful.” He captured the essence of the beauty of a butterfly and the hopefulness that the creature represents. For years, butterflies have served as a muse for writers and artists. Take up the works of any author — Haruki Murakami, Ruskin Bond, Antoine de Saint-Exupéry, John Keats, etc. — and you will find some metaphorical representation of butterflies.

Butterflies hold a special place in the minds of people. The metamorphosis that a butterfly undergoes — from a caterpillar to a winged beauty — keeps hope alive in all. Saving butterflies is thus a major concern for many. Studies are being conducted on the feasibility of rearing endangered butterflies in captivity, but until an alternative to natural rearing is found, some people are doing their best to save their local butterfly population. One such miracle story is about the Duke of Burgundy butterflies.

Going back 10 years in time, the rarest butterfly in the UK was the Duke of Burgundy butterfly. The species was named after an aristocrat and was seen, if at all, mostly in the southern Lake District and the North York Moors. When the population of the butterfly fell by 46 percent, the UK’s Butterfly Conservation — the world’s largest insect-centered conservation organization — started coming up with ways to help them recover. Thanks to their efforts, the population of Dukes has seen an increase of 25 percent and new adults are beginning to emerge under the Conservation’s watchful eyes.

The credit goes to the implementation of the Dukes on the Edge Project. Today, not only have Duke of Burgundy butterflies been brought back from the edge of becoming critically endangered, but these creatures have also started recolonizing previously occupied areas.

The methodologies followed were simple:

The program that started in 2011 has aided with the restoration of about 57 acres of habitat area along with providing better management for about 147 sites where the butterflies were already present. The proper and timely conservation and habitat restoration program saved the butterfly from facing extinction.

Author Martin Warren, a butterfly enthusiast, who wrote the book Butterflies: A Natural History, stumbled across the largest Dukes colony. He noted that the region that was previously unoccupied now has a large gathering of the Dukes. The region is in the Dorset organic dairy farm hills. This is a place where the butterflies once lived some 20 years ago!

Having beautiful coloration that aids them with ideal camouflaging, the Duke of Burgundy butterflies have orange spots on their beautiful soft brown wings. These small beings are mainly found in sunny woodland or scrubby grassland. But since they can camouflage themselves, you need to be extremely alert while looking for them. The males are usually lone travelers, except during mating season. The females, along with the caterpillars, prefer staying under the protection of leaves.

While bees are often considered the apex pollinator, butterflies play a vital role in pollination as well. Butterflies also are indicators of healthy ecosystems. Many scientists conduct model research based on butterflies. Fields like embryology, pest control, navigation, and genetics have benefited from the observation of butterflies. Butterflies also serve as an indicator of the number of larger invertebrate species in an area as many of them prey on butterflies.

Aesthetically, butterflies provide a much-needed beautification of the surroundings. Seeing a single butterfly fluttering around in a grey cityscape will surely uplift a person’s mood. Avid butterfly watchers have to be active in order to catch even a passing glimpse of their favorite species. Conservation of butterflies is a way to conserve the ecosystem of the earth. Thanks to organizations like Butterfly Conservation, butterflies are safe.