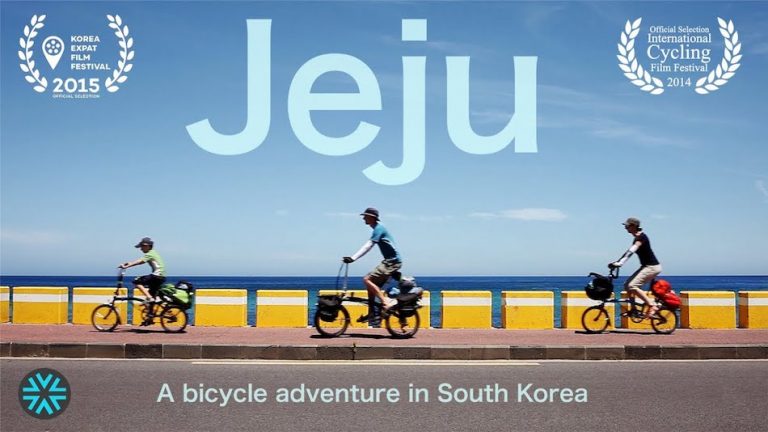 Jeju is a 24-minute travel documentary about one family’s slow travel adventure on a Korean island named Jeju.

It’s a bike-packing adventure, friendly enough for the whole family. Along the way, they meet remarkable people and discover the island’s unique landscapes. The film was featured at the Korean Expat and Indie Film Festival and the International Bicycle Film Festival in Berlin.

Jeju is the film’s title and the name of the volcanic island the adventure takes place on. It is found in the Yellow Sea — just off South Korea. The family journeyed the circumference of the island in 2 weeks with 3 folding Brompton bikes and travel a total of 186 miles (300 km).

Slow travel is an approach where connection to local communities is key. The travel is at an unhurried pace and allows time to breathe and take it all in. You might take the backroads instead of the highways and stop to connect with local life while remaining sustainable for local communities and the environment.

In a world that is often much too busy and fast-paced, it is nice to let that all go for a holiday, break, or adventure and just adopt this gentler pace.

Emma, Jarrod Hall, and their 10-year-old son Sebastian are the family members who take this trip; although we don’t get to learn much about them, we learn about what they experience. We visit the shrinking “gotjawal” rocky forests and journey through breathtaking coastal scenery, but it’s the characters they encounter on Jeju Island that make the film unique.

It’s a simply beautiful film that makes you want to grab your Family, jump on a bike, and slowly explore.

We observe conversations had with locals, we meet a reclusive poet, motorcycle campers, and witness a young couple who are moving away from city life and are building a house on the remote island.

We spend time with an artist who runs a café as the family eats fresh, good, locally sourced food from him, and then drinks fine coffee from a nomadic barista.

Yes — just when you think things can’t get any better they come across good coffee! Here is a small clip from when they encounter Hyundu Kim’s Coffee Truck:

Life on the island is calm and slow-paced, making that special slow travel adventure possible

There is something very special about the island. It appears to attract people with a different outlook on life; it’s as if time has slowed down on the stunning volcanic island.

One of the neat things about this film is that it is made by the family who took the trip. It was co-directed by husband and wife Jarrod and Emma Hall. Emma produced it and Jarrod filmed, recorded sound, and edited the film. The music is by Dion Hall and Kevin Mac Leod at incompetech.com. It was translated by Migyoung Kim 김미경 and the couple’s 10-year-old son Sebastian Hall.

Watch a trailer of the film: Experience the carefree life and the slow travel spirit.

At the start of the film, you hear a local from the island so surprised to hear Sebastian speak Korean to him, and he asks: “How do you speak Korean?” To which Sebastian replies, in a very endearing moment in the film: “I study.”

Experience the joys of “slow travel” by viewing the full film here at Korean Rooftop — it’s well worth a watch.