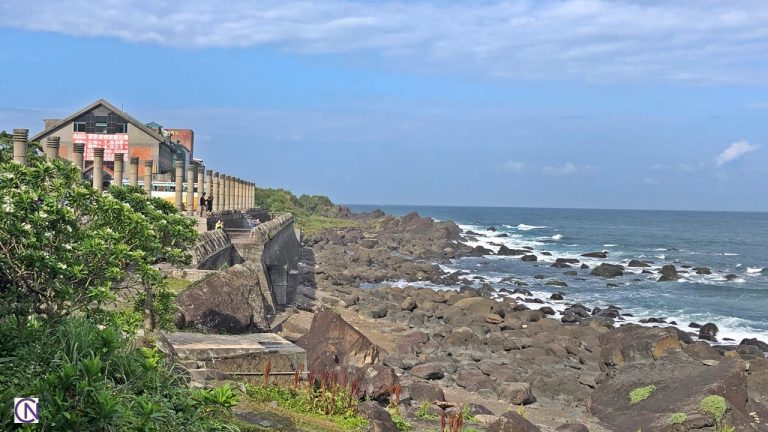 Beiguan Tidal Park used to be one of the Eight Scenic Wonders of Lanyang. (Image: Billy Shyu / Nspirement)

Featuring amazing cuesta and tofu block rock formations, Beiguan Tidal Park is one of the most prominent scenic spots at the southern end of the Northeast Coast National Scenic Area in Taiwan.

Brief history of the scenic park

Beiguan is a gateway to Lanyang Plain. Due to its special geographical location, a checkpoint was built between huge rocks on the flank of the mountain in 1819, during the Jiaqing Regime of the Qing Dynasty (1636-1912).

In the meantime, a garrison was established to prevent pirates and bandits from entering Yilan. Nowadays, there still remain in the park two ancient cannon emplacements facing the ocean. In 1826, a local official picked Beiguan as one of the Eight Scenic Wonders of Lanyang.

Beiguan Tidal Park was historically under the jurisdiction of Yilan County’s Toucheng Township Government. It has been managed by the Northeast Coast National Scenic Area since July 2, 1986.

Beiguan is a terrain situated along a rocky coast. With the force of the Pacific tectonic plate ramming from the southeast, the strata in this area are mostly inclined toward the northwest at an angle of 30 to 40 degrees.

Many rocks along the seashore in the park have a gentle slope on one side, and a steep slope on the other, as they are pounded by waves and blown by the 6-month-long northeast monsoon.

Some rocks were carved by two highly developed joint patterns, forming two sets of intersecting cracks at practically right angles to each other. With further weathering, this cracked surface formed a pattern of squares, which really resemble slabs of tofu.

Following the footpath, visitors can take in the distinctive cuestas and interesting rock formations, while enjoying the pounding of waves against the rocky shore.

Besides two lookouts, the Guanhai Pavilion is another great spot for visitors to appreciate the natural beauty of the park and the mysterious Turtle Island in the vast Pacific Ocean.

Close to the Guanhai Pavilion is the famous “A Thread of Sky,” or “A Ray of Sky.” It is a fissure in a huge rock practically shrouded by trees and plants. At the bottom, it is wide enough for two people to stand together for photographs, but the higher, the more narrow.