Stunning Simulation of Stars Being Born Is Most Realistic Ever 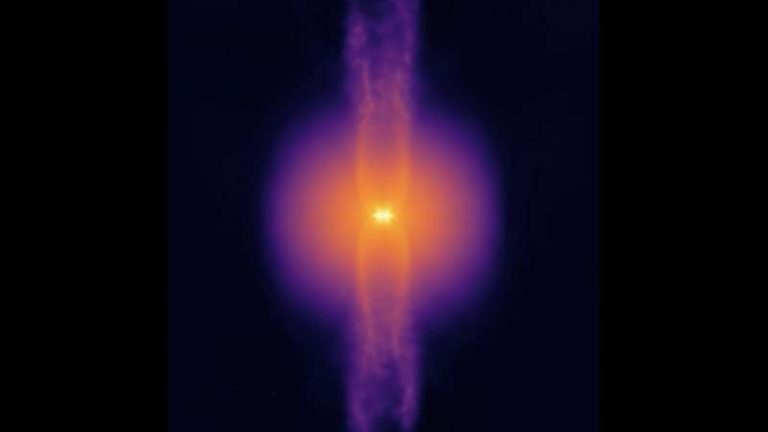 Snapshot from a STARFORGE simulation. A rotating gas core collapses, forming a central star that launches bipolar jets along its poles as it feeds on gas from the surrounding disk. The jets entrain gas away from the core, limiting the amount that the star can ultimately accrete. (Image: via Northwestern University / UT Austin)

A team including Northwestern University astrophysicists has developed the most realistic, highest-resolution 3D simulation of stars being born to date. The result is a visually stunning, mathematically-driven marvel that allows viewers to float around a colorful gas cloud in 3D space while watching twinkling stars emerge.

Called STARFORGE (Star Formation in Gaseous Environments), the computational framework is the first to simulate an entire gas cloud — 100 times more massive than previously possible and full of vibrant colors — where stars are born. It also is the first simulation to simultaneously model stars being born, evolution, and dynamics while accounting for stellar feedback, including jets, radiation, wind, and nearby supernovae activity.

While other simulations have incorporated individual types of stellar feedback, STARFORGE puts them all together to simulate how these various processes interact to affect star formation. Using this beautiful virtual laboratory, the researchers aim to explore longstanding questions, including why star formation is slow and inefficient, what determines a star’s mass and why stars tend to form in clusters.

The researchers have already used STARFORGE to discover that protostellar jets — high-speed streams of gas that accompany star formation — play a vital role in determining a star’s mass. By calculating a star’s exact mass, researchers can then determine its brightness and internal mechanisms as well as make better predictions about its death.

Newly accepted by the Monthly Notices of the Royal Astronomical Society, an advanced copy of the manuscript, detailing the research behind the new model, appeared online today. An accompanying paper, describing how jets influence star formation, was published in the same journal in February 2021, Northwestern’s Michael Grudić, who co-led the work said:

“People have been simulating star formation for a couple decades now, but STARFORGE is a quantum leap in technology. Other models have only been able to simulate a tiny patch of the cloud where stars form — not the entire cloud in high resolution. Without seeing the big picture, we miss a lot of factors that might influence the star’s outcome.”

Northwestern’s Claude-André Faucher-Giguère, a senior author of the study, said:

“How stars form is very much a central question in astrophysics. It’s been a very challenging question to explore because of the range of physical processes involved. This new simulation will help us directly address fundamental questions we could not definitively answer before.”

Grudić is a postdoctoral fellow at Northwestern’s Center for Interdisciplinary Exploration and Research in Astrophysics (CIERA). Faucher-Giguère is an associate professor of physics and astronomy at Northwestern’s Weinberg College of Arts and Sciences and a member of CIERA. Grudić co-led the work with Dávid Guszejnov, a postdoctoral fellow at the University of Texas at Austin.

From start to finish, star formation takes tens of millions of years. So even as astronomers observe the night sky to catch a glimpse of the process, they can only view a brief snapshot. Grudić said:

“When we observe stars forming in any given region, all we see are star formation sites frozen in time. Stars also form in clouds of dust, so they are mostly hidden.”

For astrophysicists to view the full, dynamic process of star formation, they must rely on simulations. To develop STARFORGE, the team incorporated computational code for multiple phenomena in physics, including gas dynamics, magnetic fields, gravity, heating and cooling, and stellar feedback processes. Sometimes taking a full three months to run one simulation, the model requires one of the largest supercomputers in the world, a facility supported by the National Science Foundation and operated by the Texas Advanced Computing Center.

The resulting simulation shows a mass of gas — tens to millions of times the mass of the sun — floating in the galaxy. As the gas cloud evolves, it forms structures that collapse and break into pieces, which eventually form individual stars. Once the stars form, they launch jets of gas outward from both poles, piercing through the surrounding cloud. The process ends when there is no gas left to form any more stars.

“Jets disrupt the inflow of gas toward the star. They essentially blow away gas that would have ended up in the star and increased its mass. People have suspected this might be happening, but, by simulating the entire system, we have a robust understanding of how it works.”

Beyond understanding more about stars, Grudić and Faucher-Giguère believe STARFORGE can help us learn more about the universe and even ourselves. Grudić said:

“Knowing the mass of a star tells us its brightness as well as what kinds of nuclear reactions are happening inside it. With that, we can learn more about the elements that are synthesized in stars, like carbon and oxygen — elements that we are also made of.”

The study, STARFORGE: Toward a comprehensive numerical mode of star cluster formation and feedback, was supported by the National Science Foundation and NASA.

Provided by: Amanda Morris, Northwestern University [Note: Materials may be edited for content and length.]