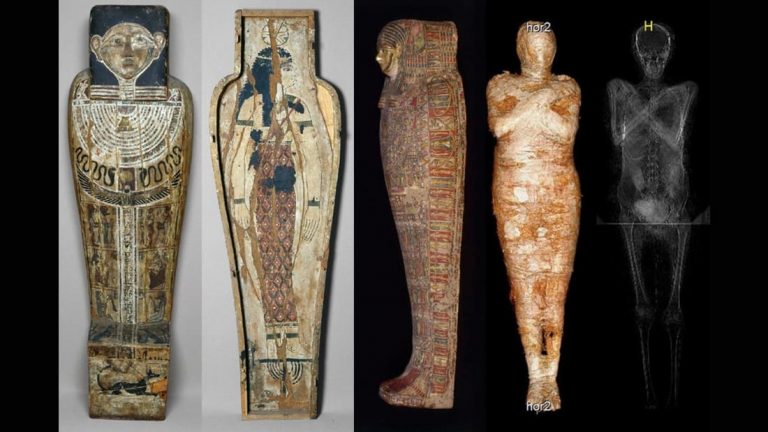 An Egyptian mummy previously believed to be a priest has turned out to be a pregnant mummy. (Image: via Warsaw Mummy Project)

In ancient Egypt, people were particular about preserving the remains of their dead and the tradition of mummification has aroused the curiosity of historians for centuries. Several types of mummies have been discovered over the years, but never a pregnant mummy.

The Egyptians mummified their emperors and their family members, while mummies of people belonging to other segments of society have also been discovered. In a startling discovery, a team of Polish researchers has found a pregnant mummy.

The only known example of a pregnant mummy

At first, archaeologists thought they were scanning the mummy of an ancient Egyptian priest named Hor-Djehuty. Then, in the body’s abdomen, images revealed what appeared to be the bones of a tiny foot.

The woman lived approximately in the 1st century BCE. The Polish researchers were examining a set of 40 mummies at the Warsaw National Museum. In fact, this team had been working on the Warsaw Mummy Project since 2015.

Archaeologist Wojciech Ejsmond, leader of the Warsaw Mummy Project, said: “It [the findings] was absolutely unexpected. Our anthropologist was double-checking the pelvis area of the mummy to establish the sex of the mummy and check everything, and she observed something weird in the pelvis area, some kind of anomaly.”

This anomaly in the mummy’s pelvis region turned out to be the leg of a fetus. The fetus was between 26 and 30 weeks old. According to further analysis, the woman died between the ages of 20 and 30. The study findings were first published in the Journal of Archaeological Science.

The mystery of the pregnant mummy

The discovery of the pregnant mummy stunned historians and Egyptian scholars. They all have agreed this is a first-of-its-kind discovery. While burials of women in pregnant conditions were not uncommon in Egypt, no one had ever uncovered a pregnant mummy. The Polish study team members said now historians may explore new avenues of pregnancy and maternal practices in Egyptian society.

The mummy was from a prosperous family of the Theban community. This was evident from the fact that the body was mummified with care and it was covered in rich amulets and fabrics. While radiology tests revealed some details about the age of the woman and fetus, it was not clear how she died.

The women’s organs were found intact in the abdominal cavity and the fetus had not been removed for some unknown reasons. Typically, the organs are removed and stored separately during the mummification process. It could be because of the religious beliefs of the Egyptians or simply owing to the complications involved in removing the fetus during mummification.

The mummified remains were obtained by the University of Warsaw in 1826. At that time, the coffin and sarcophagus Inscriptions made the experts believe the mummy belonged to a male priest. The mummy was possibly put inside the wrong coffin, which was not uncommon for antiquity dealers in the 19th century.

In 2016, however, computer tomography revealed that the mummy in the sarcophagus may not have actually been a male priest. The bones were too delicate, male reproductive organs were missing, and a 3-dimensional reconstruction revealed breasts. Later analysis revealed the fetus.

As the first-ever discovery of a pregnant embalmed mummy, the mysterious discovery poses fascinating questions about ancient Egyptian spiritual beliefs, the researchers said. Did the ancient Egyptians believe that unborn fetuses could go on to the afterlife, or was this mummy a strange anomaly?

It’s also unclear how she died, but the team believes that further analysis of the mummy’s preserved soft tissues might yield some additional clues.

“High mortality during pregnancy and childbirth in those times is not a secret,” Ejsmond said. “Therefore, we believe that pregnancy could somehow contribute to the death of the young woman.”