After Mao Seized Power in China, It Was Anything but Liberating 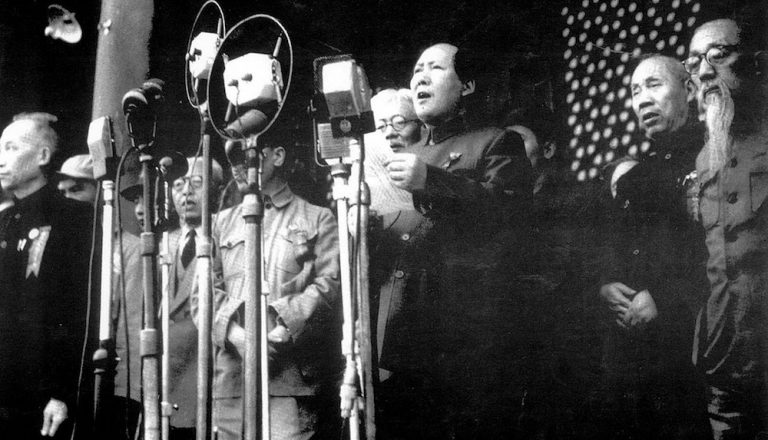 Communist leader Mao Zedong declaring the establishment of the People's Republic of China on October 1, 1949. (Image: Wikipedia via public domain)

In 1949 when the communists and Mao seized power in China, propagandists painted it as an act of liberation and the country’s first steps into modernity. This year, such views are being pushed harder than usual as the Chinese Communist Party (CCP) marks the 100th anniversary of its founding in July.

As part of the anniversary, there will be a “deep reflection of history” including “glorious” large-scale exhibitions, according to state media. Meanwhile, state Internet regulators have been busy deleting “harmful” online discussions about the CCP’s history while calling on the public to report posts that “distort” such history.

The fear for the CCP is that the years following 1949 were essentially anything but liberating as Mao’s regime consolidated its power. The best example of what occurred that I can offer is research done by Dutch historian Frank Dikötter, who found that nearly 2 million people had been killed by their new communist overlords by the end of 1951.

The “liberation” and its following revolution was “first and foremost a history of calculated terror and systematic violence,” Dikötter wrote in his book The Tragedy of Liberation: A History of the Chinese Revolution 1945-1957, which was primarily based on rare access to Party archives.

Dikötter found that in the countryside, communist land reforms that began after “liberation” were accompanied by murder and mayhem and the targeting of so-called landlords.

“Violence was an indispensable feature of land distribution, implicating a majority in the murder of a carefully designated minority,” Dikötter wrote. “Work teams were given quotas of people who had to be denounced, humiliated, beaten, disposed and then killed by the villagers, who were assembled in their hundreds in an atmosphere charged with hatred,” he wrote.

Dikötter said that Mao issued quotas for what he described as the Great Terror, launched in October 1950, which further sought to get rid of the Party’s perceived enemies. Children as young as six were even targeted and killed, he wrote.

In just over a year, it is thought that more than 300,000 people were killed in the Great Terror.

“The party had no compunction in executing innocents, so innocence was no guarantee of survival. The unpredictable nature of the campaign was of course the very basis of terror, as nobody was quite secure in thinking that they were beyond reproach,” Dikötter wrote. “Formerly close communities drifted apart, leaving people isolated and fearful of each other.”

The threat of violence and thought reform drove others to become what the regime called the “New People” of communist society.

After Mao seized power in China, there were many broken promises

In his book, Dikötter pointed out that the communist regime was founded on more than just violence and intimidation. “The history of communism in China is also a history of promises made and promises broken. The communists wanted to woo before they tried to control,” he wrote.

“Like Lenin and the Bolsheviks Mao achieved power by promising every disaffected group what they wanted most: land for the farmers, independence for all minorities, freedom for intellectuals, protection of private property for businessmen, higher living standards for the workers,” he said.

Dikötter explained that one by one, the promises were broken as the communists further established their repressive control over the country and violent campaigns were waged.

Dikötter gave further examples from 1956 when the state took control of all private enterprises and also forced farmers into collectivization programs.

“[Farmers] became bonded laborers at the beck and call of local cadres … Almost everyone was on a starvation diet,” he wrote.

A year later, it was the intellectuals’ turn, with an anti-rightist campaign resulting in a million of them being imprisoned after the so-called Hundred Flowers campaign.

Other groups also targeted included people of faith and ethnic minorities, as was again anyone within Party ranks deemed suspicious. Even leper colonies were swept up and destroyed in the madness. Within a decade from 1949, the communists had sent at least 5 million people to an early grave, Dikötter wrote.

However, worse was yet to come — in 1958, Mao launched his disastrous economic and social campaign called the Great Leap Forward, which would result in mass death. “Over the next four years, tens of millions of people would be worked, starved, or beaten to death in the greatest man-made catastrophe the country had ever seen,” Dikötter wrote in his book, which was a part of his trilogy on the Mao years.

In one of the other trilogy installments, Mao’s Great Famine: The History of China’s Most Devastating Catastrophe, 1958-1962, he estimated that the famine caused 45 million deaths, with up to 2-3 million of them being killed violently during the chaos. This book won the Samuel Johnson Prize in 2011, and its reception brought more attention to this disaster. Dikotter’s other book from the trilogy is Cultural Revolution: A People’s History, 1962-1976. It’s a sure bet these won’t be allowed to be read in China.

Watch this video below featuring a talk given by Dikötter about his book on the famine.