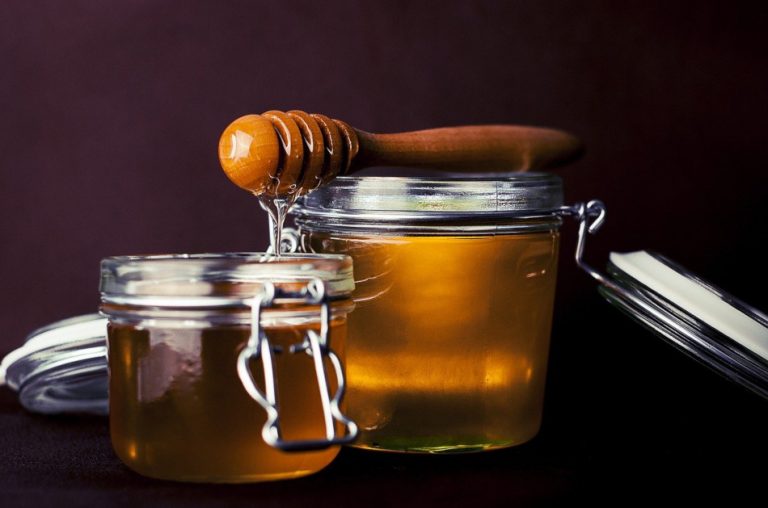 Honey can be used to treat minor cuts and burns, a cough, or sore throat. Honey is soothing, antiseptic, and healing. (Image: fancycrave1 via Pixabay)

In a recent finding that has made researchers concerned, trace radiation caused by the Cold War nuclear tests has been found in U.S. honey produced in certain regions. The nuclear tests were carried out in the 1950s and early 1960s. The scientists examined more than 100 samples of fresh honey created by honeybees in various regions of the eastern United States. They found traces of radiation in 68 samples and the compound detected was radioactive isotope cesium-137. The incident was reported in the journal Nature Communications in March.

The researchers who made the discovery said the radioactive isotope found in the honey samples does not pose a serious health risk to humans. The honey with maximum levels of radioactive compounds was sourced from Florida. The lead author of this study and an environmental geochemist, James Kaste, said “I’m not trying to tell people they shouldn’t eat honey. I feed my kids, honey. I eat more honey now than I did when I started this project.”

While the discovery may seem apparently harmless for humans, it cannot be overlooked. Gizmodo’s George Dvorsky says that during the 1950s, 5 countries, including the former Soviet Union and the U.S. detonated over 500 nuclear weapons. This resulted in a massive amount of radioactive particles in the atmosphere. A majority of the U.S. tests were carried out at the Marshall Islands but some were also executed in places like New Mexico and Nevada. The radioactive particles were carried by atmospheric jet streams far from the point of detonation. Owing to jet stream patterns, the radioactive particles we eventually deposited in the eastern half of the U.S. in enhanced amounts.

The radioactivity pattern was however not only controlled by jet streams. Another key factor was the presence or lack of potassium in the soil of certain regions of the U.S. Plants need potassium for growth and incidentally, potassium and cesium atoms have similar compositions. So plants may sometimes absorb cesium when there is a potassium deficit in the soil. So the researchers found honey with the highest levels of cesium-137 in places with low-potassium soil such as Flordia. Thankfully, due to radioactive decay with a half-life of 30 years, cesium-137 levels in the honey analyzed were low and deemed safe.

While the small amounts of radiation don’t pose a threat to humans, scientists believe that it may affect honey bees. Kaste said that it is not clear if the current honey bee population collapse is being caused in part by the presence of cesium-137 but the possibility remains. The honey bee population faces threats from excessive usage of pesticides and the toxic impact of radiation may be compounding the situation.

Radiation found in honey bigger threat to honeybees than humans

Another concern is the lingering effect of radioactive isotopes on the environment. The fact that the radioactive compound manages to exist in the environment several decades after the occurrence of the nuclear tests is something that cannot be ignored. The compound, cesium-137 is created by the reaction of plutonium and uranium, 2 key compounds used in nuclear weapons.

While cesium-137 is also found in many natural food sources, the amount is minuscule. However, the amount of cesium-137 found in honey procured in certain U.S. regions was found to be higher than average. In fact, Kaste had asked his students to obtain locally sourced foods from areas with the highest levels of cesium-137 to determine if the radioactive contaminants caused by nuclear testing done in the mid-20th century still existed.

The fruits and nuts brought by the students contained very small amounts of radioactive contaminants. When the honey was analyzed, the result was unexpected. Kaste said, “I measured it again because I thought something happened to the container or my detector was bonkers. I reproduced the measurement. And it was, again, 100 times hotter than any of these other foods.”

The finding indicates the atmospheric nuclear tests carried out by the U.S. and other nations in the 1950s have a far-reaching impact on the environment. The radiation toxicity has eroded over the years, but even after several decades, the levels of radiation in these regions were higher than average.