Luca Gentile: The Boy Who Wanted To Fly 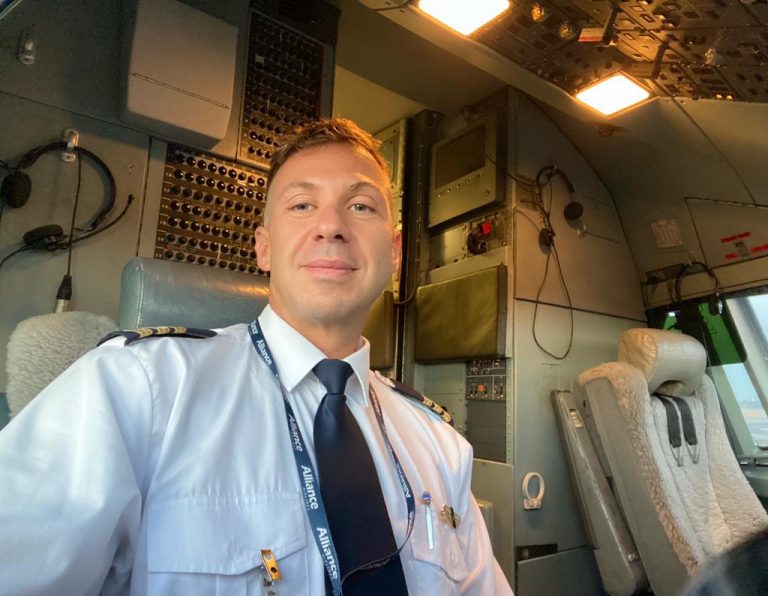 Some children have a clear idea about who they want to be in life. Luca Gentile, born and raised in Rome, Italy, was one of them — and he wanted to fly. From a very early age, Luca knew he was going to be a pilot and travel the world. He recalls that when he was 5, he would proudly wear his uncle’s pilot hat and dream of being one himself.

Luca comes from a family of aviators. His uncle and aunt were both pilots at Alitalia (the Italian national airline), his grandfather was a general in the air force, and his father worked at Alenia, a company that produces satellite and airplane parts. The boy couldn’t help but share the family’s passion for flying and follow his strong inner call.

After completing primary school, Luca’s pathway toward becoming a pilot started with his admission to the national aviation school in Rome, Italy, (one of three official aviation schools in Italy), but it wasn’t smooth sailing (or flying!), as one might think. He got his license and was able to fly at the age of 18, however, job offers for pilots in the country were limited due to the market being saturated. Thus, he had to adjust and become a mechanical engineer until he was accepted into the Navy Academy. There, he met many interesting people and made some good friends. One of them was Nicola, who shared Luca’s dream to be a pilot.

Together, they explored their options and found out that Australia might be the right place for them to achieve their goals. So in 2007, they began their new adventure in the Land Down Under. It took them a while to settle in Melbourne and fill out all the required paperwork, but once that was done, the door to their new journey was fully open.

Luca’s license was verified and accepted, officially granting him permission to fly around Australia. His enthusiasm paid off and he found a job in the Kimberley region of Western Australia, flying tourists and Aboriginal people to their communities in charters and small planes.

In 2009, Luca moved to Port Macquarie, New South Wales, where he worked as a seaplane pilot for 6 months until he decided to upgrade his qualification in order to fly multi-engine aircraft. He then became an air-ambulance pilot in Dubbo, where he lived for 4 years. This was a very significant experience that taught him a lot about technique. Meanwhile, Luca had also found a caring partner who moved from Italy and did not hesitate to leave everything behind and face the unknown just for love. They still share their lives, joys, and of course challenges.

From Dubbo, they moved to Perth, where for two years, Luca was a private jet pilot. This was a big change of setting and an experience that he enjoyed. Transporting celebrities and wealthy clients to dream holiday destinations showed him a different side of life.

Today, Luca still lives in Perth, a city that he loves, and flies for a domestic airline surrounded by friendly colleagues. He has also bought a house with his beloved partner and they have made friends with people of all ages and backgrounds. Luckily, the pandemic did not affect them and their lives, and Luca admits with gratitude that the company he works for “is probably the only company which grew during COVID and bought 30 more aircraft.”

I asked Luca what he liked the most about his job and, without hesitation, he answered: “Over the years, every day has been different. From flying ambulances over the Kimberley to today, I have seen a huge number of amazing places. Now, my destinations are more stable; however, the airline at times accepts charters, for example when there are national sports events, some politicians need to be taken to a particular location, or some emergencies occur. That still creates an element of difference and surprise. During the fires in 2019, we actively contributed to the rescue operations by flying firefighters to the numerous locations they were needed, and being able to help was good.”

When questioned about the most beautiful places he has seen, Luca found it hard to answer. “Australia is a stunning country with many incredible landscapes and environments. I love the Sunshine Coast, from Brisbane to Fraser Island and Noosa, but the Kimberleys is also a unique and spectacular ecosystem. Some photos I took and some of the images I recall are exceptional; the patterns the water draws over the mudflats are unbelievably beautiful. Another mind-blowing destination is the Great Barrier Reef along with the beaches in Western Australia, where one can see, hands down, the best Australian sunsets. Out of this country, Christmas Island, Bali, and Jakarta are just some of the gems I enjoyed visiting over the years.”

Luca feels content and fulfilled as he lives life to the fullest. If he could go back, he would make exactly the same choices. “I based all of my decisions on rigorous planning and logical evaluation, weighing pros and cons, so I am happy with them. My grandad used to say: “Del senno di poi sono piene le fosse’ “meaning that if people could know the future, there would not be as many deaths in wars, so there is no point looking back with regret.”

During his amazing journey, Luca achieved many goals, saw places, met people, and found love, but most of all, he grew personally and professionally. When it comes to his career, he has one more dream: being the pilot on a Boeing 787, perhaps one day, back in Europe.

Luca’s story is that of another inspiring life, filled with adventures and passion, but also with a rational determination, which once again shows the importance of following one’s nature and inner voice.