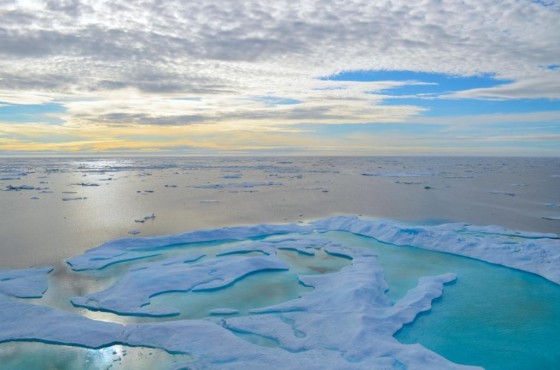 The Arctic is a region of growing geopolitical importance and the involvement of China in the Arctic has turned it into an arena for growing competition. (Image: Lt. Cmdr. Thomas Lowry via U.S. Coast Gaurd)

The Arctic is a region of growing geopolitical importance and China’s Arctic ambitions have turned it into an arena for growing competition.

China’s Arctic ambitions have become increasingly evident over the last few years. In 2018, Beijing announced plans for a “Polar Silk Road” and coined a new term, “near-Arctic state,” applying this label to itself in an apparent move to justify any future claims they may wish to make in the region.

The rest of the world only recognizes Arctic states — the eight countries that have actual territories within the Arctic and who take on the stewardship of the region — and non-Arctic states. Thus, for now, if China’s Arctic ambitions to take advantage of the rich natural resources or new trans-oceanic trade routes in the area are to be realized, it must partner with one of these eight countries: Sweden, Iceland, Norway, Finland, Canada, Denmark, Russia, or the U.S.

Thanks to their mutual opposition to the U.S., China and Russia are getting closer together, which might bolster China’s Arctic ambitions. They are jointly developing energy projects in the Arctic such as the Yamal liquified natural gas (LNG) project. As Russia is still under international sanctions stemming from its military intervention in Crimea after the 2014 Ukrainian revolution, investment from China is a welcome boon.

As long as Russia is keen on developing large energy projects in the Arctic and China is willing to offer funding, Beijing will have some leverage in the relationship. According to a CNBC report, Oksana Antonenko, the director of the consultancy firm Control Risks, said: “China is providing investment, and therefore wants to take a much more significant role in allowing … transportation by the northern sea route.”

However, upon establishing itself as a player in the region, China has been seeking to expand cooperation with other Arctic states, especially Greenland — which falls under Danish sovereign control — and Iceland. According to a CNA report, China’s investments in Greenland and Iceland reached US$2 billion and US$1.2 billion respectively as of 2017. These investments are creating economic dependence on China.

According to the Chinese vision, where deep economic interest lies, military presence follows, as can be seen in Central Asia where China established a military base in Tajikistan. In 2011, a Chinese businessman tried to buy land in the northeastern part of Iceland, claiming he wanted to build a golf course. But Icelandic officials rejected the deal believing that the true intent was to build an airfield or port that would be controlled by China.

The 8 Arctic states established the Arctic Council in 1996 as a forum to promote cooperation and coordination among the nations with sovereignty over the lands within the Arctic Circle on issues such as environmental protection and sustainable development.

China gained observer status to the Arctic Council in 2013. Up until now, it seems the Chinese have been taking great pains to cooperate with the Council’s working groups. Member states should take care, however, because according to a policy brief prepared by the North American and Arctic Defense and Security Network (NAADSN): “It is possible that China’s good behaviour in the Arctic Council is a bid for soft power or a good reputation to aid it later in developing shipping routes or other economic opportunities.”

China seems to be using all the tools at its disposal, attempting to fund the construction of infrastructure, investing in energy and mineral extraction, and trying to influence and change regional governance to increase its influence and become a major player. Faced with this, the Arctic states will need to remain watchful in order to ensure their own interests remain secure in the face of China’s Arctic ambitions.