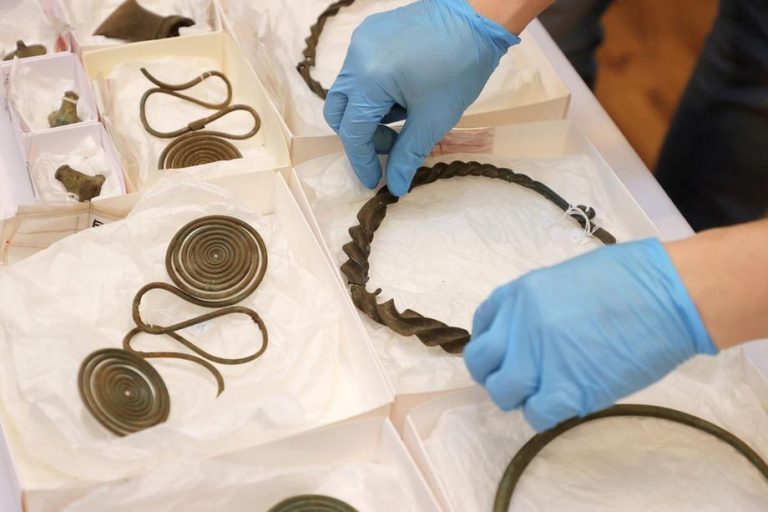 A jewelry piece from the 2,500-year-old treasure trove of Bronze Age items found outside Alingsås, Sweden. Cartographer Tomas Karlsson was exploring the forest terrain when he stumbled upon the treasure. (Image: via County Administrative Board of Västra Götaland)

In Sweden, a hobby cartographer accidentally came across a Bronze Age discovery that is being described as a 2,500-year-old treasure trove. The startling discovery has made headlines and archaeologists are curious, naturally.

The treasure comprises 50 pieces of jewelry and other relics in the set, say the authorities. It is a significant discovery that throws light on Bronze Age ornaments.

The location of the fortuitous discovery is in a forest about 31 miles (50 km) from Alingsås, a town in southwest Sweden. The jewelry set also includes necklaces and clasps dating back to 500 B.C. The cartographer was busy updating a map when he made the spectacular discovery.

The Bronze Age treasure was discovered in the forest beside some rocks. It is assumed that some wild animals dug them up while searching for food. The treasure was found by Tomas Karlsson, who was busy mapping the area for orienteering.

The hobby cartographer initially thought the pieces were nothing more than rubbish. He said in an interview: “It looked like scrap metal. At first, I thought: Is there a lamp there?” On closer inspection, he found the pieces looked great. The pieces looked quite new and that made him think for a while they could be fake. However, he decided to take the pieces to the local authorities for verification and they called in the archaeologists.

The University of Gothenburg’s archaeologist and Professor Johan Ling then led a team of experts and they collected and examined the treasure items carefully. They deployed laser scanning techniques and metal detectors to determine the approximate age of the ornaments.

The university statement says the items were possibly hidden in the forest by members of a wealthy family. It could be owing to a burial or there could be other factors too. The majority of the items found are decorative in nature, like foot rings, bracelets, and necklaces. However, there are items like horse spurs and a rod in the set, things that a woman does not typically wear or need.

Madelene Skogberg, who is a local Cultural Affairs Committee conservator, said: “All the artifacts were essentially intact. For them to be so well preserved is unique, and it is likely they would have remained there unless an animal had decided to build its nest there.”

The archaeologists are of the view that high-society women belonging to the Nordic Bronze Age used such Bronze ornaments to adorn the body. Professor Johan Ling said about the treasure: “Most of the finds are made of bronze and can be attributed to a woman of high standing in society. They have been used to adorn different body parts, such as necklaces, bracelets, and ankle bracelets, but there were also large needles and eyelets used to decorate and hold up different pieces of clothing, probably made of wool.”

Some of these items are in very good condition, and that is why the cartographer thought they were new. The remaining items are a little affected by the ravages of time and weather elements.

The discovery has created a sensation in archaeological circles. The researchers are now busy checking the deposit site. It is possible that there could be some more such ornaments deposited in the area.

The National Museum of Denmark feels during the Bronze Age, bronze and gold metalworking were used a lot. Interestingly, some of the artifacts that were found were not commonly used in Sweden in the bronze era and so the possibility of trading with adjacent nations does exist.

Usually, the ancient tribes stored such items in sites they considered sacred and not in a forest.

Sweden’s National Heritage Board will now determine if Mr. Karlsson is going to be credited for this amazing discovery. If they consider that the cartographer should get the credit, he may be rewarded. Karlsson however said that he is not expecting to be rewarded for the discovery of the antique treasure. He added that the thrill of discovery was satisfying enough.