Sophie Scholl: The Student Who Raised Her Voice Against Hitler and Nazism 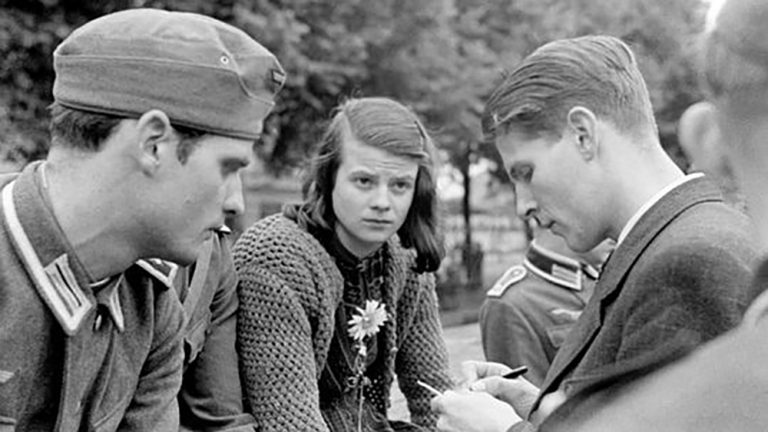 A brave German student named Sophie Scholl dared to oppose the autocratic ways of Adolf Hitler and Nazism despite knowing the outcome. (Image: via Public Domain)

A lot has been written and said about the rise of Hitler in Germany and his dictatorship and passion for dominance that led to WWII. However, not many people are aware of a brave German student named Sophie Scholl who dared to oppose the autocratic ways of Adolf Hitler and Nazism despite knowing the outcome.

In Germany, Sophie Scholl is worshipped as a hero and inspiration for generations to come. Sadly, few outside Germany are aware of her bravery and determination to die for the truth. This year, her 100th birth anniversary was celebrated with fanfare, somewhat curtailed by the ongoing pandemic. Sophie Scholl’s staunch opposition to the infamous dictator cost her life and numerous books and films were made on her life in subsequent years.

Sophie Scholl was born in the town of Forchtenberg in 1921. She, along with her 5 siblings was raised in a Lutheran household. Her father served as the mayor of Forchtenberg. When Sophie stepped into adolescence, initially she believed in the views of the National Socialist Party. She became involved with the League of German Girls. Her father, who was a harsh opponent of Hitler, did not take her enthusiasm lightly. However, as Sophie grew up her faith in the ways of the National Socialist Party started changing. The way her Jewish acquaintances and artists were being treated cast a shadow on her faith in the ideologies of the party.

Sophie with her brother Hans became increasingly critical of the ways of Hitler and his party. When Hitler attacked Poland, they became bitter critics of the ruler, and their faith in the Nazi propaganda was shattered. Sophie’s boyfriend Fritz Hartnagel was among the German soldiers sent for the war. Sophie wrote to him, “I can’t understand how some people continuously risk other people’s lives. I will never understand it and I think it’s terrible. Don’t tell me it’s for the Fatherland.”

Sophie Scholl and friends set up the ‘White Rose’ group

Sophie Scholl enrolled in the Munich University where his sibling Hans was studying medicine. She was studying philosophy and biology. Sophie was a talented student, a good dancer, and played the piano. It was at this time, that she, Hans, and a few like-minded students, decided to raise a voice of protest against Hitler. The “White Rose” group was set up. The group also included a professor named Kurt Huber. The name White Rose was chosen to depict an image of innocence and purity in stark contrast to the evil shadow looming over the country.

Soon after forming the student resistance group, Sophie and her brother started enlightening people about the reality of the Nazi forces. Sophie purchased a typewriter illegally and helped publish some pamphlets for mass distribution. The group started distributing leaflets to educate people to oppose the Nazi regime. They also denounced the slaughtering of the Jewish people. The pamphlets read: “We won’t be silenced. We are your bad conscience; the White Rose won’t leave you in peace.”

It was on February 18, 1943, that Sophie Scholl’s life came to an end. She was throwing pamphlets from the Ludwig Maximilian University’s top floor. It was the 6th pamphlet published by their group. A caretaker saw her and leaked the information to the secret police, the Gestapo. She and Hans were taken into custody and were executed following a show trial. Judge Roland Freisler, notorious for his proximity to Hitler, found both siblings guilty and sentenced them to death. While they did not betray the remaining group members, the Gestapo eventually tracked them down and executed them.

At the tender age of 21, Sophie Scholl was executed. Before going to the guillotine, she exclaimed: “How can we expect righteousness to prevail when there is hardly anyone willing to give himself up individually to a righteous cause? Such a fine, sunny day and I have to go… What does my death matter, if through us, thousands of people are awakened and stirred to action?”

Sophie Scholl’s sacrifice did not go in vain. Her courage is honored in Germany and schools and roads have been named after her. The White Rose, a 1982 German film, was based on the group. An Instagram channel has been dedicated to her memory. Sophie’s life serves as a reminder that opposing injustice, tyranny, and hatred is very important regardless of the outcome.