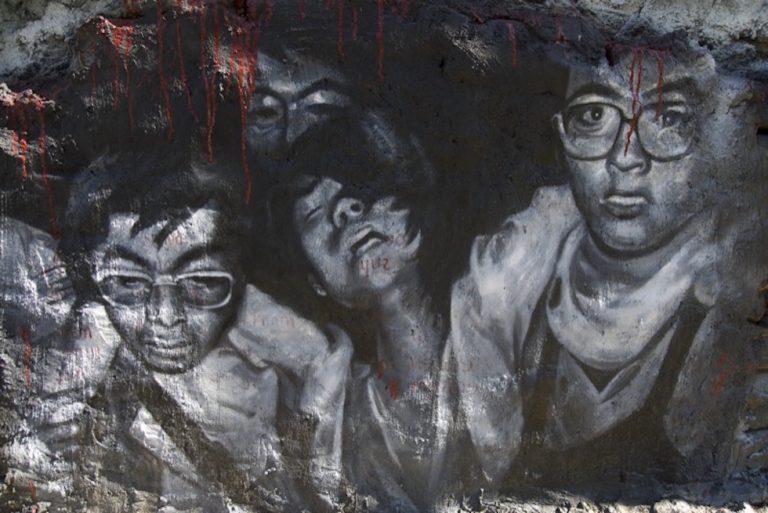 A photo of a painting depicting Chinese prodemocracy protestors during June 4, 1989. (Image: Thierry Ehrmann via flickr / CC BY 2.0)

Julian O’Halloran was a BBC reporter in China covering the events around June 4, 1989, commonly known as the Tiananmen Square Massacre.

O’Halloran was among those foreign journalists who managed to cover the student-led mass pro-democracy protests held in the Square since April that year. The communist regime imposed martial law in late May.

Not long after the brutal crackdown by the People’s Liberation Army (PLA) on June 4, he filed a report for BBC Newsnight from Beijing, which he called Peking, its Romanized name.

“The approach to Tiananmen Square by troops from the west of Peking last night was typical for everything that follows since then and completely contradicts the Chinese government’s claim that its target is a handful of hooligans, criminals and counterrevolutionaries,” O’Halloran said in his report aired on TV.

“As the army units approached the center of the city they were firing into side streets killing and injuring scores of incomprehending and unarmed men, women and children,” he said.

“In a few minutes a city that had been entirely peaceful was being turned not into a battle zone but a killing ground.”

O’Halloran then went on to describe the reaction of the protestors in the square.

“It was only then in fear and anger that the crowd begin to resist, hurling any object they could find at the military hardware and making makeshift and totally inadequate barricades.”

But during the night, O’Halloran saw an armored vehicle become immobilized and turned into the target of infuriated protestors.

“Hatred of the government and a blend of fury and terror were then translated into a dreadful vengeance exacted on one of the tank’s crew as the crowd beat him to death,” he said. “The authorities have reported that several other troops were killed in such incidents and a thousand injured but if these figures are true all of our evidence suggest that this has been only a response by the people of Peking to the extraordinary and murderous onslaught that’s been launched on them.”

Other media reports about what occurred around June 4 likewise describe PLA troops firing into crowds of unarmed people and tanks purposely running over others.

O’Halloran said that shooting around Tiananmen Square and further to the south was constant throughout the night. In the morning, he saw additional armored vehicles move into the square, where he also noted the destroyed remains of the 10-meter-tall “Goddess of Democracy” statue that had been erected there five days earlier.

By 8 a.m., O’Halloran said there were thousands of people in the Avenue of Everlasting Peace, some of whom were enquiring what was going on in the Square.

“Two hours later the situation appeared to have stabilized,” he said and he then described the scene near the Square’s northeast entrance where a thousand or more civilians faced a line of troops 200 yards away.

“As I walked towards that point accompanied by others taking what seemed like a leisurely Sunday morning cycle ride or stroll, the troops without warning opened up again with a burst of rifle fire lasting a minute or more,” he said.

He and the civilians fled down the avenue away from the shooting.

“One man felled by a bullet was carried past me into a nearby building. The luckier injured were put into ambulances whose crews showed exceptional courage,” O’Halloran said. “As troops opened up again in our direction half an hour later, this time with bursts of automatic fire, the injured and dying were loaded onto cycle trailers to be ferried to a hospital half a mile away,” he said. “These scenes were to be repeated for much of the day.”

O’Halloran said that many people had been shot while others had been beaten, clubbed, or stoned by PLA troops.

“As the day progressed it became clear that there had been similar carnage on an equal or great scale in other areas of the city,” he said.

The exact number of people killed during the PLA’s crackdown is unknown, but some estimates are in the thousands. UK documents released in 2017 said that at least 10,000 people had been killed, according to a Chinese source based on a June 5 cable sent by the then-British ambassador to China, reported the BBC.

Beijing was not the only area affected by state violence targeting China’s June 4 pro-democracy protests, with reports coming in from other parts of the country. Time reported that there were 20 sizable pro-democracy protests that had been brutally suppressed. While these incidents are lesser known, the killings around Tiananmen Square shocked the world.

In Hong Kong, mass candlelit vigils were held for 30 years to commemorate the victims. Last year, Hong Kong police cited the coronavirus pandemic for not allowing the vigil, but many turned up anyway. This year, the city’s police have warned that if anyone attends a vigil, they face up to five years in jail, while anyone promoting an event faces a year in jail.

In mainland China, the violent suppression of the 1989 democracy movement was made a taboo topic by the ruling Chinese Communist Party. Due to the state’s suppression of information, there is little public knowledge in China about the Tiananmen Square Massacre or the prior seven-week-plus long protests among the country’s younger generation.

Watch photographer Stuart Franklin talk about how he took the ‘tank man’ photo on June 5, 1989, in the Amnesty International video below.