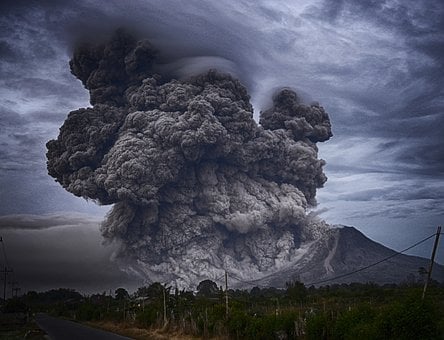 A catastrophic drop in atmospheric ozone levels around the tropics is likely to have contributed to a bottleneck in the human population around 60,000 to 100,000 years ago, an international research team has suggested. (Image: via Pixabay)

A catastrophic drop in atmospheric ozone layer levels around the tropics is likely to have contributed to a bottleneck in the human population around 60,000 to 100,000 years ago, an international research team has suggested. The loss of the ozone layer, triggered by the eruption of the Toba supervolcano located in present-day Indonesia, might solve an evolutionary puzzle that scientists have been debating for decades.

“Toba has long been posited as a cause of the bottleneck, but initial investigations into the climate variables of temperature and precipitation provided no concrete evidence of a devastating effect on humankind.”

“We point out that, in the tropics, near-surface ultraviolet (UV) radiation is the driving evolutionary factor. Climate becomes more relevant in the more volatile regions away from the tropics.”

Destruction of the ozone layer cools the Earth

“The ozone layer prevents high levels of harmful UV radiation reaching the surface. To generate ozone from oxygen in the atmosphere, photons are needed to break the O2 bond. When a volcano releases vast amounts of sulfur dioxide (SO2), the resulting volcanic plume absorbs UV radiation but blocks sunlight. This limits ozone formation, creating an ozone hole and heightening the chances of UV stress.”

The team examined UV radiation levels after the Toba eruption using the ModelE climate model developed by NASA GISS (Goddard Institute for Space Studies). They simulated the possible after-effects of different sizes of eruptions. Running such a model is computationally intensive, and Osipov is grateful for the use of KAUST’s supercomputer, Shaheen II, and associated expertise.

Their model suggests that the Toba SO2 cloud depleted global ozone levels by as much as 50 percent. Furthermore, they found that the effects on ozone are significant, even under relatively small eruption scenarios. The resulting health hazards from higher UV radiation at the surface would have significantly affected human survival rates. Osipov said:

“The UV stress effects could be similar to the aftermath of a nuclear war. For example, crop yields and marine productivity would drop due to UV sterilization effects. Going outside without UV protection would cause eye damage and sunburn in less than 15 minutes. Over time, skin cancers and general DNA damage would have led to population decline.”

Provided by: King Abdullah University of Science and Technology [Note: Materials may be edited for content and length.]