Why Do Hong Kong People Persist in Mourning June 4th, Which Had Nothing to Do With Them? 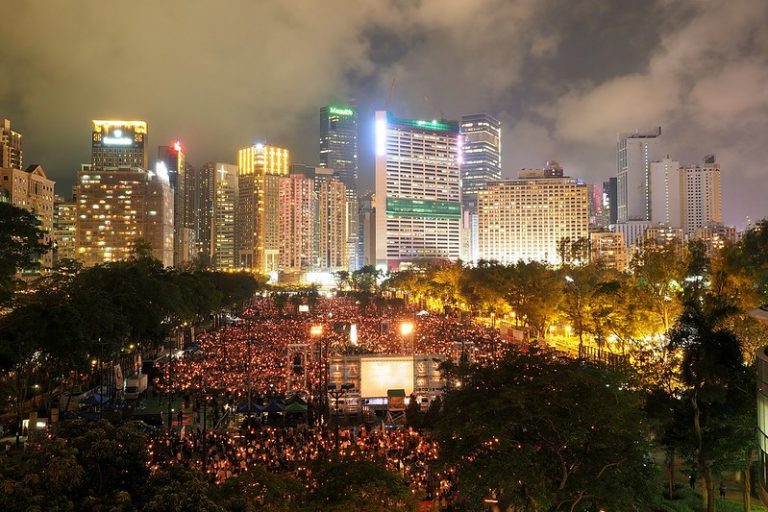 The people of Hong Kong hold a candlelight vigil in memory of all those who perished, their dreams cruelly crushed, and paid the ultimate sacrifice at Tiananmen Square on June 4, 1989. (Image: Garry Knight via Flickr)

Why have Hong Kong people persisted in mourning June 4th for 32 years? Yuan Gongyi, a Hong Kong industrialist, said that the entire human race shares a universal value, and the maintenance of this value makes no distinction between races and national boundaries.

Universal values ​​have no borders or race

“Anyone who harms this value is our enemy, and all those who respect it are our allies, and we must protect each other.”

He continued, saying the Chinese Communist Party (CCP) is now destroying basic human values. “If we only care about ourselves, we will be defeated by the CCP one by one. We are very weak when we face the CCP alone, so we must unite and protect each other. Hong Kong is very small, and it can’t beat the CCP on its own. Without the support of the United States, the European Union and other countries, there is no chance of winning.”

Regarding the June 4th rally, Yuan said that Hong Kong people’s mourning on June 4th has nothing to do with issues such as race or nationality.

“When you see someone fall down on the street, you will step forward to help, regardless of his skin color or nationality. This is the most basic human nature. This is not only a Western value, but also in line with Chinese traditional culture. Helping others is the foundation of happiness.”

He emphasized that if anyone damages this universal value, everyone must unite and confront them. “In fact, this is a question of values ​​and recognition of morality. It has nothing to do with ethnicity. The ethnic group of Hong Kong people is also made up of people from all over China and even from all over the world, including Cantonese, Fujianese, South Asians, as well as British and Americans. As long as they share the same ideas, they are fellow travellers.”

As an international city, Hong Kong’s prosperity and development also rely on the joint efforts of local people and the international community to make modern economic miracles. Yuan said that Hong Kong has also received the support of many people who love freedom from mainland China, those who stayed in Hong Kong before they went to live in the West.

Hong Kong people are not only mourning June 4th, but also others persecuted by the CCP

The people of Hong Kong are not only mourning June 4th and supporting the democratic movement in the mainland, but they also support Xinjiang Uyghurs and Tibetans persecuted by the CCP. At the same time, Hong Kong people also support Taiwan’s fight against CCP infiltration and military harassment. By the same token, they too will also support Hong Kong.

He further pointed out that many parliamentarians in the United States and Europe have spoken out for Hong Kong: “Helping Hong Kong made the CCP sanction them: Why? They maintain this universal value that the CCP opposes.”

Hong Kong and the Mainland are a community of shared destiny

Zou Xingtong, vice chairman of the Hong Kong Alliance in Support of Patriotic Democratic Movements of China, believes that Hong Kong people have persisted in mourning June 4 for more than 30 years as a reflection of their kindness and tenacity and their determination to safeguard justice. He said:

“I have persisted for 32 years for an event that has no direct relationship with me,”

The June 4th rallies in Hong Kong during the past 30 years have been the largest in the world, with tens of thousands or even hundreds of thousands of people attending, attracting attention worldwide. The lighted candles in the hands of each participant merged into a “sea of ​​light,” illuminating the night sky.

When the return of Hong Kong to mainland China was imminent in 1997, many people in Hong Kong were concerned about the situation and wanted to learn more about the Beijing government.

Hong Kong is the only place where June 4 could be publicly mourned in the land of China. This makes Hong Kong different and is why Hong Kong people feel that it is their responsibility to speak out for the mainland pro-democracy activists and those who died on June 4, 1989, at Tiananmen Square.