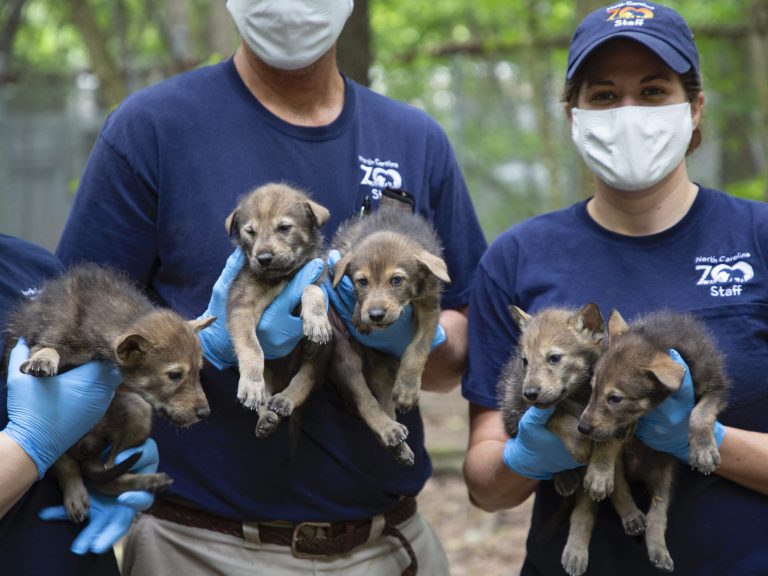 Getting the rare species of animals to breed in captivity can prove to be challenging. However, at the North Carolina Zoo in Asheboro, the birth of a dozen rare red wolf pups has delighted authorities.

The 12 red wolf pups were born in 3 separate litters, all within 3 days. The red wolf breeding program at the zoo is a grand success. The total number of wolves bred under the program stands at 36.

Red wolves are lean canids, often with black-tipped bushy tails. Their coats are mostly a brown or buff color, with some black along their backs. There is sometimes a reddish tint to the fur on their muzzle, behind their ears, and on the backs of their legs. At a glance, a red wolf may look somewhat like the domestic German shepherd.

The red wolf is between the size of a gray wolf and a coyote. They are about four feet long and stand about 26 inches at the shoulder. Red wolves weigh anywhere between 45 and 80 pounds, with males averaging about 60 pounds and females about 50 pounds.

The red wolf is deemed to be a critically endangered species. The loss of natural habitat and indiscriminate instances of poaching over the decades has resulted in the dwindling of their numbers. Around 20-25 red wolves are found in the natural habitat in eastern North Carolina. In captivity, the number of these wolves is below 250 in programs throughout the U.S.

Zoo visitors have to wait to see the red wolf pups

The parents of the newborn red wolf pups are called Flint and Sassy. Two other wolf parents are Denali and Ayita and Solo and Taylor. However, the zoo visitors will have to wait for some time before they can see the wolf pups. The pups are scheduled to show up outside of their dens by the middle of June.

The North Carolina Department of Natural and Cultural Resources Secretary, Reid Wilson, said: “Congratulations to the North Carolina Zoo for playing an essential part in the survival of this critically endangered species. These births are important because many of our wolves, once matured, have been moved to other breeding packs to continue to help bring this species back from near extinction. Our hope is that more and more red wolves can soon be placed into the wild.” The zoo authorities have asked the public to name the newborn red wolf pups and a naming poll will be unveiled soon.

The visitors and locals are quite excited about the development and they can’t wait to see the red wolf pups. The zoo authorities have said all the pups and their mothers are in good health. It is the first time the zoo has witnessed the birth of 12 red wolf pups in one season. Flint and Sassy’s pups, 6 pups in all, were born in the zoo’s public habitat. However, the other 6 pups were born in the non-public viewing zone. The zoo management has plans to move the wolves to the non-public breeding zone after the pups become mature.

The North Carolina Zoo is known for its consistent efforts to preserve the endangered red wolf species. While the number of red wolves is still not significant, it has tasted success in its conservation efforts. Beginning in 1994, the zoo management has bred four dozen red wolves.

Smaller and ruddier in color than their gray wolf cousins, the red wolf is one of the most endangered canids in the world. Though red wolves once ranged across the southeastern United States, years of hunting and habitat loss had driven the species to the brink of extinction by 1970. As part of an ambitious captive-breeding program, the U.S Fish & Wildlife Service captured the 14 remaining red wolves they could find in the wild. These wolves are the ancestors of the animals that now live in North Carolina, the first animals to be successfully reintroduced after being declared extinct in the wild.