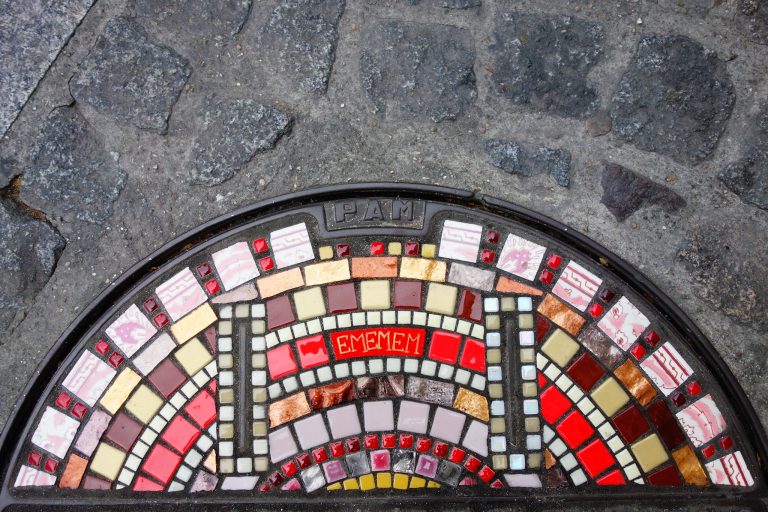 Ememem, the artist, has been given the nickname 'the pavement surgeon.' (Image: Facebook)

A French artist has taken up a unique effort to mend these minor but ugly cracks on pavements and roads. Ememem, the artist, has been given the nickname “the pavement surgeon.”  He makes use of materials such as ceramics to fill up splintered facades and gouged sidewalks with beautiful mosaics. The pristine tiles are laid out in intricate geometric motifs that give the pavements and sidewalks an amazing look.

Where others see only a pothole, a manhole, or a crack, Ememem sees a “canvas” on which to weave his special creations. Whether you use a car, a bicycle, or other means of transport, you often see potholes or cracks in the asphalt. Fortunately, where the public authorities fail to repair these eyesores, Ememem arrives and turns them into works of art.

The French artist has dubbed his technique “flacking” — a play on the french word flaque, meaning puddle. Using materials such as ceramics, wood, and bitumen, he fills everything from tiny cracks to gaping craters in the pavement with his artistic bandaids. His work is now a characteristic token of the cobbled streets and cracked sidewalks of Lyon, but his playful mosaic art can also be found in cities throughout Europe — including Paris, Madrid, Barcelona, and Milan.

Ememem’s street artwork began in his native city of Lyon 10 years ago. He was checking out a damaged alley in the city. The idea of using ceramic tiles to fill up broken pavements and alley joints dawned upon him. Since 2016, the artist has been doing the task consistently and he has received a positive response from city dwellers and fans.

He said in an interview: “It’s a succession of a lot of places and reflections, experiments I did before. I had done similar things, with other techniques, other supports, and finally, when this one emerged, I knew I found something that I was going to keep doing for the rest of my life.”

The artwork created by Ememem serves two purposes. It beautifies the ugly potholes and damaged alley sections into artwork. It also draws the attention of the authorities to the deteriorating road conditions.

The risk of people stumbling upon the holes and uneven road surfaces also gets reduced substantially. Even the tourists exploring the roads of Lyon cannot help but admire the amazing artwork. Over the years, his mosaic artwork has evolved and it has become more creative and intricate.

Ememem makes use of ceramics, bitumen, and wood to beautifully fill the small cracks, asphalt fractures, and gaping craters of varying shapes and sizes. Ememem is happy with the work he is doing. He says: “I’m just a sidewalk poet, a son of bitumen. My work is the story of the city, where cobblestones have been displaced; a truck from the vegetable market tore off a piece of asphalt. Each becomes a flack.”

Ememem is currently working on a project funded by the Societe du Grand Paris, flacking the construction site of the new Grand Paris Express metro. His work will be on display there for free until August 31, 2021. You can also see his work at an exhibition at Spraying Board in Lyon that opened on June 2 and in a group show at La Galerie Italienne in Paris starting on June 8.

His artwork has made Ememem immensely popular in Lyon. To find out even more about the artist, visit his website and follow him on Facebook or Instagram. His fan and follower count is growing with time. In the near future, he may just start filling the road craters and potholes with his beautiful mosaic artwork in a city near you.