A Gifted and Very Special Illustrator of the Philippines 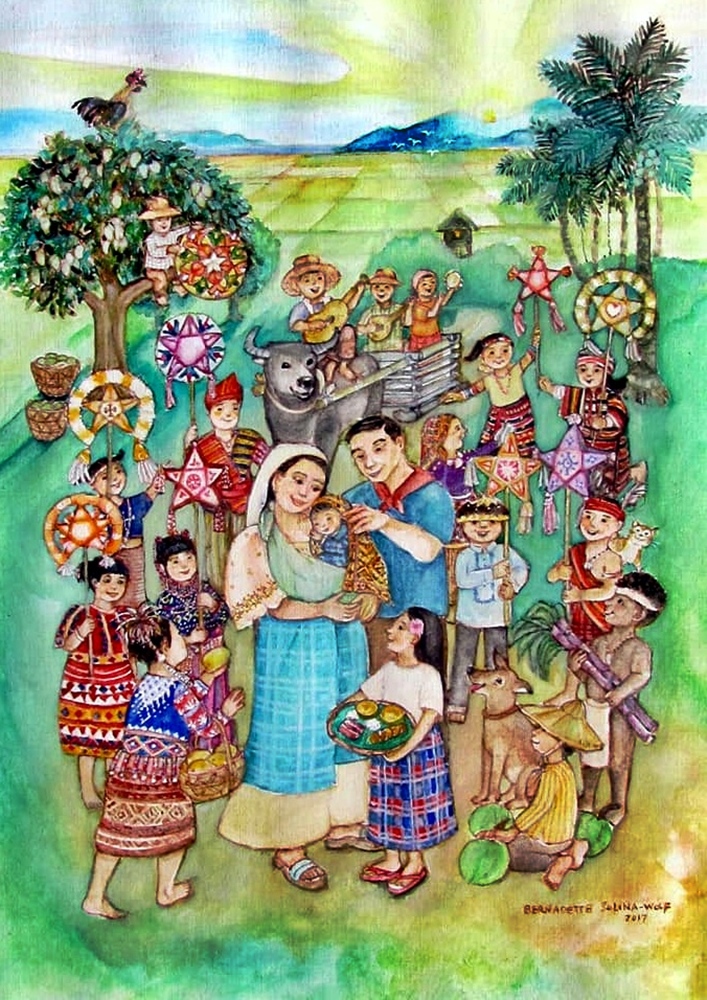 Bernadette Solina Wolf is a gifted painter and children’s book illustrator in the Philippines. She has become a popular illustrator who always includes Philippine patterns and indigenous designs in her artworks.

Please watch the following video: A Gifted Illustrator in the Philippines.

Bernadette has a Bachelor of Arts degree in Visual Communications at the College of Fine Arts, University of the Philippines. She had taught visual arts at the Philippine High School for the Arts for five years.

Living on Puerto Galera, a small island approximately 130 kilometers (81 miles) south of Manila, Bernadette has dedicated herself to illustration for about four decades.

Growing up in a country with 7,107 islands and 134 ethnic tribes, Bernadette is especially fascinated with the Philippines’ cultural diversity. When in the university, she became involved in the university’s puppet theater Teatrong Mulat ng Pilipinas, which focused on Asian traditional puppetry. Serving as an assistant art director, she had to come up with puppet shows with singular Filipino looks and flair to be performed in international puppet festivals.

It allowed Bernadette to have the opportunity to engage in research on different tribal patterns and attires, from the uppermost north to the farthest-reaching south.  And she was both overwhelmed and hooked.

After graduating from the university, she started to use a fusion of Filipino indigenous patterns and colors to illustrate children’s books to help more Filipinos gain further insight into their rich and diverse cultures.

Her works are a body of illustrations for children’s storybooks and stand-alone watercolors and acrylics, mostly depicting Philippine peoples’ attire, endemic plants, animals, furniture, accessories, and even food.

She is also a founding member of the Ilustrador ng Kabataan (INK), an organization of Filipino artists passionate about illustrating and creating children’s books.

The faith that helps Bernadette as an illustrator continue to excel

Bernadette has practiced Falun Dafa along with her husband for over 10 years. She believes that this spiritual discipline based on the universal principles of Truthfulness, Compassion, and Tolerance is the driving force that has helped her continue to excel in illustration. And she will keep on upholding virtue and traditional culture according to these tenets through her illustration.

Bernadette has painted countless fine images and has illustrated 38 books published in the Philippines over the past decades, not including those that are still in the process of being published.

Among the published books, seven are on Goodreads with 137 ratings, including The Rain is Here, Tala, child of Mutya, Ang Malaking Kahon ng Sorpresa, and A Dream and A Melody.

One of the most popular books is The Rain is Here. It’s a children’s book depicting a story of children in a province complete with a bahay kubo (stilt house) and local farm animals in the Philippines. Bernadette’s illustrations in this book have been highly praised by many people at home and abroad.

“The colors were bright, making the pages look attractive. Even the pages where the rain was already pouring were illustrated brilliantly. They didn’t look gloomy. The illustrations were also clean and clear.”

Another popular book illustrated by Bernadette is Ang Malaking Kahon ng Sorpresa (The Big Box of Surprises). It is a story about a boy of an OFW (Overseas Foreign Worker) with a younger sister being taken care of by their grandmother.

Bernadette managed to symbolize the Balikbayan Box as a parent’s love, hopes, and wishes for their children. As Bernadette had the experience of helping a mother when she was in New York City, she thus vividly materialized her memory into the illustrations in the book. What’s even better, seeing the original story only talks about a boy in the manuscript, Bernadette took the initiative to suggest the writer add a sister and a cat to the story, making it even more entertaining, interesting, and fun.

Bernadette and her husband live in a place with many copra farms around. They often see coconuts de-husked and coconut shells are almost ubiquitous in the village. Coconut shells are regarded by many as agricultural waste, but in Bernadette’s eyes, they have become a treasure.

Bernadette took her husband Michael’s idea and started to paint on coconut shells more than 10 years ago. As a result, most of her artworks have found a new genre — painting on coconut shells — which they brand as Nutart.

These artworks painted on the often overlooked coconut shells have been exhibited and traveled on an Outreach Program by the National Historical Commission of the Philippines in their heritage museums for three years. Its last exhibit before the pandemic hit was in the newly opened Binondo Museum in the historic Chinatown of Manila.