With the Help of FaceApp, a 50-Year-Old Japanese Man Fooled Everyone 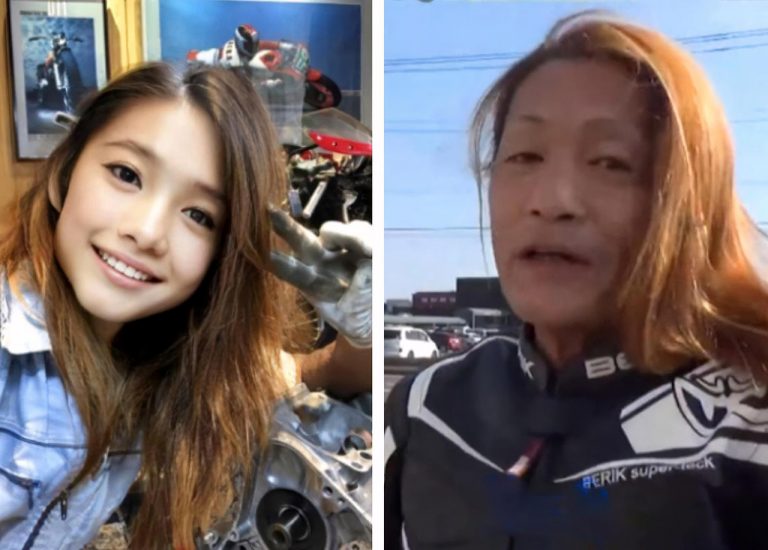 Photos of a smiling young woman with her motorbike proved popular with social media users in Japan and began to notch up hundreds of likes. (Image: Screenshot via Monday Late Show)

Sayings like “don’t judge a book by its cover” have never stopped us from doing just that — judging how something or someone looks. Often, this judgemental tendency of ours makes us victims of catfishing, especially with the use of face editing apps such as FaceApp.

A “youthful” Japanese “female” motorbike rider, who has been exposed as a 50-year-old man with long luscious hair, has attracted a bigger following on social media despite fooling everyone after editing his pictures with FaceApp to alter his image.

People in Japan would have come across the Twitter profile of a smiling and confident young girl who posts about her daily bike journeys across the streets of Japan. The big-eyed girl has a freshness and beauty that many wish to have. Imagine the surprise when the face of a 50-year-old father comes forth as the real person behind this youthful grinning girl.

Yasuo Nakajima, a divorced father-of-three from Ibaraki, northeast of Tokyo, pulled off one of the greatest catfish moments of all time by posing as a young woman known as “Soya no Sohi,” who shares daily updates about her obsession with motorbikes on Twitter.

Yasuo Nakajima used the facial altering application called FaceApp to transform and share his daily life with thousands of followers. While this is a classic case of catfishing — someone posing as another to reap some benefits — he has never lured anyone into fraudulent deals. For him, the popularity that a beautiful girl garners was a way to share his posts with a wider audience.

Going under the username @azusagakuyuki on Twitter, he would upload pictures of himself as a female motorbike enthusiast with a flawless complexion and a seemingly perfect smile after editing his images via FaceApp.

The concept of a man changing his gender online and posing as a beautiful girl is concerning, especially given the rise in sexual crimes around the world, but the technology itself cannot be blamed. Also, the idea of using a fake identity is nothing new. Female writers in the 19th century had to resort to using a man’s name to get their works published. In today’s world, people resort to using apps like FaceApp.

When a Japanese variety show called Monday Late Show revealed the true identity of the beautiful biker girl, it came as a shock to many. While Nakajima admits the face was fake, he emphasized that the person sharing his journey was really him.

As “her” following grew, Nakajima said he only ever wanted to share his love for motorbikes and decided to do so by posing as a younger beautiful woman because he believed no one wanted to see an old man.

Despite catfishing his followers by using FaceApp, Yasuo said most of the responses he has received after unmasking himself have been nothing but positive.

“They said it’s okay. It doesn’t really matter what gender you are… We just support you because we like your tweets because you’re interesting”, he said.

His Twitter page shows hundreds of picturesque photographs showing a pretty girl, often dressed in a motorcycle jacket or posing with Yamaha bikes.

When a fan told Soya: “It’s great to be young,” Soya replied: “Youth does not mean a certain period of life, but how to hold your heart.”

“When I compare how I feel when I started to tweet as a woman and now, I do feel that I’m gradually gravitating toward this persona… this fantasy world that I created,” he said.

His impressive editing skills led to thousands of “likes” and hundreds of “retweets” on his posts.

He told the TV show he enjoyed the feeling of becoming an “online celebrity.”

For Nakajima, the fame and popularity brought in by Soya no Sohi are the only high he has indulged in as he continues to be Sohi and himself on Twitter.