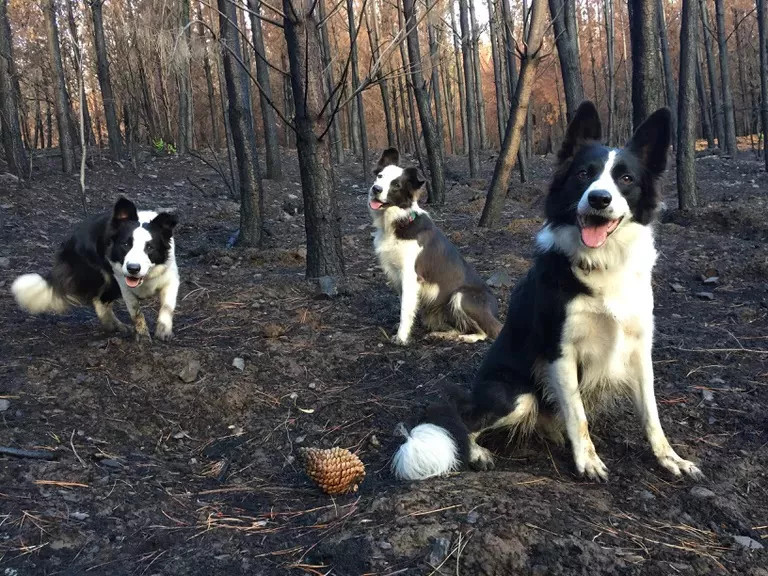 It is not uncommon to find people trying to restore vegetation or forests ravaged by natural calamities. However, it is really inspiring to see border collies reseed forest land ravaged by the wildfires. In early 2017, a huge part of the forest in Chile was devastated by a raging wildfire.

The fire killed 11 people and destroyed several houses as well. The loss, according to the Chilean government, was US$33 million. The wildfires ravaged approximately 593,000 acres of land. After the incident, several environmentalist groups and government entities poured in efforts to restore the greenery of the region. They were joined by 3 canine relief workers, namely 3 border collies.

The dogs belong to dog trainer Francisca Torres. She, along with the 3 dogs, came to the scorched forests in Chile. The dogs wore pouches replete with native seeds. Then the seeds scattered from the pouches and the border collies reseed forest areas as they run through the forests. The efforts have not gone unnoticed and the dogs and their owner have received praise for their endeavors. The dogs are named Das, Summer, and Olivia.

Border collies are known for their hard-working nature and intelligence. They are used extensively for farm work. These dogs can cover up to 18 miles a day without issues. They were found to be useful for reseeding a ravaged forest. Jumping and running through a forest requires plenty of energy and they fit the bill quite well. The border collies can run through varying types of terrain in the forest as well. Another good thing is that these dogs do not get distracted by spotting wildlife species. They were bred to look after sheep herds and so the border collies reseed forest land without getting distracted.

The three border collies that played a major role in reseeding the devastated forests in Chile were trained by Francisca and her sibling Constanza Torres. The sisters said the dogs had a great time jumping and running through the forest. They did a better job of sprinkling plant seeds than human volunteers, they feel. Using dogs is also a cheaper way of doing the task than hiring robots or drones. These dogs love running more than anything. Besides, when dogs are used for reseeding there is almost no damage caused to the environment.

The Torres sisters took their dogs to many forests in Chile that were affected by the wildlife. They did it for nearly 6 months. Francisca owns a dog training facility. Her dogs have worked in over a dozen forests located in the Maule Region. The sisters did get some donations, but they also spent money out of their pockets to buy seeds, supplies, etc. They are glad that their efforts are slowly paying off. The plants are growing in the ravaged region and the forests are coming back to life. The sister duo ensured their beloved dogs were given special treats after accomplishing their tasks. After the border collies reseed forest land, they are given foods they love to gorge on.

Francisca is also active on social media sites where she has over 84,000 followers. She uses platforms like Instagram and Facebook for sharing the activities of her dogs. The reseeding video has been uploaded online as well. She acknowledged the fact that it takes a long time to rebuild a large forest ravaged by wildfire. However, her efforts should encourage many more to come forward with similar endeavors to preserve the environment.