A Young Yo-Yo Ma: The Child Prodigy Who Played to the World 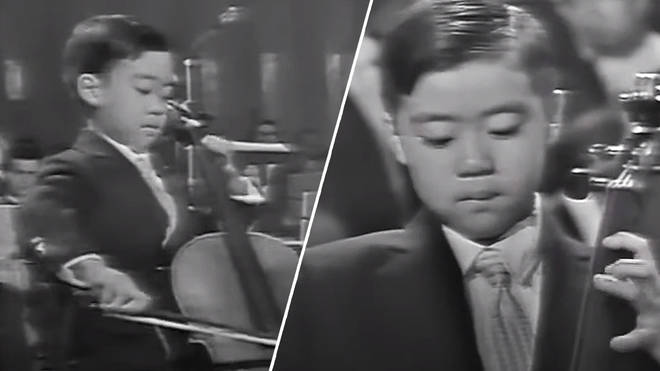 In 1962, a young Yo-Yo Ma played the cello for President J. F. Kennedy at the age of just 7 years old. It was his first public performance on stage. Who knew that the young Yo-Yo Ma would go on to become a famous musician and a cultural figurehead in the coming years?

The Kennedy Center published a video of that evening when the American TV host and conductor of the show, Leonard Bernstein, introduced 7-year-old cellist Yo-Yo Ma along with his 11-year-old sister, Yeou-Cheng Ma. President J. F. Kennedy and Dwight D. Eisenhower were present there in An American Pageant of the Arts in November 1962. The aim of the telecast was to raise funds for the National Cultural Center. The Center was actually established under the administration of Eisenhower and taken care of under Kennedy. When both the young musicians come to the center stage, bow, and then take their seats for playing, a loud round of applause is heard.

The 7-year-old cello prodigy surprised everyone as he played the whole musical piece from memory. He performed the first movement of Jean-Baptiste Breval’s Concertino No. 3 in A Major; Breval is a renowned French composer. He played a duet with his sister playing the piano. Although Ma was a little child, yet his performances abounded in sensations of togetherness and peace.

Leonard Bernstein was himself a stalwart figure as the West Side Story composer and a Mahler champion and he gave a brilliant speech mentioning Ma, saying: “The attraction of our country to foreign artists, and scientists and thinkers, who have come not only to visit us but often to join us as Americans, to become citizens of what to some has historically been the land of opportunity and to others the land of freedom. And in this great tradition, there has come to us, this year, a young man aged seven, bearing the name Yo-Yo Ma.”

Ma was born into a musical family in Paris. Hiao-Tsiun Ma, his father, was a professor of music at Nanjing National Central University, as well as a violinist. His mother, Marina Lu, was a singer. It is very interesting to note that Ma took interest in piano, violin, and the viola from a very young age, but when he was just 4 years old, he settled on the cello. By the time he was 5 years old, he started performing on stage before audiences in France.

Watch the video of young Yo-Yo Ma’s performance in 1962:

When Ma was about 7 years old, his full family shifted to the United States. It was here that he was seen on television for the first time after Pablo Casals, the renowned cellist, drew the organizer’s attention to the young star. In the telecast, Bernstein announced with pride that the 7-year-old child was Chinese, and would be playing old French music for his new American fellow citizens — it was like bringing a world cultural image to the people.

Gradually, with time, Ma became a cultural icon. Ma is regarded as the most celebrated and honored classical cellist in the world with 18 Grammy Awards to his name. From traditional Chinese melodies to American bluegrass, Ma has recorded all kinds of music. Ma is a humanitarian icon and a United Nations Messenger of Peace. He also vouches for the power of music for healing purposes.

Ma’s sister is now Dr. Yeou-Cheng Ma. She has had many collaborations with her brother on stage since their childhood. At the age of 10, she played with the Denver Symphony Orchestra. Currently, she takes an active role in enriching new musical talents. She is the executive director of the Children’s Orchestra Society, New York.