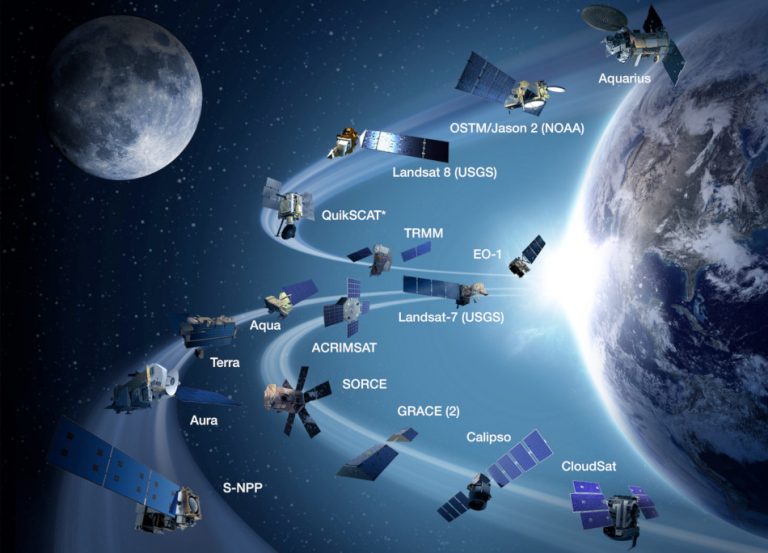 New research has found that the light scattered off satellites and space debris orbiting Earth may be adding at least 10 percent more light to the night sky on the planet. (Image: AIRS via Flickr)

From the broadcasting of major events to tracking major developments on the planet and in the atmosphere, satellites launched by various countries benefit the human population in many ways. However, few are aware that these satellites are also causing light pollution. Results of a new study show that the satellites placed in orbit around the Earth are lighting up the nocturnal sky more than what was understood previously.

Over 40 years ago, the International Astronomical Union made the suggestion that astronomical observatories only be built in areas where light pollution was less than 10 percent. According to the study results, the objects orbiting Earth may actually be elevating night sky luminosity by more than that, meaning there is no longer anywhere on the planet that meets the standard.

Dr. Miroslav Kocifaj, a researcher from the Slovak Academy of Sciences and Comenius University, led the study. He said: “Our primary motivation was to estimate the potential contribution to night sky brightness from external sources, such as space objects in Earth’s orbit. We expected the sky brightness increase would be marginal, if any, but our first theoretical estimates have proved extremely surprising and thus encouraged us to report our results promptly.” (darksky.org)

Instead of looking at the effect of individual satellites or space debris on the night sky, this research examined the impact of space objects taken as a whole, something that’s never been done before. The human eye does not detect space objects as discrete light sources in the way telescopes do. Thus, the presence of satellites and space debris result in a boost in the overall brightness of the nocturnal sky.

John Barentine, a co-author of this study said: “Unlike ground-based light pollution, this kind of artificial light in the night sky can be seen across a large part of the Earth’s surface. Astronomers build observatories far from city lights to seek dark skies, but this form of light pollution has a much larger geographical reach.” (darksky.org)

Astronomers have voiced their dissent about the ever-growing number of objects placed in orbit around the Earth. They have been particular about pointing out the so-called “mega-constellations” — or fleets of various types of communications satellites. The satellites become artificial light sources and as their numbers increase, so does the possibility of collisions. That can lead to the creation of even more space debris. This leads to the night sky appearing more illuminated than it actually is. Entities that have disapproved of the “mega-constellations” include the U.S. National Science Foundation and the United Nations Office for Outer Space Affairs.

Even a few decades back, most satellites were launched by the governments of various countries for search and observation purposes. However, large-sized companies are also launching satellites for enhancing their online services nowadays. SpaceX has launched over 1,000 Starlink communications satellites to enable their global Internet service. Giants like Amazon also have plans for launching their own satellites in the near future.

Astronomers have said that artificial space objects make the night sky overly crowded and this hampers their observation to an extent. There are plenty of satellites circling the Earth already and, in the near future, many more are set to be launched.

The study authors think their work may change the dialog between astronomers and satellite operators as they engage about how best to utilize the orbital space around the planet. According to Barentine: “Our results imply that many more people than just astronomers stand to lose access to pristine night skies. This paper may really change the nature of that conversation.”