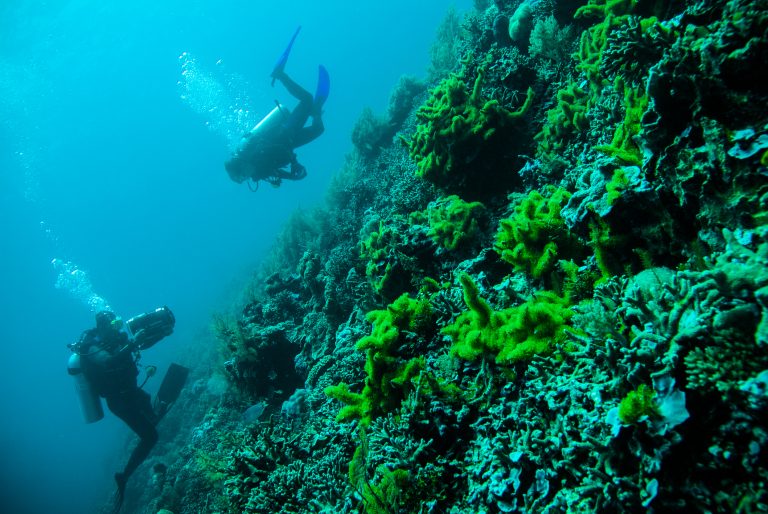 As experienced master scuba divers will attest, Indonesia offers some of the best volcano dive sites in the world. (Image: Fenkie Sumolang via Dreamstime)

As experienced master scuba divers will attest, Indonesia offers some of the best volcano dive sites in the world. Indonesia is one of the most geologically active in the world — in fact, much of the Indonesian archipelago could be described quite simply as one big chain of volcanoes, some still active.

Over the decades, the underwater volcanic craters have turned into popular dive sites. At these volcano dive sites, scuba divers get to witness an amazing diversity of fish and other marine species among the equally amazing geographic formations.

Probably the most well-known of Indonesia’s volcanoes is Krakatoa, famously misidentified as being “East of Java” in the 1969 film title, but in reality, lying west in the strait that separates Java from Sumatra.

Krakatoa erupted catastrophically on August 27, 1883, almost completely destroying the island and killing anywhere between 35,000 and 100,000 people with a deadly combination of pyroclastic flows, ash falls, and tsunamis.  The pressure wave from the final, cataclysmic explosion was recorded around the world and the huge volume of ash propelled into the atmosphere caused average global temperatures to fall by 1.2°C in the year following the eruption.

The Sangeang Volcano, located on the coast of Sumbawa, is another of Indonesia’s prized volcano dive sites. Api Sangeang has not erupted since 2014, but its two cores still send plumes of smoke and ash into the sky. The black sand beaches are amazing and so is the underwater topography. Not only is the site ideal for diving and snorkeling activities, but tourists can explore the fishing village near Bonto. That is where you can watch the making of the fascinating phinisi boats. The diversity of the dive site is amazing. Sandy patches with hydrothermal vents create a steady stream of bubbles. You will also find pygmy seahorses and abundant black coral.

Those seeking deeper diving should head to Tikno. The sandy slope goes down some 31 meters. The variety of sea life is amazing, with orangutan crabs, ornate ghost pipefish, hairy squat lobsters, and hawkfish to name just a few.

Another one of the notable volcano dive sites in Indonesia worth exploring is Banua Wuhu, located in Mahengetang. The place is completely safe and divers need not worry about getting exposed to toxic fumes or active lava flows.

The Mahengetang underwater volcano gave birth to several volcanic craters and isles that eventually disappeared. The last eruption was in 1968 and you can access the active volcano, which has a crater 20 feet beneath the waves. The marine wildlife found here is quite diverse. While the danger of eruption is minimal, divers are asked to wear dive suits to stay safe from the high sulfur content in the water.

There are also some other volcanic dive sites in Indonesia worth exploring. The Batu Tara in the Flores Sea is one example. Divers can also check out Pulau Weh in Sumatra. It is not an active volcano, but you can still spot the bubbling vents on the seafloor. You may also want to visit the Banda Api volcano, which last erupted in 1988.

The volcanic dive sites in Indonesia are deemed to be safe as the Indonesian authorities monitor the geological conditions frequently. However, divers need to use the right swimming attire and gear. If it is the first time you are exploring any of these sites, opting for a guided tour is recommended.